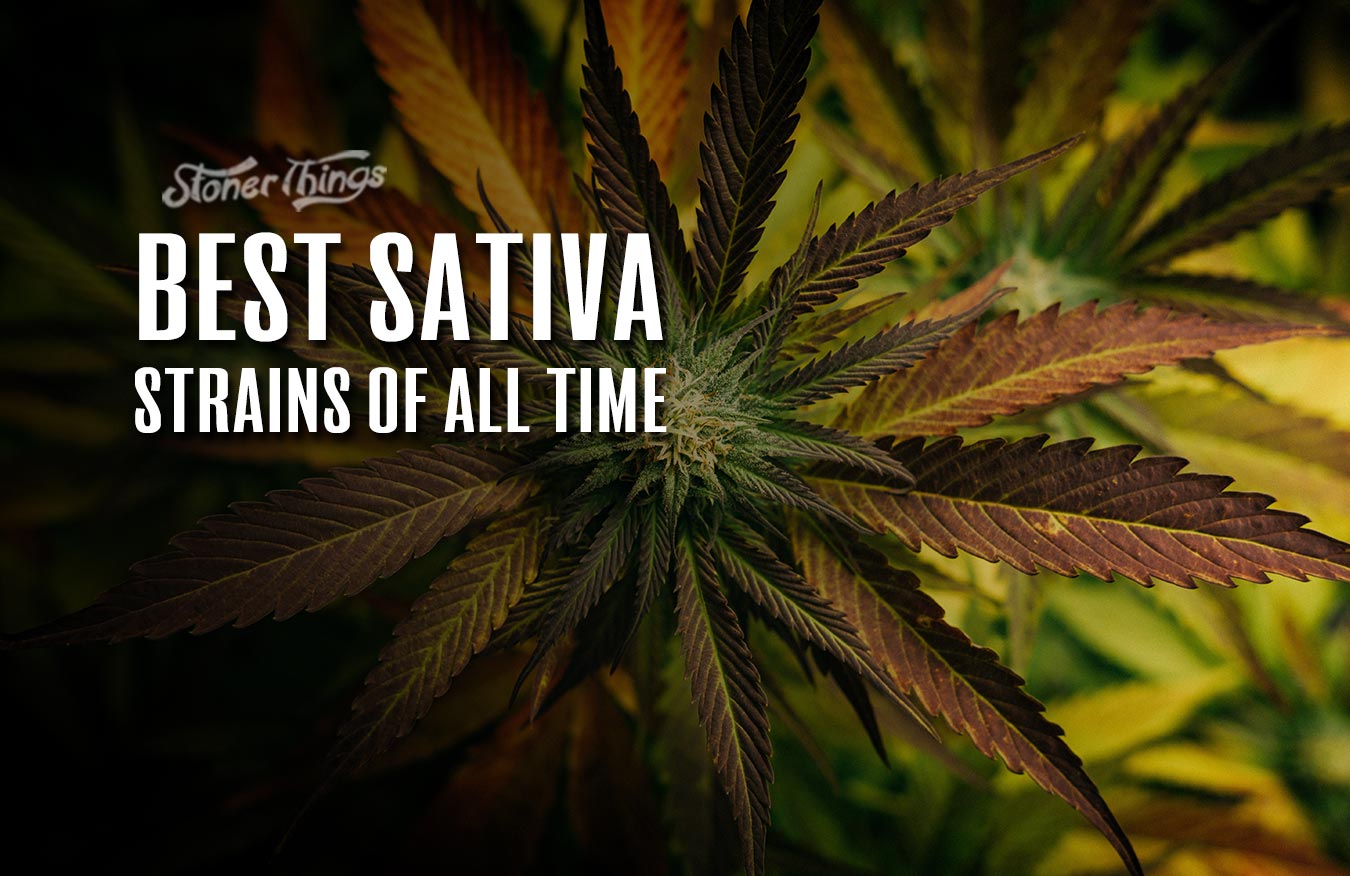 There’s a good reason sativas reign supreme when it comes to the most popular marijuana strains. They offer pep, euphoria, and a heady high perfect for the middle of the day.

But some sativas are in a class above the rest. From Sour Diesel and Blue Dream to Headband and Durban Poison, the best sativa weed comes in many stripes. Here are our choices for the 14 best sativas of all time.

Sour Diesel is a popular sativa weed strain that has earned both its name and its unbeatable reputation. It’s been around for a long time, first appearing in New York City in the early 1990s, and it is known above all for the strong aroma of gasoline it produces.

The taste and smell are also quite sour, naturally, with notes of citrus, earth, and pine needles. The high is mellow, relaxing, and cerebral. You can’t go wrong with this original, one of the best sativa strains in history.

The name doesn’t come up in pop culture as often as it used to, but White Widow is easily one of the best strains of sativa weed on any market, legal or otherwise. First bred in Amsterdam in the early ’90s, this still-popular staple is often described as a balanced hybrid, but the effects definitely swing sativa.

Those effects include potent euphoria, powerful bursts of energy, social pep, and increased creativity. The “white” part of White Widow come from the dense layers of silvery trichome glands covering the bud of this sativa weed. That alone gives a sense of just how strong this strain can be.

Easily one of the best sativa strains of all time, Blue Dream can be found in almost every corner of the United States. It’s a hybrid, but the sativa side almost always wins out. That’s obvious in the upbeat high of this super-soothing sativa weed.

Blue Dream has a long history in California, the state with which it is usually associated. But it was actually born in Florida in the early ’90s before making its way to stardom on the West Coast.

If Jack Herer is one of the all-time best sativa strains, its namesake was an even bigger deal. Jack Herer – the real Jack Herer – was a tireless advocate for reform on behalf of stoners and medical marijuana patients. Within the community, he remains a hero.

The high is clear-headed and energetic, much like the man himself. Also a product of the ’90s, this strain mixes a heavy dose of sativa weed with a smaller portion of indica genetics. That makes it more potent (indica) but also headier and more effective (sativa).

Haze ranks near the top of almost every list of history’s best sativa strains. A parent of countless other favorites, this California native first popped up in the 1960s and has since spread to every corner of the globe. It’s a mix of genes from plants in Mexico, South America, and Asia.

Haze has a spicy aroma with hints of earth and citrus fruit. More importantly, the high produced by this great sativa weed is powerful, energy-inducing, and creative.

One of the many sativa descendants of the original Haze, Super Silver Haze is a great choice for medical marijuana patients who suffer from stress, nausea, or lack of appetite. Like its famous parent, this popular sativa strain is thick with trichomes and generates an uplifting, long-lasting head high.

There are physical effects, too, giving Super Silver Haze just a touch of indica. That fine-tuned combination of effects has made this strain a top choice since the late 1990s, when it won three Cannabis Cup awards in a row.

Anyone who buys pot off the black market has heard the name “Headband” more than once. Probably many times. It’s easy to find almost anywhere, it’s usually pretty cheap, and yet it is clearly one of the best sativa strains available.

A cross of OG Kush and Sour Diesel, Headband comes with frosty buds, a Kushy taste, and an aroma that combines coffee, diesel, spice, citrus, pine, and soil. Potency varies widely, but the best batches are quite strong.

This near-ancient sativa weed strain has made appearances again and again throughout pop culture history. It first came on the scene out of Hawaii in the 1970s, and was one of the most popular sativa strains for decades that followed. It’s alternately known as Maui Wowie, Maui Wowi, and Mowie Wowie, with little agreement on the proper spelling.

But we do know this strain is a favorite for its aroma of pineapples and the tropics. The high is pleasant if not exactly punchy, but Maui Waui is one of the best choices for a day when you don’t need to get blasted.

Don’t let the name fool you: Green Crack sativa weed isn’t especially addictive or bad for you. It certainly won’t kill you. In fact, you may go to your grave with regret if you never try it.

Likely a product of the 1970s, Green Crack remains one of the best sativa strains out there. The taste and smell are sweet and fruity, while the high is powerful, uplifting, and relaxing. This sativa is perfect for reducing stress and relieving chronic pain.

Durban Poison, the last on our list of the best sativas, hails from Africa – specifically, the South African port city of Durban. Its sugary smell and happy, energetic head high have made it a low-key favorite, especially among hardcore stoners.

Few sativas are better for a busy day, but Durban Poison is also great for making edibles and concentrates. Trichomes are plentiful, making this a strong, effective choice, one of the all-time best.

An interesting strain that blends the best qualities of NYC Diesel and Strawberry Cough, Strawberry Diesel can be taken early in the day without impairing your function too much. But that isn’t the only benefit of this blend. Strawberry Diesel also has a delicious flavor and aroma that is reminiscent of strawberries just as its name suggests. Delectable and potent, this one will give you a noticeably pleasant head high without the sluggishness or drowsiness that you would expect from such a powerful herb.

Derives from a cherry phenotype of the now-legendary AK47 strain, this marvelous Sativa is characterized by abundant red-orange hairs that give off a temptingly delicious cherry aroma. A popular strain that has received high marks since it was introduced to the market in 2012, Cherry AK47 tastes just as good as it smells. Smooth, sweet, and mellow, the smoke gives you an idea of the quality genetics that have gone into this blend. Great for morning and anytime of day, Cherry AK47 gives a clear yet powerful head high.

Perhaps a bit more powerful than the rest of the strains in this rundown, Alaskan Thunder Fuck is every bit as bold as its name would imply. Nevertheless, the high never really gets too much if you watch your intake, and it gives you a clear but noticeably powerful head high without leaving you tired. Great for unlocking creativity and letting your imagination run loose, Alaskan Thunder Fuck is also ideally suited for migraine relief.

A lovingly blended offspring of the pure Durban Poison and hybrid Blue Dream, Durban Dream carries every bit of the magic and patency of its forebears. Although it is definitely a Sativa through-and-through, it does have a bit of Indica mixed in by way of a genetic infusion of Blueberry. The result is an out-of-this-world hybrid that somehow manages to keep your feet on the ground.

Leave a comment and let us know: What is your favorite sativa strain?

The 10 Best Indicas of All Time