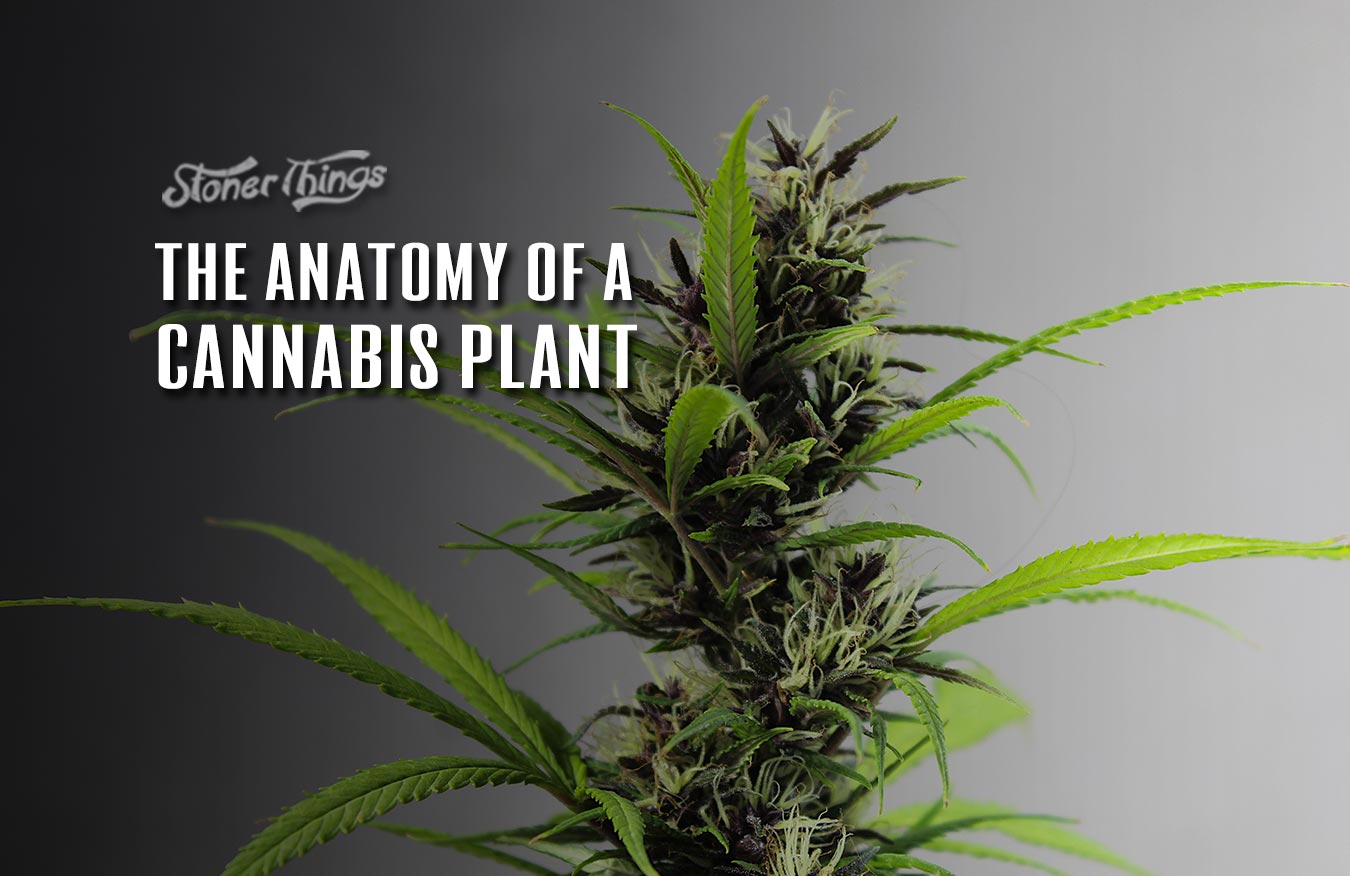 Cannabis can be found all over the world and each piece of it can be used in a ton of different ways, from biofuels to paper. Each part of the plant serves a purpose, and being familiar with them can help inform your experience and appreciation of the plant’s many commercial, medical and recreational uses. Here’s a quick breakdown of the cannabis plant anatomy and what the different parts do within the plant.

The stem is the primary support of the cannabis plant. It’s responsible for transporting water, nutrients, and genetic information from the roots to the rest of the plant. It helps the fan leaves access the light needed for photosynthesis and also supports the colas and large flower structures that help the plant reproduce. The fibers found in cannabis stems are frequently used for paper and textiles.

From the stem, leaves grow. The node is the corner where the stems and leaves intersect. Each node can hold more leaves and offshoots, which are similar to smaller branches. Nodes are also the area where the male and female organs on the plant will develop. Males will grow pollen sacks at the node while females will grow pistils.

The pistil grows from the node. It’s the primary part of a female flower’s reproductive system, containing an ovule and two protruding stigmas. The pistil starts out looking like a lump that begins developing hairs. Pistils are only found on female flowers.

The stigma is a part of a pistil. These are the hair-like structures that protrude from the pistil. They’re used to catch pollen from male plants and fertilize the seeds. If a plant has stigmas, odds are it’s a female. Only female plants produce high concentrations of THC as well as robust terpene profiles. Male plants are typically culled before they’re old enough to reproduce.

Leaves grow from the stem of the cannabis plant. Fan leaves are typically larger and are essential to the plant being able to photosynthesize food from light, though they don’t contain trichomes or other resin glands. In some places, fan leaves are used as animal feed or made into paper.

Unlike fan leaves, Sugar leaves are much smaller and found within the flowers of cannabis plants. Sugar leaves cup the flowers and are called as such because they develop lots of trichomes, giving the leaves a frosted, sugary look. Sugar leaves are typically trimmed from dried flowers, but they are frequently used to make cannabis concentrates like live rosin.

Trichomes are found on the surface of cannabis flowers. They help protect the plant from stress and contain the resinous glands that produce THC. They also produce flavonoids and terpenes in addition to other cannabinoids. They look like little crystalline mushrooms and are responsible for making cannabis plants sticky and crystalline.

There are three main types of trichomes. Non-glandular trichomes are called cystoliths. Bulbous trichomes are found throughout the plant but can’t be seen with the naked eye. Capitate-sessile trichomes are also small and can be found on the undersides of sugar leaves and fan leaves. Capitate-stalked trichomes are visible to the naked eye and appear like mushrooms in structure. This is where the majority of cannabinoids come from.

Bracts are the small leaves that surround the pistils of a female cannabis plant. They’re responsible from protecting the pollinated organs and forming a shield that protects the seed pod from animals and weather as the seeds develop and mature. They typically fall off the plant at the end of the season.

The cola is the main part of a flower found at the end of a female plant’s stem. It’s made up of a handful of smaller clusters of flowers, or buds. The most sought-after flowers are dense, trichome-rich colas, though many plants naturally grow colas that are more loosely structured. Colas are primarily harvested and dried into the flower you purchase at dispensaries, though some will also be made into concentrates.

How to tell the difference between male and female cannabis plants

Distinguishing between male and female plants is important, and the earlier you can separate the two, the better. Only female plants produce THC-rich flowers. The only reason to produce male plants is to pollinate a mother plant and propagate new plants from seed. By the time a plant is about 6 weeks old, you can look at a plant’s nodes and determine the gender.

Male plants will produce pollen sacs. These structures look like tiny little balls, ultimately becoming a bunch of upside down bananas. They look a lot like pistils early on, but become easier to distinguish as they get older. On the other hand, female cannabis plants produce pistils which look like thin hairs at first and then develop into lumpy pistils containing ovules and stigmas. Barring the choice to reproduce new plants through pollination instead of cloning, cultivators should take great care to keep male plants away from female plants.

One pollen spore is all it takes to pollinate a room and ruin a crop by producing seeds. In rare cases, it can cause plants to hermaphrodite, or grow both sets of sex organs. The flowers from hermaphrodites are also full of seeds, making them a poor choice for consumption.