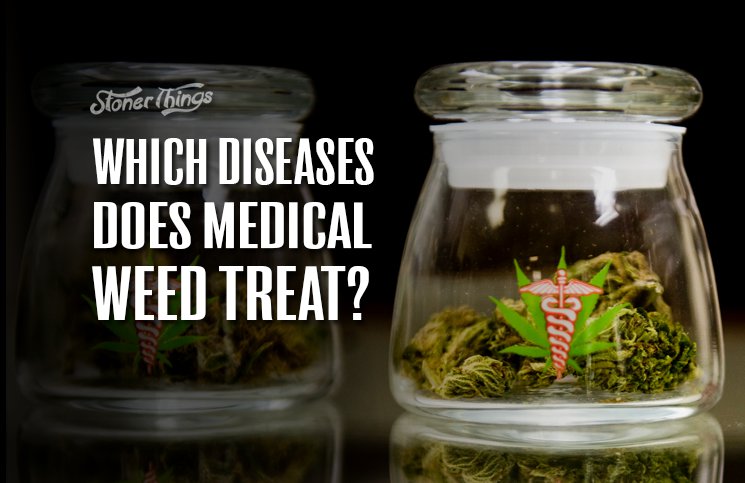 In the early 1990s, scientists discovered an ancient Siberian mummy buried with remnants of cannabis pollen. They later concluded that she died of breast cancer – and took weed to treat it. The find proved that humans have been using marijuana as medicine for at least 2,500 years.

We know a lot more about cannabis and its medical properties now than that anonymous woman knew in her lifetime. And we know it is one of the most beneficial plants available to man. But what exactly can it treat?

To answer that question, here is a non-exclusive list of some of the most common medical uses for marijuana.

There is growing evidence cannabis kills cancerous tumors, but it is also a well-established therapy for the nausea, vomiting, and pain that can accompany chemotherapy and radiation treatments. In fact, this was one of the first reasons scientists became interested in medical weed during the late 20th century.

There was a time, not long ago, when a diagnosis of HIV meant certain death. These days, a raft of potent medications make it possible for people with the virus to lead full lives. Marijuana is an important part of that package. AIDS tends to cause wasting, and weed is known to spur the munchies, so it has become a critical tool in fighting dangerous weight loss, among other symptoms.

Many people with seizure disorders benefit from medicinal cannabis. Scientists still aren’t entirely sure why, but a chemical in pot known as CBD is thought to quiet over-activity in the brain that may lead to convulsions. CBD is especially helpful in treating pediatric epilepsy and has contributed to the explosion of MMJ laws across the country.

Weed is known to alleviate the pain and muscle spasms of multiple sclerosis. For this reason, MS is one of the conditions most commonly covered by states’ MMJ laws. It’s a progressive neurodegenerative disease with no know cure, and while marijuana won’t make it go away, many patients find that it helps substantially.

Pain is the single most common reason people use medical weed. Research backs this up, demonstrating that cannabis is effective in treating pain.

Chronic pain costs Americans more than $600 billion each year, robbing countless workers of productivity and saddling them with enormous medical expenses. In the past, most of these people turned to opiate painkillers such as Vicodin and morphine.

Giving patients a safe, effective alternative could save lives and help suffering patients avoid the additional ravages of addiction. More people die in the United States each year from prescription overdose than from auto accidents.

Crohn’s Disease is a chronic inflammatory disease that afflicts the bowels and digestive tract. It’s relatively common, it’s painful, and it makes life miserable for many of the people who have it. Recent studies have found that weed can send Crohn’s into remission, improve appetite, and counter insomnia without producing adverse effects.

There are numerous mental illnesses that might benefit from medical pot, but Tourette’s has the most science going for it. A neuropsychiatric disorder, it has aspects of both neurological and psychiatric conditions. A series of studies has demonstrated that weed reduces tics and cuts down on obsessive-compulsive behaviors without generating negative side effects.

The science is murky at best when it comes to medical marijuana and mental illness. Some experts worry that cannabis could trigger psychosis or depression, while others feel it’s a safe and often effective treatment for anxiety and mood episodes.

There is growing evidence that MMJ is especially good at treating one mental illness in particular: post-traumatic stress disorder (PTSD). This is a severe anxiety condition triggered by intense trauma.

Soldiers, crime victims, and survivors of natural disasters are among the people most likely to suffer from PTSD. They’re also among the people whose conditions can benefit the most from medical weed.

More states are adding the disorder to the list of conditions covered by medical marijuana law. What’s more, since PTSD is an anxiety disease, MMJ holds out promise for other such conditions, including obsessive-compulsive disorder and agoraphobia.

Dementia remains largely a mystery to medical science, and treatments are few. So it was a sign of great hope when researchers reported last year that medical weed can slow or even prevent the disease.

Alzheimer’s disease is believed to be a result of cellular inflammation in the brain. Gary Wenk, a researcher at The Ohio State University, discovered last year that regular marijuana consumption reduced memory impairment in rats.

Wenk, whose controversial research has stalled for political and financial reasons, said the results, along with surveys of Alzheimer’s patients, show that regular cannabis use in early adulthood could forestall or even prevent the onset of dementia.

Another study released last year found that THC is effective at inhibiting a protein believed to contribute to Alzheimer’s. The study also reported that THC is a safe means of medical treatment.