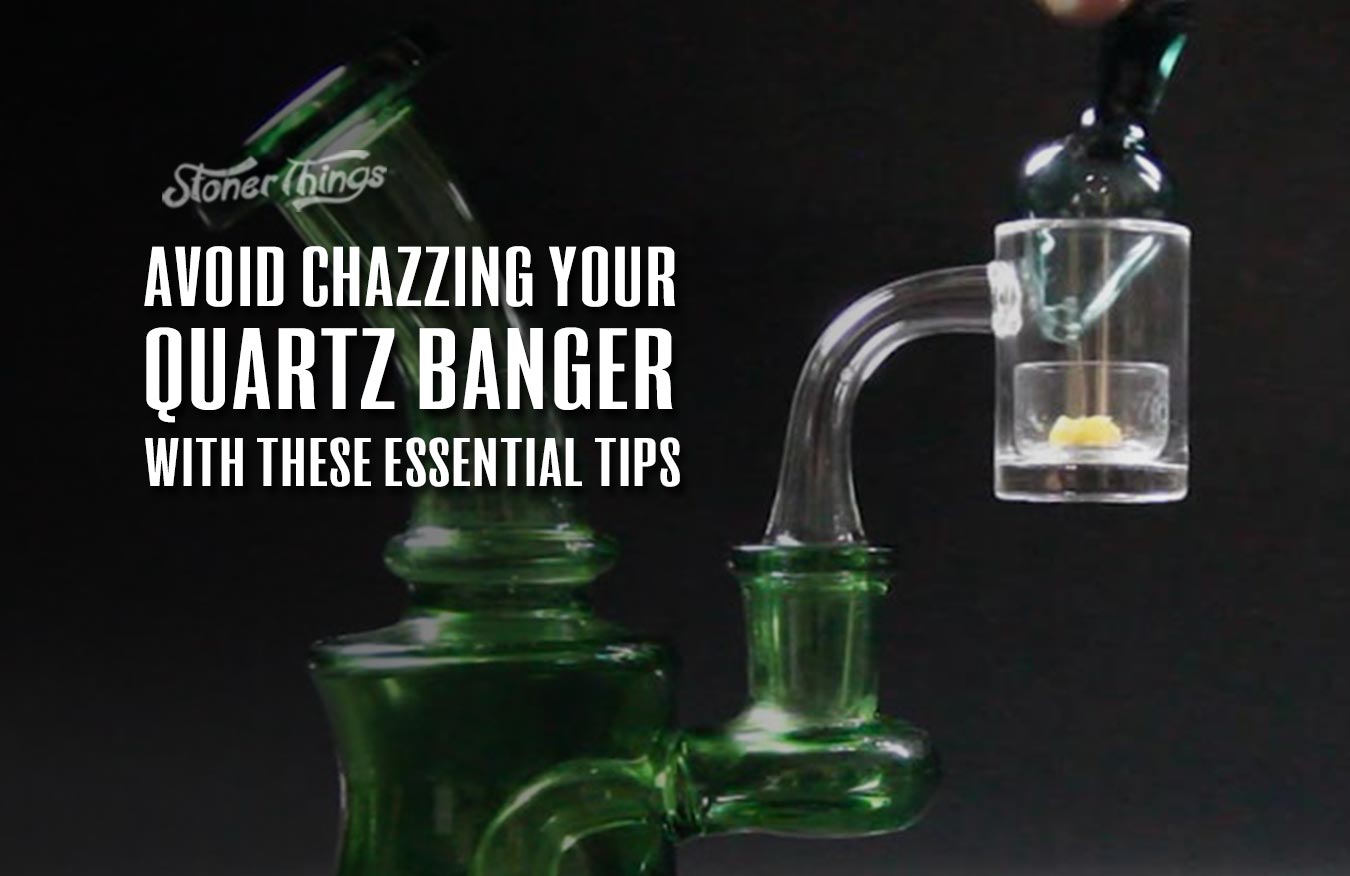 Nobody likes a chazzed banger. They look and taste terrible, but they also don’t hold heat properly so you’re at risk of wasting entire dabs with too much heating or cooling. Luckily, there several different ways to protect your quartz banger from the dangers of chazzing. Check out these tips to keep your quartz looking, tasting and functioning its best.

Switch to the cold start method

One of the leading causes of chazzed bangers is taking dabs at too high of a temperature. A lot of the time, when you’re eyeballing the cooldown time or heating your quartz to glowing red, you run a higher risk of burning dab residue into the quartz. If you’ve ever accidentally taken a super hot dab, it may have left behind carbon deposits that looked like black stains. They do burn away with more heat, but doing this too often really stresses the banger to the point that it chazzes. With that said, you really want to hit those dabs perfectly every time so that those deposits don’t get left behind.

That’s where the cold start dabbing method comes in. If you’re using a torch and a timer without a laser thermometer, you should stick to cold starting to make sure your temperature is perfect before you drop your dab in. In a cold start method, you put your concentrate into your banger and cap it. Then you take your torch and heat it up until the dab vaporizes and not a second longer. You’ll get a pretty perfect low temp dab right from the get go, which is better for flavors and effects, but also prevents chazzing your banger from high heat. When you’re done, just swab it with isopropyl alcohol and you’re set to jet.

Clean your banger after every dab

Even if you take the perfect cold start dab, you can still chazz your banger by reheating the leftover resin in your banger from your previous dab. If you don’t clean your banger after every dab, you’re going to see those carbon deposits we mentioned earlier and you run a much higher risk of chazzing your banger. To avoid that, always clean your banger with isopropyl alcohol and a cotton swab after a dab. Once you take your final hit, give your banger a couple of seconds to cool down a bit so the iso doesn’t evaporate the second it hits the hot nail. But once you’re warm and not cold, you can use a cotton swab and some isopropyl to clean up any leftover residue. Just make sure you allow your banger to dry completely before taking another dab.

With all that said, yes— it can be really annoying to let your nail cool down and clean it up, especially if you’re seshing with friends. But at the end of the day, it’s worth it. You’re protecting your investment, but you’re also giving your friends a better tasting dab by not making them hit your leftovers (which could still burn into the quartz). So try to clean it after every dab for best results.

Use inserts in your banger

If mess is a big problem and you don’t want to clean the nail after every dab, you can use inserts in your banger to help. Inserts are especially important if you like to sesh with friends but don’t want to wait for the nail to cool down to clean in between each hit. Quartz inserts are basically little quartz dishes that you put your concentrates in and then drop into a hot banger. They help with heat distribution so you’re going to get better flavors, but they also help with the mess. As the concentrate vaporizes, it pools into the insert instead of the bottom of the banger. So when you’re done, all you have to do is use a pair of tweezers to remove the insert from the nail and dunk it into some iso.

The banger itself stays pretty clean, so all you have to do is hit anything that splashed with a cotton swab. Then you can reheat the banger and use another insert for the next dab. They’re great for seshing with friends but also keep that residue from burning into your banger, ultimately reducing your risk of chazz.

A lot of people have had some rough experiences with eNails because there’s a bit of a learning curve. If you’re cold starting or just using the torch and timer method, you’re never really sure what temperature you’re hitting your dabs at. eNails on the other hand are set to hold a specific temperature, so they’re a huge culprit for chazzed bangers when they’re used improperly. You don’t want to hit an eNail at anything over 650º F because it will boil out all of the terps and leave behind carbon deposits that cause chazzing.

Ideally you want to shoot for 500 to 650º F to protect the quartz. Your banger is designed to hold heat exceptionally well, so you don’t need anything higher than that to vaporize your concentrates. Anything higher is going to leave you with a super hot, flavorless dab and carbon deposits. To use an eNail, turn it on and set it to 500 to 650º F. When it comes to the correct temperature, turn the eNail off, drop your dab in, and inhale. Clean it after every hit and you’re golden without the need for timers or torches.

Protecting your quartz is the name of the game these days. Nobody wants to hit a chazzed banger, but more importantly you don’t want to throw your money out the window replacing your banger every couple of weeks. But if you follow these tips, you can keep your quartz clear, clean, and fresh for the most flavorful and effective dabs — even with daily use.