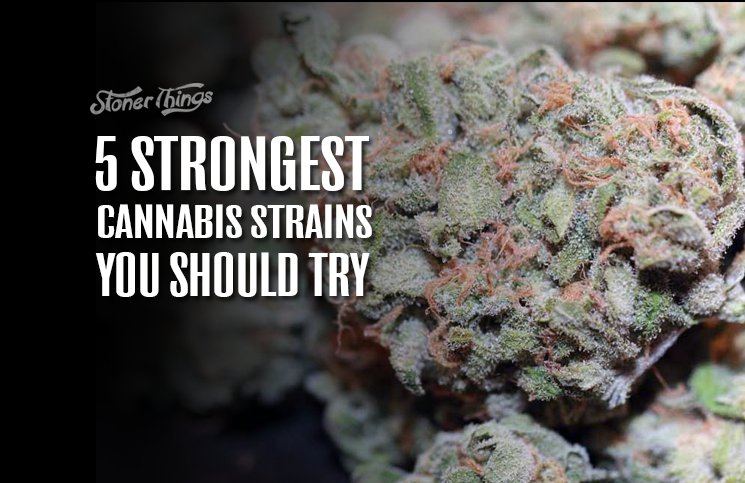 There are literally thousands of different cannabis strains out there with dozens being selectively-bred and released on a nearly daily basis. All of the hard work brought by growers across the world has led to an unprecedented amount of new strains with monstrous THC potency and strength. The weed your parents were smoking back in the 70s is nothing compared to the potent, powerful weed you can find on the shelves at dispensaries these days. Below, we’re breaking down the five strongest high-THC strains in 2021.

Royal Gorilla was first bred by Royal Queens Seeds from a cross between Sour Dubb, Chem Sis and Chocolate Diesel. This potent indica-dominant strain frequently checks in over 30% THC, which is known to couch-lock even veteran smokers. Its effects are primarily in the body where it offers deep-seated pain relief and whole body relaxation. However, it does offer a lightly invigorating mental effect that will leave you feeling cheerful, upbeat and giggly. Between its potency and effects, Royal Gorilla is best enjoyed at nighttime— especially if you like sweet, earthy aromas and piney, citrusy flavors.

Grease Monkey is an indica-dominant cross between Gorilla Glue and Cookies and Cream first propagated by Exotic Genetix. Testing at a massive 31-35% THC, Grease Monkey has quickly become one of the most popular strains of 2021. The strain offers a sweet vanilla aroma and a skunky, fuel-tinged flavor that leads to deep, full-body relaxation and comfortably upbeat mental effects. The strain is an exceptionally high-yielder as well, growing well both indoors and outdoors. Its effects are perfect for pain and nausea as well as insomnia, and are great for chilling at home and getting some much needed rest.

The Toad is an exclusive strain from Mike Tyson’s brand, Tyson Ranch. It’s a hybrid cross between Chemdawg OG and Girl Scout Cookies that has been selectively bred to dump THC. In fact, this strain may be the most powerful strain on this list by far, as it tests anywhere between 31-37% THC. With levels this high, you can expect The Toad to hit just as hard as Tyson himself. Each frosty nug smells of oranges and cinnamon with a fuel-like tinge of flavor alongside rich earthiness and citrus. Its effects are great for lazy days where you can sit and zone out in peace, but it’s also one of the best choices out there for pain relief. If you’re looking for a high yielding strain too, The Toad is for you.

Runtz Muffin checks in at a whopping 29% THC, though it has tested as high as 32% by some growers. First propagated by Barney’s Farm, the Runtz Muffin strain is a balanced hybrid cross between Zkittlez and Gelato. This strain is brand spanking new and smells strongly of citrus fruits with candy-like sweet flavors. It’s a great mellow strain that offers a strong mental lift that helps breed creativity and energy while simultaneously keeping the mind and body feeling relaxed and mellow. The strain is a great choice for everything from hanging out with friends to running errands and even to kicking back and relaxing.

Irish Cream was first bred by Mighty Irish Seeds and is a selective-bred indica-dominant strain made from a cross between two Mighty Irish Hope plants. This heavy hitter checks in at over 27% THC on average, though in some cases it often tests in the low 30% range. Irish Cream is both a high-yielder and a soothing, mellow strain in its effects. Its effects are generally happy and relaxed, leaving you to feel a deep body buzz and a cerebral lift that often has people feeling upbeat and sociable before crashing hard into a restful sleep. Best of all, it offers a rich, dank and herbal flavor and a sweet piney aroma that is to die for. Its name may be a little bit of a misnomer in the flavor aspect, but it’s still one of the top 5 most potent strains in 2021.

Between their insane levels of THC and their richness in terpenes, each strain on this list is guaranteed to help you combat even your toughest symptoms and get your chill on. Best of all, all of these strains are available to grow on your own, if you’re into that. If not, be on the lookout for them at your favorite dispensaries. We’ll be sure to update you when new strains come along and beat these top 5 strains in THC potency.