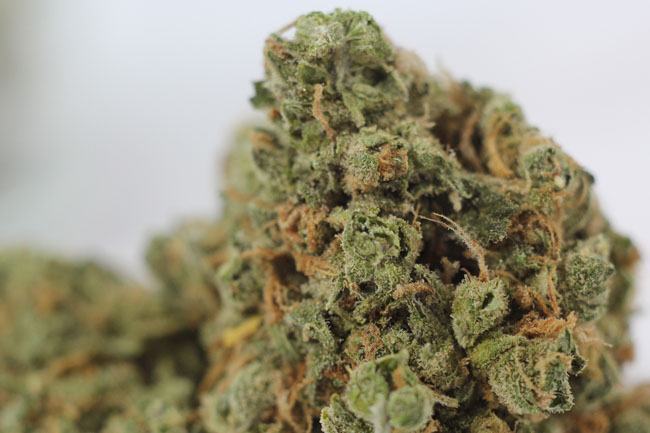 Type: Hybrid.
Genetics: Blueberry X Haze.
Appearance: Very light in color with hints of blue, and is covered with beautiful trichomes.
Smell: Blueberry and pine.
Potency: Easily a 5/5 for potency. Very potent strain across the board.
Taste: The smoke is very smooth considering the potency and has an aftertaste of blueberry popsicle.
Summary: Blue Dream leaves the cannabis connoisseur very happy, with great marks overall.

One of the most popular sativa-dominant strains being grown today, Blue Dream, a hybrid of the Blueberry and Silver Haze genetic lines, is a true staple in the world of medical marijuana.

Its popularity amongst growers and patients alike means that one will encounter both well-grown and poorly-grown medicine bearing this label. 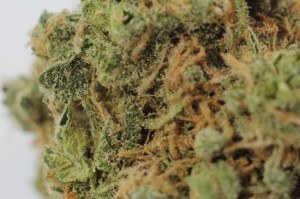 When properly grown and cured, Blue Dream is one of the most identifiable strains today. Its buds are a pale green-white color, sometimes appearing to have a blue hue when examined alongside different strains. The pistils, or “hairs”, on the buds are a unique peach-orange color that easily sets the strain apart from many with the more common red-brown pistil color.

Blue Dream’s buds typically grow into a more elongated “bean pod” shape, rather than the squat “rosebud” shape found in other strains. The density of the bus is usually medium, even when different growing methods are used; Blue Dream is not often a physical “heavyweight”, nor is it loose and airy.

Its most discernable qualities, though, are its aroma and flavor. Blue Dream has a strongly detectable floral scene, with a sweet note that is commonly balanced by a soap-like quality that keeps the sweetness subtle. When smoked, Blue Dream’s terpenoids (the volatile chemical compounds that give marijuana its smell and taste) seem to be minimally altered, such that its smoke has a fragrance strikingly similar to that of the fresh, unburned buds. Many strains do not seem to follow this behavior when smoked – that all have a predictable skunky/smoky smell – but Blue Dream is one of the few whose burned smell will identify it to your nose every time, and remind you that this is no run-of-the-mill strain.

Blue Dream’s high is commonly regarded as a wakeful one, used when some level of mental focus is desired. Anxiety, paranoia, and attention deficits can be mitigated when using Blue Dream. It can function as a relaxer and pain reliever in some people, but due to its sativa dominance, might not be as effective as some indica strains.