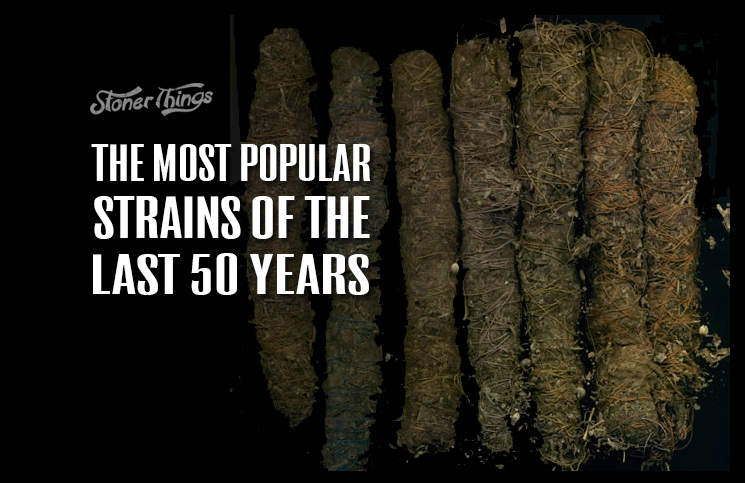 First-time pot smokers are often surprised to learn how many choices there are. Available marijuana strains number by the hundreds, if not the thousands, and like a selection of fine wine, each has its own unique qualities: flavor, aroma, euphoria.

Cannabis has always come in strains, but their modern proliferation is strictly a result of intentional cross-breeding by farmers. So how have the most popular strains changed over time? Here’s a primer of the best-loved strains of the last half century. No generation has one absolute “favorite” strain, but the closest thing to that in the 1960s was probably Acapulco Gold. The name still evokes scenes of young surfers trafficking pot cross-country in Volkswagen vans, as well as the era’s many drum circles, communes, and free blues festivals.

Acapulco Gold is still around, and with good reason. A peppy sativa, it’s been baked into stoner lore over the years, with a reputation that hasn’t diminished with time. In fact, this strain won top sativa at the 2010 Cannabis Cup awards, five decades after it became the go-to choice of the Baby Boom. There’s a common misconception, spread far and wide by people who oppose marijuana reform, that weed is much stronger these days than it used to be. There is probably a kernel of truth to this, as today’s most potent strains are unquestionably stronger than the top strains of yesteryear. But that doesn’t mean much.

We know the best strains of the 1960s and ’70s were pretty strong because we’re still growing many of them, and they don’t seem to be any weaker than most modern choices. Unfortunately, Thai Stick isn’t one of the strains that stuck around, vanishing after the end of the Vietnam War as trafficking routes dried up and Asian countries cracked down on the drug trade. It’s hard to imagine today, with so much selection, but early stoners were often stuck with little choice in what they toked. Until the advent of medical marijuana in California, “schwag” was the most widespread form of cannabis: cheap and weak, often shipped across the border from Mexico in degraded brick form.

But as cocaine swept the country in the go-go ’80s, better varieties of marijuana were also spreading. Maui Waui was a sign of that growth, breaking into the public consciousness thanks to 1979’s Up in Smoke, the first movie by Cheech and Chong. The strain is still popular, though it no longer tops many lists.

In 1996 California voters made their state the first to legalize medical cannabis. This was the point at which the availability of choice strains exploded. One of the earliest commercial favorites was Blue Dream, a West Coast hybrid that leans toward the pep of a sativa while relieving stress with its indica genes.

Blue Dream remains hugely popular nationwide, especially as medicine. Its versatility proved that marijuana strains can be grown for niche uses while still appealing to the masses. It’s a winning recipe that growers have emulated for the last 20 years. Easily one of the most potent and beloved strains of all time, OG Kush showed up on the Pacific Coast in the late 1990s, but it didn’t really take off until at least 2000. Around that time, it became a staple of rap songs, the “OG” translated to “original gangster.”

So what does “OG” really mean? We’re not sure, and neither is anyone else. Possibilities include Ocean Grow, OverGrow, Original Genetics, and even Original Gangster, though that term didn’t show up in hip hop until after OG Kush started its rapid spread. Either way, OG Kush dramatically boosted the cachet of unique strains of weed.

Tell us: What do you think was the best strain of all time? What’s your personal favorite? Comment below.