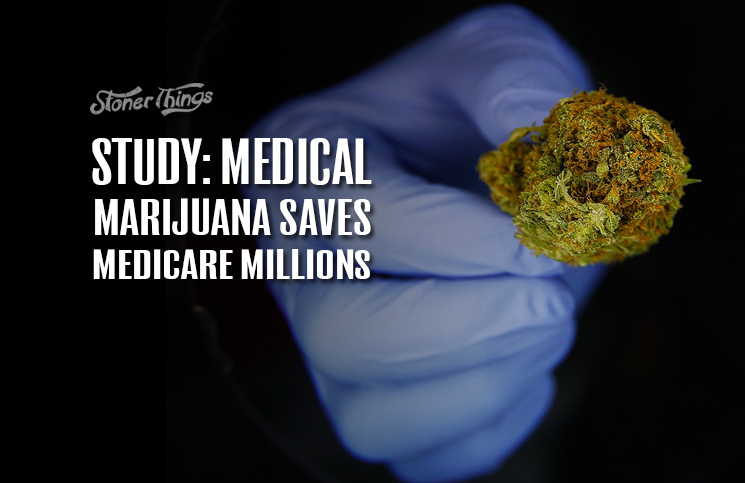 A new study suggests that states where medical marijuana is legal put less strain on Medicare and see less use of prescription medications.

In a nation with an epidemic of prescription drug abuse, that could be a very positive sign. It’s also good news for government regulators and lawmakers, who continue to look for ways to preserve Medicare funding in coming decades.

The study found that the District of Columbia and 17 states where full medical marijuana is legal saved roughly $165 million in Medicare spending in 2013. Conducted by scientists at the University of Georgia, the report was published in July in the journal Health Affairs.

“The results suggest that if all states had implemented medical marijuana, the overall savings to Medicare would have been around $468 million,” the research team said in a press statement.

The researchers examined the quantity of medical prescriptions for treatment of various conditions, including chronic pain. Specifically, they studied prescriptions filled through Medicare’s Prescription Drug Plan, also known as Part D, between 2010 and 2013.

They then focused on prescriptions that could be replaced by medicinal cannabis in states where the drug is legal for that use. In addition to pain, the diseases they studied include anxiety, depression, nausea, glaucoma, psychosis, insomnia, seizures, and spastic disorders such as multiple sclerosis.

Researchers paid special attention to glaucoma, a serious eye condition that can be effectively treated with cannabis. Glaucoma is extremely painful and can end in blindness, but regular marijuana use has been proven to decrease ocular pressure by 25 percent.

“It turns out that glaucoma is one of the most Googled searches linked to marijuana, right after pain,” said Dr. David Bradford of the university’s School of Public and International Affairs.

But unlike some of the other diseases, the symptoms of glaucoma return rapidly after using, and it would be unrealistic to expect patients to smoke often enough to prevent those relapses. That means the number of prescriptions for this condition shouldn’t drop – just as the study found.

In other words, medical cannabis patients use the drug because it works, not because they feel like getting high for the fun of it.

“The results suggest people are really using marijuana as medicine and not just using it for recreational purposes,” said the study’s lead author, Ashley Bradford, who added that she hoped “this research will influence and reform policy making.”

The report focused mostly on the financial savings of medical pot to the government and taxpayers, but there are other benefits as well. Less reliance on prescription drugs could help reduce the wave of opioid overdose deaths sweeping the United States.

“We now know that overdoses from prescription opioid pain relievers are a driving factor in the 15-year increase in opioid overdose deaths,” according to the Centers for Disease Control and Prevention. “Since 1999, the amount of prescription opioids sold in the U.S. nearly quadrupled, yet there has not been an overall change in the amount of pain that Americans report.”