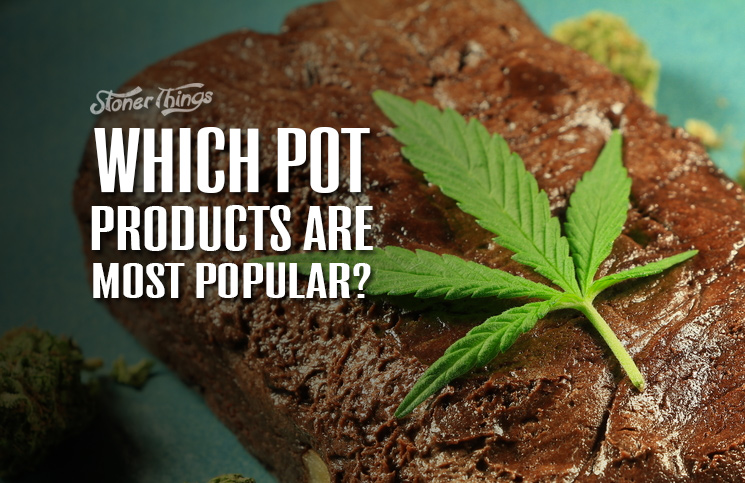 Time was, stoners had limited options when it came to using marijuana. There were pipes carved out of apples, of course, and homemade gravity bongs, and even hashish, but that was about it.

How times have changed. 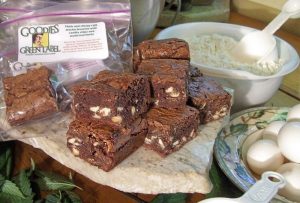 It’s still pretty easy to find weed, buy it, and smoke it the old-fashioned way. But there is a host of alternatives now: hash oil, topicals, tinctures, and the list goes on. It’s enough to make a pothead dizzy without toking.

Thanks to the rapid spread of legalization over the last few years, along with a nationwide boom in retail medical marijuana dispensaries, customers have easy access to almost any cannabis product the mind can conjure.

Edibles. Shatter. Lotions. These products and many others are sold widely in Colorado, Washington, and Oregon, the three states where commercial marijuana sales are now legal. Alaska and the District of Columbia, where pot is legal to buy and use, have yet to approve retail shops or pass regulations on non-smokeables.

So what are the most popular legal cannabis products? Is no-frills bud still the king? And what are the up-and-comers you should know about to impress your friends?

Here are a couple of charts published by Priceeconomics on the relative success of various infused products. 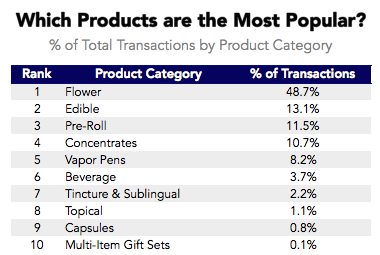 The company’s data came from its customer Headset, a dataset that tracks cannabis retail transactions. The statistics cover about 25 percent of legal pot sales in Washington State, giving at least a limited idea of what products sell best across the country.

Nor surprisingly, traditional marijuana flower comes out on top. Dried bud accounts for 49 percent of transactions, making it by far the most popular form of cannabis. Edibles, meanwhile, comes in second at 13 percent of all sales. But a variety of other products, from wax and alcohol-based tinctures to topicals and iced coffee, add up to another 20 percent. 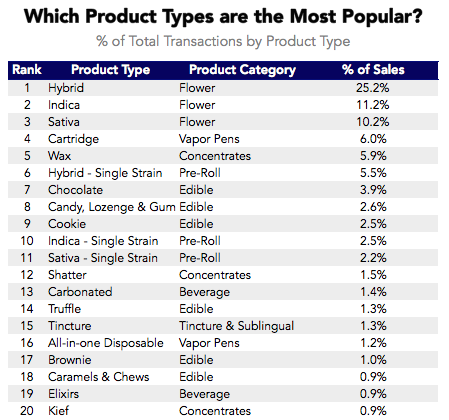 Hash oil and edibles are climbing especially fast, Proceeconomics reported, and while flower remains the biggest seller by a wide margin, these products are already more profitable. Edibles generate the most profit.

Flower itself comes in several forms. The most popular is simple packaged bud, but many customers prefer pre-rolled joints, which typically sell for $10 to $15 and account for 11 percent of all Washington cannabis sales.

Vaporizers and vape oils, meanwhile, fall somewhere in the middle of the list. The relatively slow sales of these products and concentrates such as hash oil suggest their potency is high enough that customers buy less. 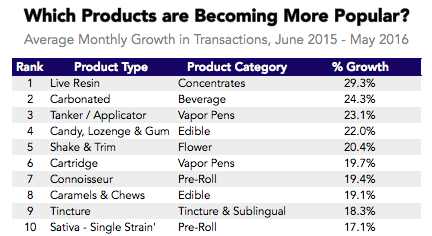 An analysis of flower sales found that hybrid strains sell better than any other product, accounting for 25 percent of all cannabis sales. Indica is the second-most popular strain at 11 percent, followed by sativa at 10 percent of all transactions. That might come as a surprise to many stoners, given the widespread perception that sativas are more popular than indicas.

Vape cartridges and wax rank fourth and fifth on the Priceeconomics list, respectively. But edibles claim the most sales behind bud. Curiously, brownies and cookies sell less frequently than newer treats, such as chocolates and Truffles. Infused beverages are also increasingly popular, with carbonated drinks ranking at No. 13 on the list of best-selling products.