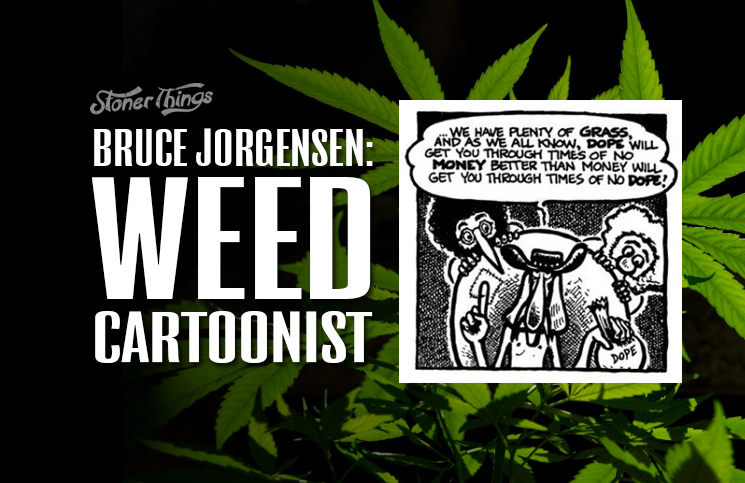 Bruce Jorgensen has been doing this for a long time. Possibly as long as you’ve been alive – longer, even. But odds are good you’ve never seen him, heard of him, or come across his work before, unless maybe you launched your stoner career before the Tet Offensive.

So who is Bruce, aka “Jorgy”; why do the best-informed potheads see him as an old-school radical; and why does he matter to you, to other sparkers, and to the pot community as a whole? Here’s an illustrated explanation.

Jorgy is a cartoonist best known for his sharp, wry editorial drawings with explicit marijuana themes. He started creating them in the late 1960s, following the birth of the movement to end cannabis prohibition in America. And the series drew the attention and chuckles of reformers and civil liberties activists for years afterward.

That means Jorgy – strictly a pen name for Bruce – has put his artistic talent and sharp political voice in front of some big-name readers over the years. Jorgy created hundreds of cartoons through the ’60s and ’70s, selling the panels to High Times and another 350 or so newspapers and magazines spread across North America. He drew four panels a week at the height of his career.

Resistance to cannabis prohibition has remained much the same

The later panel, published in High Times in September 1980, gives us a sense of how much those times have stayed the same. “Lobbying to overturn cannabis prohibition was already a decade old, and encountering the same mindless resistance we deal with today,” Bruce wrote.

The cartoon features a lobbyist trying to convince a fat-cat lawmaker in Washington, D.C., to support legalization of marijuana. The politician replies: “I know it’d add billions in revenue, create jobs in depressed regions, aid the balance of trade and relieve over 20 million citizens of their criminal status – but what’s a good political reason?”

The older cartoon, which ran in the April 1977 issue of High Times, shows a couple lighting a joint on a passenger train while scanning the compartment for drug-sniffing dogs – all the while ignoring a human-size canine spying over their shoulders. 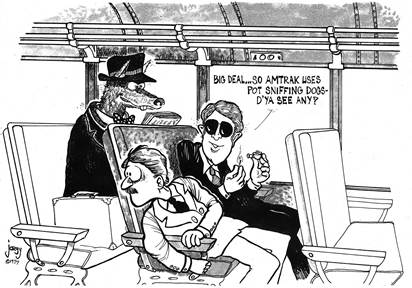 “Pot-sniffing dogs had become a fixture of American life by this time,” Bruce says. “This particular story was about a Georgian German shepherd named Blitz, who had dimed out 2,000 lbs of cannabis and caused 50 arrests. 39 years later this nonsense continues.”

There has been some progress. Four states and the District of Columbia now allow marijuana use for adult recreation, while more than two dozen others permit some degree of medical cannabis. And train passengers have less to sweat about these days than they did in the late ’70s: Amtrak dogs are trained almost exclusively to detect guns and bombs, not drugs.

Tell us: Had you heard of Bruce Jorgensen before? What do you think of his art? Leave us a comment.