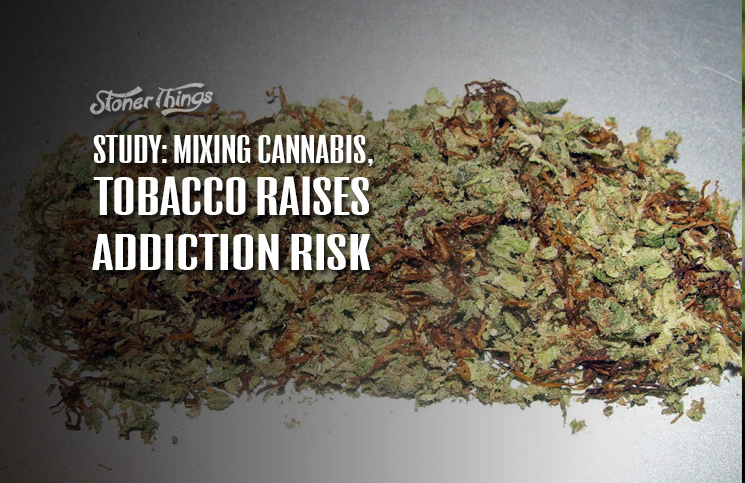 Tobacco kills – we all know that. And it’s probably common knowledge that a large percentage of marijuana users also smoke tobacco. That, as it turns out, is an especially bad idea.

A new study out of the United Kingdom reports that mixing tobacco with cannabis, as many stoners do, increases the risk they’ll become addicted to either drug, or both.

“Cannabis dependence and tobacco dependence manifest in similar ways, so it is often difficult to separate these out in people who use both drugs,” said lead author Chandni Hindocha, a Ph.D candidate at University College London. “Cannabis is less addictive than tobacco, but we show here that mixing tobacco with cannabis lowers the motivation to quit using these drugs.”

Tobacco and pot are among the most popular recreational drugs in the world: Nearly 200 million people use marijuana while roughly 1 billion smoke or chew tobacco products. In many countries it’s common for cannabis users to mix the drug with tobacco, for at least two reasons.

For one, mixing is cheaper than smoking weed and cigarettes separately, since it delivers both drugs while satisfying psychological cravings for nicotine. For another, tobacco may heighten marijuana potency, as it increases the efficiency of smoke inhalation.

The consequences of longtime tobacco use can be severe. Cigarettes kill nearly half a million Americans each year, more than any other intoxicating or addictive drug. Pot smoking can also lead to addiction, thought it’s typically much less damaging and easier to break.

Heavy cannabis use can lead to memory and cognitive problems, though they are strictly temporary and lift when marijuana is no longer used. The drug’s only serious long-term effect is chronic bronchitis, a condition that often amounts to a persistent but mild cough.

The new study was published by scientists working with Hindocha, as well as researchers from the University of Queensland in Australia, King’s College London, and the National Health Service. The team examined responses from a 2014 survey of 34,000 subjects from 18 countries.

The study is the first of its kind to explore how many people around the world use various methods of consuming marijuana. The results showed these methods vary widely between countries, with spliffs – joints or blunts containing both cannabis and tobacco – most popular in Europe and least popular in the Americas.

For example, just 4.4 percent of U.S. residents use spliffs, along with 6.9 percent of Mexicans and 16 percent of Canadians. Spliffs are also rare in South and Central America. Vaporizers, on the other hand, are most popular in the Americas and less prominent elsewhere.

But the study’s central finding suggests a combination of marijuana and tobacco in the same joint, blunt, or bowl raises the risk of addiction to both, even more than using both drugs separately. What’s more, scientists learned that smokers who mix are less likely to seek professional help for addiction: Those who don’t mix were 62 percent more likely to want help for cannabis dependence and 81 percent more likely to want help for tobacco addiction.

“Our results highlight the importance of routes of administration when considering the health effects of cannabis and show that the co-administration of tobacco and cannabis is associated with decreased motivation to cease tobacco use, and to seek help for ceasing the use of tobacco and cannabis,” said Michael Lynskey, professor of addictions at the Institute of Psychiatry, Psychology and Neuroscience at King’s College London. “Given a changing legislative environment surrounding access to cannabis in many jurisdictions, increased research focus should be given to reducing the use of routes of administration that involve the co-administration of tobacco.”

In other words, spliff aficionados may want to reconsider.

Tell us: Do you smoke spliffs? Does the study make it any more likely you’ll quit smoking tobacco?