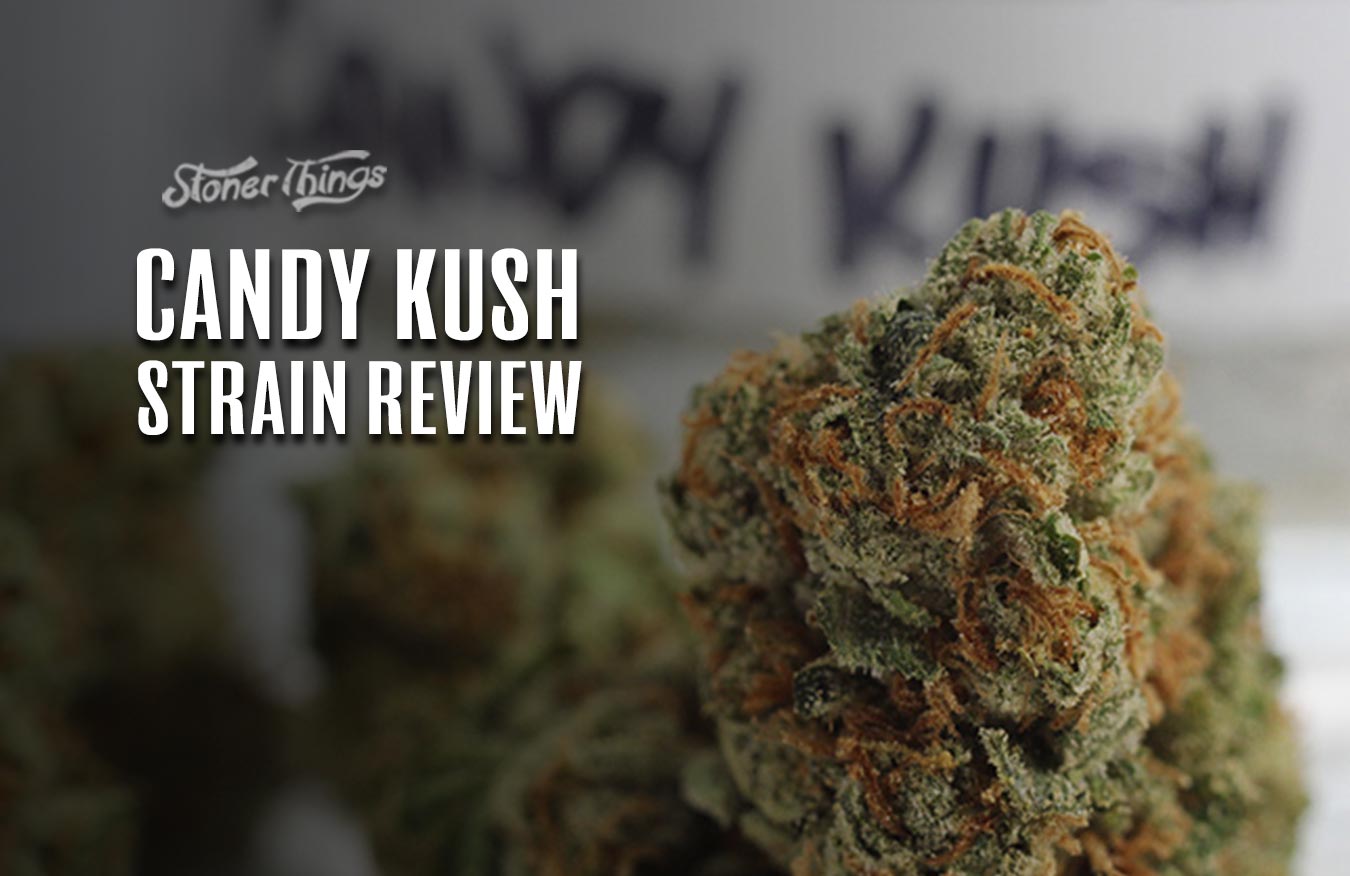 Candy Kush is a super popular strain in the medical marijuana scene, so it can be found pretty much everywhere. Beloved for its piney, lemon aroma and its sharp sugary sweetness, Candy Kush earned its popularity. This balanced hybrid checks in around 15-20% THC and offers some seriously great effects. Learn more about it in our all-encompassing Candy Kush review, which covers everything you need to know about its scent, flavor, effects, medical uses, lineage, appearance and potency levels.

Candy Kush, also known as Kandy Kush, was first propagated by DNA Classics. The strain is believed to be a true hybrid made by crossing the famous OG Kush and the equally famous Trainwreck. Though there is a little controversy about which phenotypes of each parent were used. For example, many believe that the OG Kush pheno used to make Candy Kush weed was the Cristopher Wallace cut of OG Kush. The same can be said for Trainwreck. Candy Kush seeds may throw more Trainwreck-leaning phenotypes that offer more sativa-dominant effects.

Regardless, true Candy Kush falls somewhere in between a sativa and an indica. Genetically speaking, it’s a 60/40 indica-dominant hybrid, but it tends to offer a good mix of soothing body and invigorating mental effects. With the perfect balance of physical and mental relief coupled with 15-20% THC levels, the strain is the perfect choice for recreational and medical users at all levels of comfortability with weed.

There’s a lot to like about its effects, but Candy Kush cannabis is also a visual treat. These medium-dense, spade-shaped flowers throw shades of light green and yellow alongside contrasting emerald-colored water leaves. Its pistils are a vibrant, fiery shade of red. Each bud is completely coated in a silvery white sheen of trichomes to give the buds an out-of-this-world look.

Background information aside, the Candy Kush weed strain surged in popularity for its unique scents, flavors and effects. On the nose, the strain is overwhelmingly earthy and sweet, with that unique kush-tinged funk common of everything that comes from the kush family of strains. While growing, Candy Kush marijuana plants take on a wet earthiness that tends to refine as the flowers begin to bloom. With age, fresh and herbal notes come forward, often compared to a sweet pear or honeyed aroma alongside a ripe citrusy sweetness. Dried flowers reek too, though. Grinding Candy Kush up releases a lot of those sharp kush-tinged notes as well as a potent earthy sweetness that is sure to get your mouth watering.

Speaking of which, the taste itself is just as impressive, if not more so. On the first inhale you’ll be met with those sharp lemony notes alongside earthier, piney notes. The smoke is pretty thick, but it’s also overwhelmingly sweet so it balances out a lot of those sharper notes. But the best impression of the strain is of course in its aftertaste. As you breathe the smoke out, it’ll leave behind a sweet pear-like flavor alongside a dank, rich earthiness that feels overall very tasty.

As you breathe out that final exhale, the effects of the Candy Kush strain have already taken hold. The first impression is of a general mental lift that feels warm and welcoming. It chases away feelings of stress with a chokehold on happiness-amplifying euphoria that may fade way to the giggles in higher doses. It’s really a perfect strain for going about your business and feeling your best. However, in higher doses it may also help with creativity and focus. Alternatively, as a hybrid, it’s buzzy body effects may leave you feeling couch locked in high doses. A balanced hit makes for a good mix of physical relief and mental relaxation that might leave you feeling happy, relaxed, hungry, and ready for whatever your day may have in store.

Between the balanced physical and mental effects and an approachable THC level (15-20%), Candy Kush makes one of the best medical strains out there. The mentally lifting effects are great for combatting chronic stress, PTSD, depression, or anxiety. Its gentle focusing effects may also be great against ADD/ADHD. However the strain also really shines in a physical sense. It’s known for causing a severe case of the munchies which is excellent if you experience a lack of appetite from other medications. It may also help with aches and pains, headaches and migraines, nausea, or insomnia.

All in all, Candy Kush is one of those strains you don’t want to miss. Whether you’re in need of some deep physical or mental relief or you’re just looking for a way to feel your best while you muddle through your daily chores, Candy Kush is a fantastic strain option for practically every time of day regardless of what kinds of activities you may be getting into. If potency, mixed effects, and drool-worthy flavors mean a lot to you, be sure to try Candy Kush the next time you see it at your favorite dispensary.