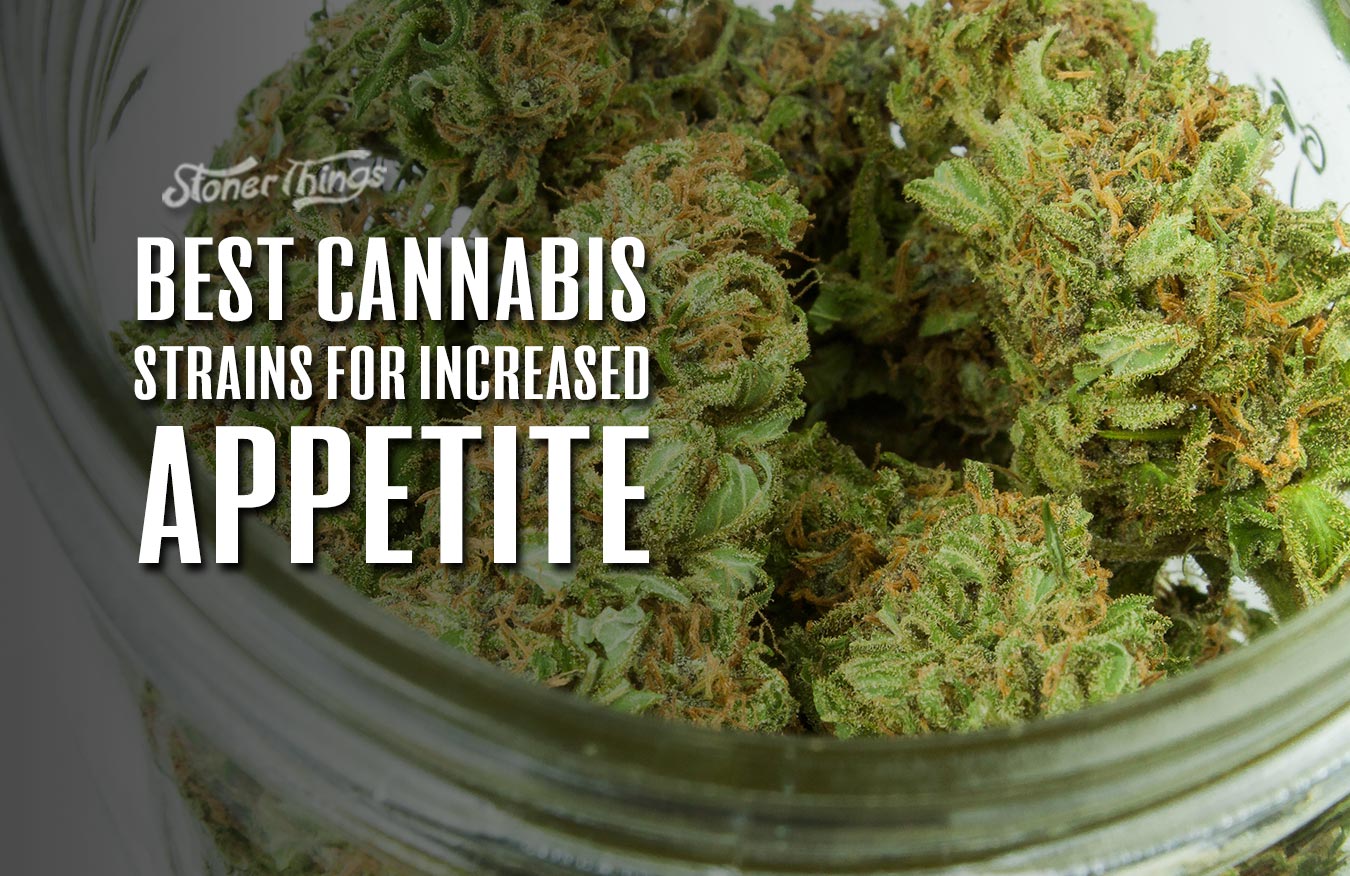 Is stress messing up your appetite? Weed can help with that. Below we’re breaking down some of the best strains for an appetite boost, along with the science behind it.

Why does weed cause the munchies, anyway?

The hunger-inducing effect you feel when you smoke weed is known as a case of the munchies. The munchies is one of the most common side effect of smoking weed, so it’s been studied relatively extensively. Since it triggers an appetite, lots of medical patients use it to combat the lack of appetite caused by certain medications, treatments, or otherwise. However, sometimes stress itself is an appetite killer, and the cannabinoids and terpenes found in weed are good for that, too.

Weed doesn’t just make you feel more hungry, though. THC binds to the receptors in the olfactory bulb found in the brain, which boosts our ability to smell and taste things. That’s part of the reason why eating when you’re high tastes so much better. THC also binds to the nucleus accumbens area of the brain, which triggers a dopamine release. When you eat while high, the brain produces more dopamine than it normally would from eating normally. Lastly, it binds to receptors in the hypothalamus region of the brain, which is where the hormone that makes you hungry is stored. THC triggers the release of ghrelin, which makes you feel physically starved of food even when you’re not.

Basically, THC and a few other cannabinoids and terpenes found in cannabis interacts with a lot of different regions of the brain. They help make food smell and taste better when you’re high, but also make you feel physically hungry. As a bonus, weed triggers a small dopamine release while you eat, making it a more enjoyable task and stimulating the appetite even further.

Cannabis is made up of over 100 different cannabinoids, and each cannabinoid interacts with the body in a different way. If you’ve been feeling stressed out or physically unwell, you might be experiencing a lack of appetite. Some cannabinoids have been shown to increase our appetites, including THC and CBG.

THC is the main psychoactive cannabinoid found in marijuana known for causing the high, and it’s found in most of the strains you’ll find at the dispensary. CBG on the other hand is non-intoxicating. It’s found more commonly alongside hemp strains rich in CBD. However, some cannabis strains produce it in smaller quantities. Regardless, a little goes a long way. If you’re looking for an appetite boost, shoot for strains with THC and CBG. 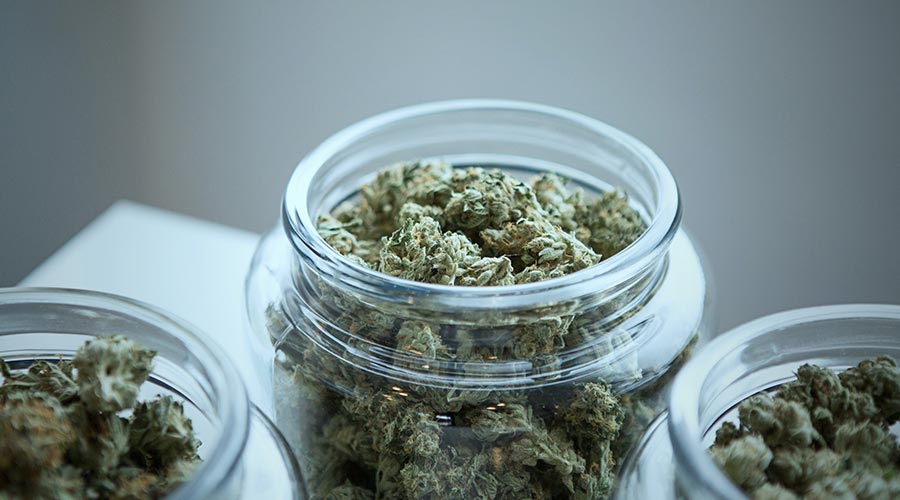 While some cannabinoids are better for stimulating an appetite, some can actually inhibit one. If you’re looking for a chill smoke sesh without the munchies, choose strains rich in THC-v. THC-v is a mildly intoxicating cannabinoid that is known best for causing a clear-headed, energized, and stimulated high. Since it’s similar to THC, it provides many of the same benefits. However, it binds to different endocannabinoid receptors in the brain. Instead of making you feel hungry, it will make you feel not hungry.

Cannabis is also rich in terpenes, which have been shown to make cannabinoids more effective in the entourage effect phenomenon. Like cannabinoids, terpenes are also mildly psychoactive and are responsible for the way certain strains feel. For example, Limonene terpenes alter moods and may make you feel more energized. They’re found most often in sativa-dominant strains. On the other hand, strains full of b-caryophyllene terpenes are more relaxing in nature and found in indica-dominant strains.

Terpenes themselves are responsible for the way each individual strain smells, tastes, and affects you. While the cannabinoids cause you to feel high, the terpenes amplify the effects and alter the way the high feels. When you’re looking for specific effects from cannabis, it helps to look at its terpenes in addition to its cannabinoids.

When it comes to increasing your appetite, you’ll want to choose a strain that amplifies the effects of THC. Myrcene, b-Caryophyllene, Limonene, and Pinene are the most common terpenes found in cannabis that have shown the entourage effect with THC strongly. If a strain has one of these as their dominant terpene, there’s a good chance that it’ll make you hungry when consumed in addition to THC.

Just like cannabinoids, some terpenes are better for inhibiting an appetite than stimulating it. Strains high in humulene work best in the entourage effect with THC-v, which helps prevent the munchies.  With that in mind, Humulene-dominant strains might be best for avoiding a case of the munchies.

5 best strains for stimulating your appetite

If you want to pick a strain that will help boost your appetite, you’re in the right place. Each strain on this list is THC/CBG dominant, and contains either Myrcene, b-Caryophyllene, Limonene, or Pinene. Best of all, they’re common enough that you should be able to find them at your favorite dispensary. All you need is a few puffs and you’ll be pilfering your cabinets in no time.

Purple Kush is an indica-dominant hybrid that checks in at 20% THC. It’s rich in Myrcene, Pinene, and b-Caryophyllene terpenes that give it a sweet and earthy flavor alongside pleasant, mellow euphoria. It’s effects are more physical, making way for whole body relaxation and relief from pain, insomnia, and stress. However, it’s also one of the best strains for a lack of appetite.

Amnesia Haze is one of the most popular strains in the world thanks to its potent energizing effects and creativity-boosting mental clarity. It features a whopping 20% THC and almost 1% CBG. It also contains terpenes like Myrcene, Limonene, and b-Caryophyllene that give it a lemony, citrus-forward flavor. Its uplifting effects are great for stress and depression, though it’s also wonderful for headaches and getting your appetite back.

Lemon Kush is a great hybrid that offers plenty of energizing and uplifting sativa-dominant effects. It also contains 20% THC and up to 1% CBD, so it’s sure to help you get your appetite back. If the cannabinoids alone weren’t enough, it’s also chock full of hunger-inducing Pinene, Myrcene, and b-Caryophyllene which give it a tart citrus and sweet earthy flavor. Lemon Kush is great for its giggly mental lift and potent against stress, lack of appetite, difficulty concentrating, and pain.

Lavender is a mellow indica-dominant hybrid that features about 18% THC and up to 1% CBG. It’s a very relaxing smoke that will melt your body down and allow it to unwind and relax, though it also provides a great mental lift that’s perfect against stress and depression. Featuring terpenes like Myrcene, Pinene, and b-Caryophyllene, it offers a floral, lavender aroma and a dank, earthy flavor. Between its cannabinoids and terpenes, you can count on it for helping you get your appetite ready for dinner.

Girl Scout Cookies is a pretty balanced hybrid that checks in at 19% THC and 1% CBG. It’s an excellent appetite stimulator thanks to these cannabinoids alongside terpenes like b-Caryophyllene, Myrcene, and Limonene. Girl Scout Cookies is a great smoke for its euphoric, mentally lifting effects and physical relaxation that seems to have a strong effect against nausea. It’s bakesale-esque flavor and aroma make it the perfect pre-dinner snack, no matter how you’re feeling.