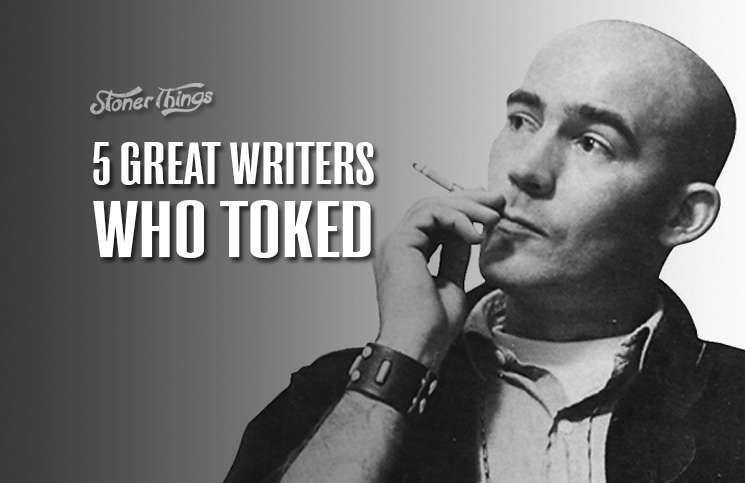 There is no end to the list of authors who toked while writing. It’s an open question whether the THC made them better at their art, but it usually didn’t seem to hurt.

Here, then, is a list of five great writers who smoked weed. Cozy up with your favorite plant – and then enjoy the brilliant words these writers created.

There is still debate about whether the Bard of Avon smoked marijuana. But it’s more likely than not that he did.

A number of years ago, archaeologists found several broken pipes in a garden near Shakespeare’s home in Stratford Upon Avon. The pipes, dated to the time of his life, contained remnants of marijuana and coca leaves – the source of modern-day cocaine.

It’s possible, as some skeptics suggest, that the pipes belonged to someone else. But it’s doubtful any other residents of Stratford had the international connections needed to secure cannabis in the 17th century.

And that’s to say nothing of the man’s writing. No matter which drugs Shakespeare did, they didn’t slow him down.

The guru of gonzo turned journalism on its head in the 1960s. Employed by Rolling Stone, Thompson famously followed the Nixon campaign across the country in 1972. He later wrote Fear and Loathing in Las Vegas, a hallucinogenic romp through America’s failed drug war.

There’s no telling what drugs Thompson tried. He claimed to have used almost every intoxicating drug known to man. But there’s no doubt he used marijuana and enjoyed it.

Non-fiction prose has never been the same since Thompson lived and died. And most of it wouldn’t have been possible without drugs – including marijuana.

King gave up drugs long ago, but he’s been a vocal supporter of legalization throughout his career. It was other drugs that did him in, including a cocaine and alcohol binge so severe he says he doesn’t remember writing Cujo.

With or without drugs, King is one of the most gifted and prolific writers in the English language. Almost everything he writes becomes an instant best-seller, and he has long since won over critics who once considered him too popular to qualify as a serious author.

The 60s produced many artists of all stripes who used cannabis. Kerouac first tried the drug upon his graduation from high school, but he reportedly preferred booze to pot until his death from alcoholism at 47.

In just a few years, he produced some of the best prose of the ’60s, most memorably On the Road. It’s debatable whether he could have done better without the liquor, but he certainly would have lived to write more.

The marijuana might have saved him, if he had been able to use it as his only drug, but he was never able to cut himself off from the booze. Even so, the mark he left on American literature is profound.

Kesey was easily one of the most drugged-out writer in the annals of great writers. Only Thompson surpassed him, possibly. Kesey toured the Pacific Coast in a tricked-out bus filled with his fellow “Merry Pranksters,” who dropped acid and smoked weed.

Kesey was closely linked with the Grateful Dead. He wrote One Flew Over the Cuckoo’s Nest, his most beloved work and a testament to the anti-conformist spirit of the ’60s.

He died in 1997, just a year after California voters adopted medical marijuana. But he didn’t live nearly long enough to see legalization and the beginning of the end of the drug war. He definitely helped make it happen, though.

There you have it: our list of the best writers who smoked weed. Who else are we missing from this list? Let us know in the comments.