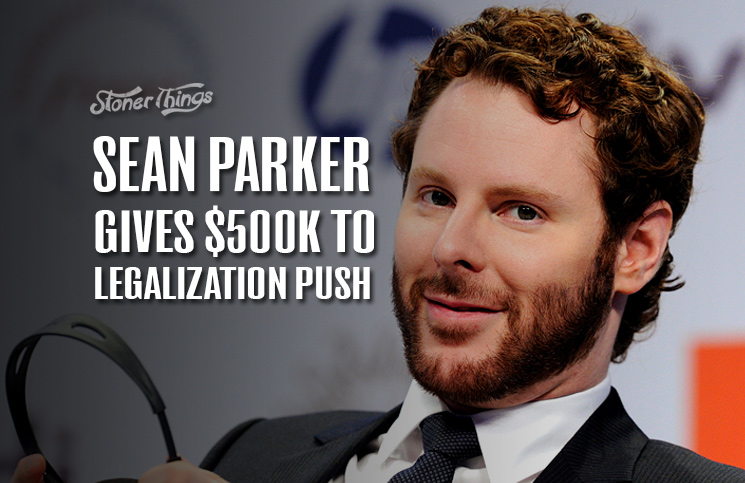 A proposal to legalize marijuana statewide in California got a major shot of cash in January, just hours after officials cleared the effort to begin gathering voter signatures. Tech billionaire Sean Parker, best known as the founder of Napster and an early president of Facebook, infused the legalization push with $500,000 late last year, according to campaign finance documents filed in Sacramento Jan. 7. The day before, elections officials informed Parker’s group they could begin collecting signatures from California voters. Volunteers will now have to gather nearly 366,000 valid signatures before the item can appear on the November ballot.

“I’ve been following this issue with great interest for some time,” Parker said last year when he became the campaign’s biggest individual backer. “It’s very encouraging to see a vibrant community of activists, many of whom have dedicated their lives to this issue, coming together around a sensible reform-based measure that protects children, gives law enforcement additional resources, and establishes a strong regulatory framework for responsible adult use of marijuana – one that will yield economic benefits for all Californians.”

Cannabis is already legal in the Golden State as medicine, and it is notoriously easy for almost anyone to get, but activists have been pushing for years to legalize the drug for personal use, without success. Two previous efforts, in 2010 and 2014, failed. The first died when voters failed to support it at the polls, while the second push never even made the ballot due to infighting among supporters.

Prospects are considerably brighter this time around, however. Unlike in 2010, most California voters now support full legalization. And unlike in 2014, advocates are actually trying to work together in 2016. The biggest development on that front came late in 2015, when the other big group pushing for legal marijuana threw its weight and money behind Parker’s group instead. That leaves the latter group as the only serious contender for the ballot; there are several other petitions, but they are all considered long-shots filed by amateur activists with no access to serious funding. Successful campaigns to change California law by referendum almost always cost several million dollars each. Parker’s proposal would make it legal for adults 21 and older to buy, possess, and use up to an ounce of cannabis. The state would create and regulate a retail marijuana industry and would impose a 15 percent sales tax plus cultivation taxes. Analysts have reported the plan would generate more than $1 billion in local and state tax revenues alone. California is the nation’s most populous state, and the impact of its addition to the legal cannabis market in America can’t be underestimated.

Parker’s group is known as the Committee to Control, Regulate and Tax Adult Use of Marijuana While Protecting Children. Activists there have brought in more than $1 million in early contributions, including money from large national lobbying groups such as New Approach PAC and the Drug Policy Alliance. Those large donations signal the big money is moving toward Parker and his plan. That alone should help winnow the pool of small-time activists who are willing to continue pushing their long-shot proposals.