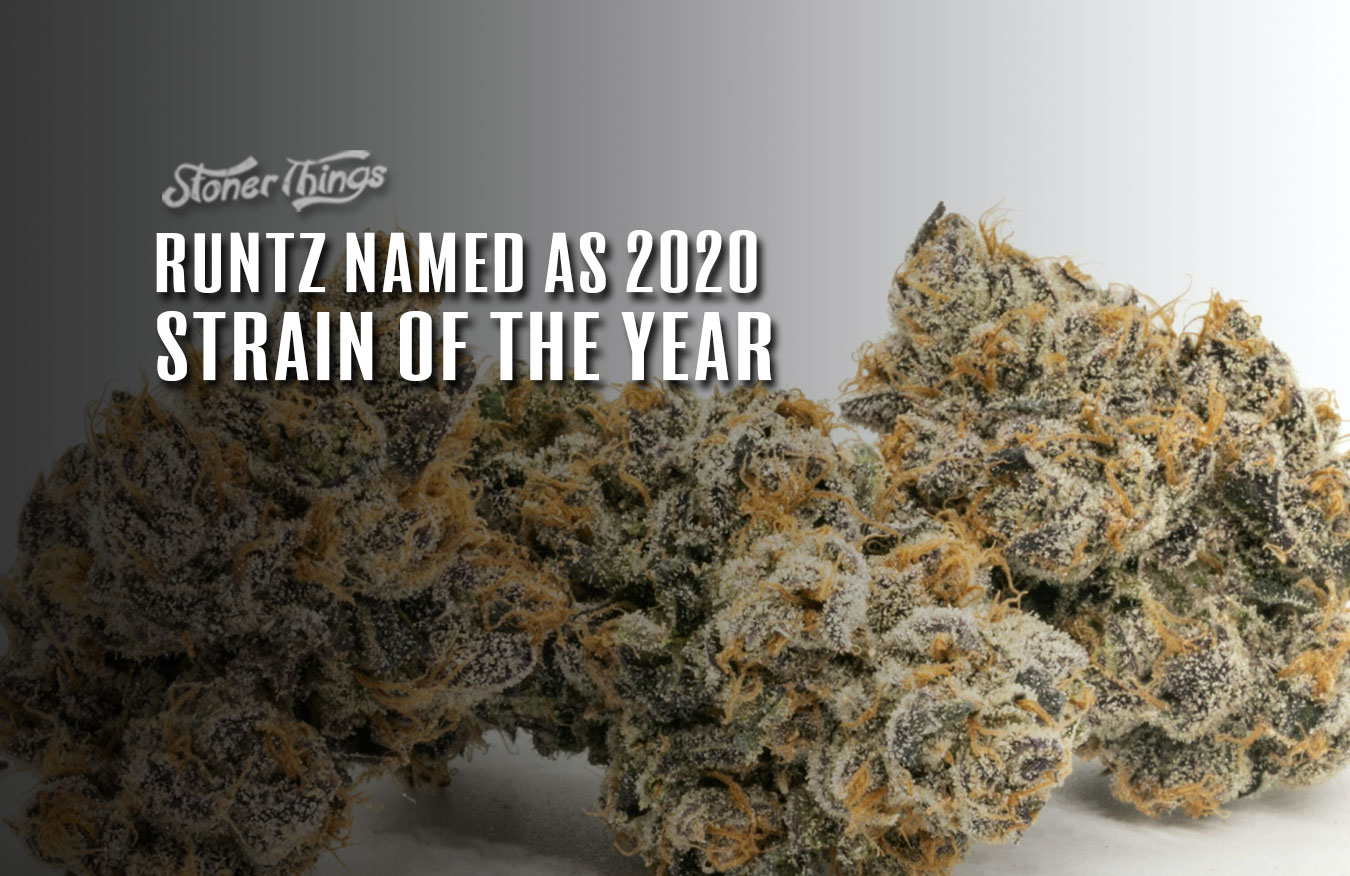 Earlier this month, Leafly announced the 2020 strain of the year. After tallying the votes, America picked Runtz as their favorite strain this year. Here’s everything you need to know about the Runtz weed strain.

What is the Runtz Strain?

The Runtz cannabis strain is a potent hybrid cross between the award-winning Gelato and the award-winning Zkittles strains checking in at a whopping 26-30% THC on average. It boasts a beautiful appearance, plenty of trichomes, and some seriously mouth-watering candy-like terps. It was originally bred by Berner over at Cookies, and has since made its way into just about every dispensary all over the country.

People are loving this potent hybrid for its brain-melting effects and potent body buzz that makes any experience enjoyable and makes it possible to go about your day completely pain, stress, and depression free. Best of all, Runtz weed offers a host of delicious candy terps that are sure to delight even the finnickiest of palates. All in all, Runtz weed is highly in demand for its balanced effects, high potency, fruity terpene profile, and eye-catching appearance.

While the Runtz marijuana strain on its own is a delectable delight, Runtz is actually considered a phenotype of the cross. As a phenotype, there are other phenotypes floating around like it, including White Runtz and Pink Runtz, which are as equally exceptional as Leafly’s strain of the year. The Runtz family of strains are a cross between Zkittles and Gelato and are phenotypes of phenotypes from the Girl Scout Cookies family all double-crossed with each other.

Outside of the original phenotype, it’s quite difficult to propagate the Runtz weed strain on your own. She’s an exotic, inbred, and finicky strain, so she’s rated difficult to grow. Luckily, there are a lot of dried Runtz flowers making their way around the country thanks to Berner and the expansion of the Cookies line all over the country after support from so many Americans and over 100 shoutouts from rappers.

White Runtz is another phenotype of the Gelato x Zkittles cross. While it varies genetically from original Runtz very little, its appearance and potency are quite different. White Runtz is named White Runtz for its candy-like flavor and massive amounts of silvery-white trichomes that cover the flowers entirely. These resinous trichomes show a decent uptick in potency, and of the three, this phenotype is the most powerful. Pick White Runtz if you want higher potency.

On the other hand, we have Pink Runtz. While she’s still not 100% verified genetically, it’s most likely another Gelato x Zkittles phenotype. The “pink” in the name comes from the exotic flavors the strain offers that are more reminiscent of the Runtz candy than the other two phenotypes. Pink Runtz also reportedly tends to be more aromatic than the other two. Pink Runtz is the better choice if you prefer a flavor-forward strain.

The regular Runtz cannabis strain sits somewhere between the two, offering the best mix of effects you can find out of the Runtz marijuana strain.

Have you tried the Runtz family of strains after original Runtz became Leafly’s strain of the year? What did you think?