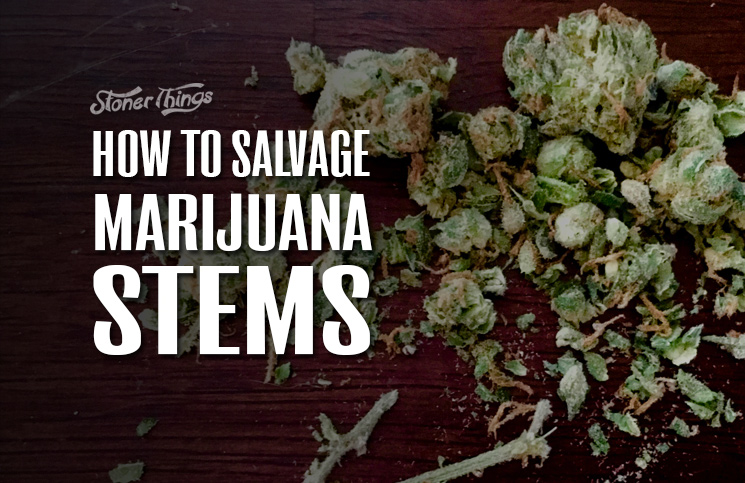 Stems are no one’s favorite part of the cannabis plant. They’re rarely good for much and they’re a pain to pick out of your stash.

So what is the point of smoking weed stems? Can they get you high enough to be worth the bother? And are they bad for you?

Can you smoke weed stems?

So can you smoke weed stems? The most important thing to note about marijuana stems is that they’re just another part of the pot plant. It is not especially dangerous to smoke any part of the plant, whether leaves, bud, or stems. Smoking the stalk would be an unappealing waste of time, and seeds would do you no good, but otherwise it’s all fair game.

Still, you’re putting smoke in your lungs, and even with marijuana, that’s not exactly good for your health. It may not hurt you much in the long run, but filling your lungs with smoke isn’t a great idea unless you’re getting some kind of payoff.

In other words, you probably wouldn’t want to try to smoke a bowl or joint or blunt packed full of stems.

Do weed stems get your high?

But using stems isn’t a pointless effort. There is some THC in there, and if you consume enough THC, you will, by definition, get high. The problem is that there isn’t much THC in cannabis stems – nowhere near enough to get you as baked as traditional bud.

Many stoners insist stem smoke gives them headaches, but there’s no real evidence to back that up. Aside from the concentrations of certain cannabinoids – namely THC and CBD – stems are little different from other parts of the pot plant.

That said, it’s usually best to toss the stuff. First off, you shouldn’t be paying for stems in the first place. If your local pot shop or black market dealer can’t take the time to pick your weed clean before weighing it, they’re ripping you off. And stems are often a sign of low-grade cannabis.

What to do with weed stems

Should you choose to consume weed stems, there are at least a couple possible methods. One is to grind the stems into your regular pot and smoke it all. Another is to cook ground stem into an edible preparation such as cannabutter. Here’s a recipe for one such concoction, stem tea.

How to make stem tea

Tea made strictly with marijuana stems probably won’t get you very high, but it does give you a pleasant excuse to get rid of all that crappy byproduct. Like any tea, the effects should be soothing and relaxing, if you feel anything at all.

The steps for making stem tea are the same as those used to brew standard cannabis tea. First, grind the stems into small pieces (but not powder). Place the pieces into a small pot, submerge the weed in water, add a dollop of butter, and bring it all to a boil.

Let the mixture simmer for 10 to 15 minutes. Then strain the water through a cheesecloth or double layer of coffee filter, making sure to squeeze out and save all the liquid. Finally, use it to brew your favorite tea.

This won’t leave you especially stoned, but at least you’ll know you didn’t let anything go to waste. You’ll also learn whether marijuana stems work for you, and the worst-case scenario is a light pain behind your eyes.

Let us know: Have you ever smoked cannabis stems? How did it go? Leave a comment.