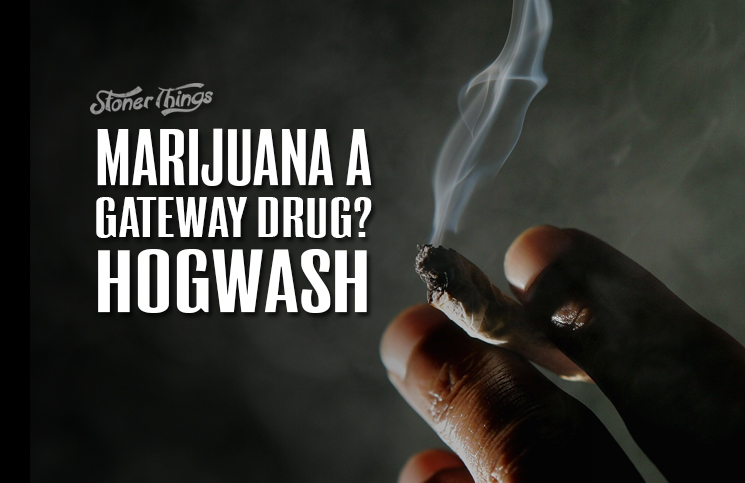 When you smoke marijuana, the theory goes, you automatically become more likely to try other drugs: cocaine, heroin, meth… There’s no credible explanation of how this “gateway” process is supposed to work on the level of brain cells, but it does make a certain amount of raw common sense.

But there are two problems with that. First, common sense has a wild tendency to be wrong. We didn’t build cars or airplanes or spaceships on common sense; we built them on science. Second, the gateway assumption simply isn’t true.

What is true is that many people use marijuana. A much smaller number use harder drugs. And a much larger number use alcohol. We also know there is a correlation between marijuana use and the use of harder drugs: People who use weed are more likely to use the hard stuff.

This correlation isn’t terribly strong, and we don’t know what causes it – and that’s the root of the misunderstanding. The obvious, “common sense” theory is that pot leads to other drugs. But again, common sense is rarely right. In fact, scientists believe it’s far more likely there’s another explanation.

It’s highly plausible, for example, that people who use hard drugs use them because they’re genetically predisposed to do so. In other words, it’s the genes that make the user act, not the drugs, even if these people also typically smoke pot. It’s also plausible to believe that a mental health condition, such as depression, leads people to use multiple drugs, meaning again, it’s not the drugs but rather the illness.

What’s more, the gateway argument doesn’t hold logical water. If marijuana is a gateway to cocaine, then surely booze is a gateway to marijuana – and cigarettes to booze and even milk to cigarettes. Something comes before everything. That fact doesn’t tell us what causes anything.

The simple fact that so many pot smokers don’t use coke or meth or smack – and the vast majority do not – should be enough to stop the gateway theorists. The same is true of other substances: Most alcohol consumers rarely or never use cannabis, just like most coffee drinkers don’t use speed.

But this theory is hard to kill. It’s been drilled into our heads that use of one leads to use of the other, even though we have never had the scientific evidence to back that claim.

Still, any pothead could tell you the idea is wrong. Marijuana users don’t experience an urge to try other drugs, unless that urge was there already. And if there are so many pot smokers and pot use leads to PCP and PCP leads to God only knows what, shouldn’t the streets be full of rampaging monsters on angel dust?

They’re not, of course, just like we stoners aren’t building opium dens or crack houses next to our legal pot shops. The fact is that for most people, weed is a gateway to only one thing: a good time. Now that makes sense.