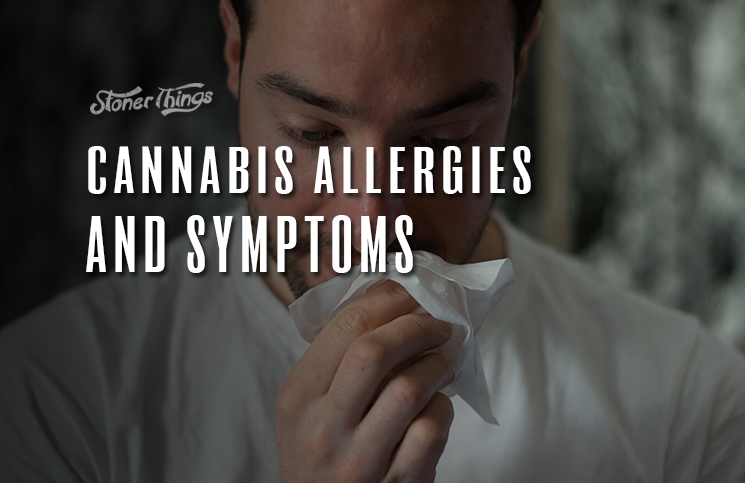 Allergies are just one of those facts of life for millions of people. Nobody wants allergies, of course, which is why there’s a ton of medicine to reduce or even eliminate allergies. While pollen is definitely a problem for some, male plants (which produce pollen in cannabis plants) are not typically ingested. The female plants are generally isolated so buds can form without seeds, which also increases THC content. So cannabis allergies and their symptoms are a little more complicated than your run-of-the-mill tree pollen or mold allergy.

Since cannabis is ingested in many different ways, allergic reactions may or may not happen depending on the combination of cannabinoids involved. Unfortunately, it appears THC itself may be an allergen. One of the reasons there are more reported cases of allergic reactions to various cannabis preparations? Simple numbers. More people are enjoying it in many more different ways than ever before, which is leading to more discoveries about how it interacts with our bodies.

Some researchers rounded up what we know about cannabis allergies, and did find that there are reactions not dissimilar to pollen-type allergies. In particular, smoke is made of tiny particles just like pollen and has a similar response in the body, causing runny nose, coughing and sneezing (among other symptoms). These symptoms may also appear if exposed to the pollen. Cases of allergic asthma have been reported, but seem to be more prevalent with pollen exposure. However, it’s also important to note that some of these symptoms could be caused by mold on cannabis. Mold isn’t inherent to cannabis, but it can grow if stored for too long or in a damp environment, etc. Still, some may have reactions to both THC and mold. Any gardener will tell you what a pest mold can be on plants!

Cannabis isn’t just ingested, it’s put on the skin as well. Long before decriminalization began in the U.S., hemp lotions were available. Hemp seed products abound, including items you can eat. Depending on the severity of the allergy, those sensitive to cannabis have reported everything from hives to trouble breathing or speaking. Unfortunately, cannabis allergies aren’t usually detected until someone has a reaction.

This is why if you’re concerned about this allergy, it’s best to get to an allergist. The common method for detecting allergies these days is doing a skin prick test, which will cause a small welt on the skin when an extract of the potential offender is deftly placed in the upper layers of the skin. It’s not an invasive procedure, but a lack of standardization can yield varying results. Still, a trained professional is your best bet for narrowing down what’s causing a reaction.

So what can you do if you have an allergy to cannabis? One allergist in Colorado documented his experiences, but they mostly boil down to the same prescription for hay fever and similar sufferers. If possible, avoid exposure (especially high concentrations of THC), or take medicines that you’d take for allergies. Nasal sprays, decongestants, antihistamines and the like can be used. Interestingly, in Dr. Silvers’ report he noted that one patient had a severe reaction when he smoked wax. At first, it was thought the high THC content was the culprit, but it was determined to be more likely a contaminant in the wax itself.

As with most medical issues, this is a complex topic that’s still being researched. What we know is cannabis allergy and symptoms are pretty similar to other allergies in their range of severity and cure. Since there’s no easy fix, individuals will have to talk to their doctor about what is best for their needs. Even so, the allergy appears to be rare among cannabis consumers overall.