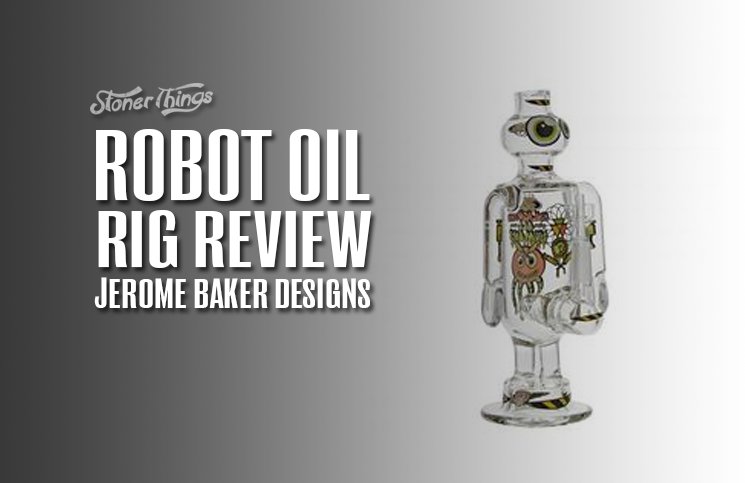 Jerome Baker Designs is a glass company that has been around since the 90s. It was started by two creative men, Jason Harris and Saeed Mothadi, as a way to help draw attention to the glass art industry. Commonly known as JBD, Jerome Baker Designs has become famous in the world of glass art, and are especially known for their creative and unique bongs — particularly, their limited edition JBD robot oil rigs.

Jerome Baker Designs has come out with a limited edition series that features four unique JBD robot oil rigs, so-called because they only use ‘hash oil’ or ‘honey oil,’ paste-like wax or ‘budder,’ or shatter. Using concentrates like these allows for much more control over how much is inhaled with each hit. Each of the four models has been designed with incredible intricate detail.

There are 4 uniquely designed rigs to choose from.

The first in the limited edition series is known as Robots Love Dabs. It has a honeycomb perc on the bottom and the oil drip themed labels that are strategically placed around the rig are both emotional and industrial. The direct inject joint on this BakerBot is also different from the others because it is strategically placed for optimal function of the perc.

The second bot in the series is known as Mind Control, and the concept of the theme behind the artwork is abstract. The labels and artwork include eyes, a light bulb on the robot’s head, and labels that indicate battery and oil level. Unlike the first bot, the Mind Control robot features an inline perc.

The third BakerBot is known as Oil Crisis, and it features the most complex design out of the four because it features both an inline perc and a recycling function. The labels and artwork do well to convey the sense of a real oil crisis by having its OIL meter label near zero. Also, near the base of the rig, the label makes it look like oil is spilling all over the place.

The last in the Jerome Baker Robot Oil Rig series is known as Enlighten All Humans, and has an inline perc that sits in the belly of the bot. It also features enlightening labels and big wide eyes.

Each rig is only 9 inches tall, making them the shortest among all home-use rigs. Additionally, the 10mm joint helps to concentrate the toke.

Each complete kit costs about $259.66, and they’re all assembled in the United States with only the highest quality glass — German Schott borosilicate glass.

Check out the Baker Bots being showcased below.