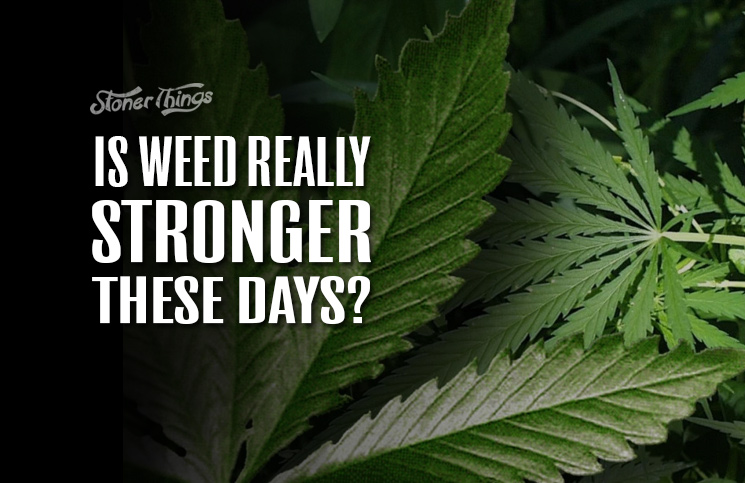 It’s one of the most popular claims about marijuana, and it’s used almost exclusively to scare people from trying it. Cannabis, the story goes, is far stronger these days than it used to be – dangerously strong.

But is there any truth to this accusation? Well, yes – and no. Either way, it doesn’t matter nearly as much as cannabis opponents would like to think.

Why do we believe marijuana potency has risen dramatically since the 1970s? As it turns out, there have been a few studies on the matter, with varying degrees of credibility but at least some enlightening findings. Just last year, Andy LaFrate, president and director of Charas Scientific, a Colorado lab that tests cannabis potency, revealed some interested findings about THC levels.

THC is the chemical that gets marijuana users high, and LaFrate said its concentration in cannabis samples has tripled since the 1980s. THC levels were well under 10 percent in that era, he said, while today’s weed contains 20 percent THC on average – sometimes as much as 30 percent.

Supported by other studies

Charas Scientific isn’t alone in its findings. An earlier study found THC concentrations jumped from an average of 5 percent in 1990 to 10 percent in 2005. Researchers have tested levels as high as 40 percent in hash oil and other concentrates, though those products are typically consumed in much smaller amounts than traditional bud.

The 2005 study examined the effects of different THC levels on 20 recreational users and concluded indoor hydroponic growing accounts for most of the increase. But the same spike has not been seen in levels of CBD, a chemical in the marijuana plant that is widely used to treat seizure disorders. CBD doesn’t get users high, making it a popular form of medical marijuana in conservative states.

CBD levels have remained the same

This would suggest cannabis smokers are getting higher without any corresponding increase in medical benefits. But many researchers adamantly reject this claim, saying most of the data supporting a spike in THC levels simply isn’t credible.

A 2008 review published in the journal Addiction found THC levels vary widely around the world, from one sample to another, and even between batches. This makes it nearly impossible to accurately track the average potency of modern-day marijuana, researchers say.

What’s more, the 2008 review found much lower average THC levels than earlier studies. In fact, the review concluded average THC levels in samples of confiscated pot rose from just 2 percent in 1980 to only 8.5 percent in 2006. But no matter what the numbers, the authors said, it isn’t believable that THC levels increased 20 or 30 times over in the span of a few decades.

Other problems with past research include the age of marijuana samples. THC can degrade over time, as can CBD, creating a problem not only in testing present-day weed but in comparing it to samples from the 1970s, as there is no way to know how long the older bud was stored. If anything, tests on modern cannabis may return more potent results simply because today’s samples can be obtained and tested more quickly, giving scientists access to fresher marijuana.

“In National Institute on Drug Abuse studies over the past several decades, the age of samples has varied from a few weeks old to a few years old — and researchers made no attempt to compensate for the loss of THC during prolonged storage,” Adrienne LaFrance wrote in The Atlantic. Past studies have also typically examined marijuana from a limited number of places, LaFrance wrote.

More importantly, at least one study demonstrates the obvious: When cannabis is especially strong, stoners smoke less of it. When it’s weaker, they use more. So even if today’s marijuana really is stronger than your grandmother’s, it probably won’t make much of a difference.

Let us know: Do you smoke less weed when it’s especially strong? Do you intentionally look for the strongest bud you can find, or do you like something a little bit more mellow? Leave a comment below.