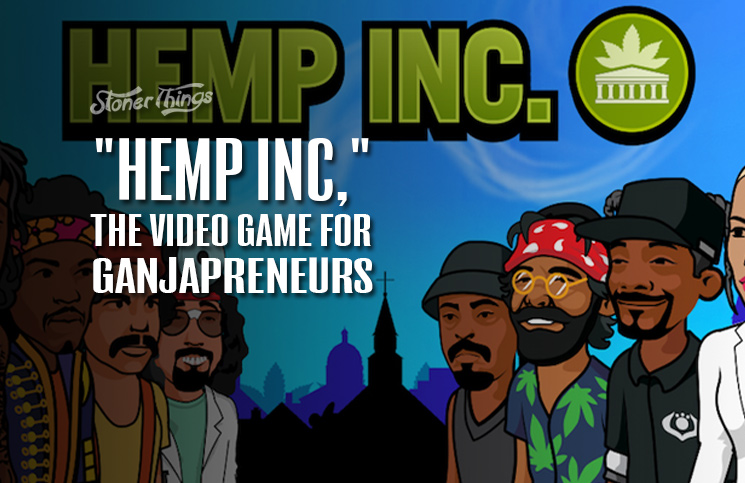 If you’ve ever tried and failed to grow marijuana, sell it, or build a legal retail franchise to sell it for you, you may want to check out Hemp Inc, a new video game that immerses players in the cannabis industry and introduces them to some of its players, including celebrities such as Snoop Dogg, Willie Nelson, and Cheech Marin.

You may have heard of Hemp Inc, but probably not. It should be much more popular than it is, though that may be a good thing for you. If nothing else, playing this game before it takes off will give you a slight edge over everyone else in launching a multi-national cannabis empire.

Hemp Inc is a mobile app from HKA Digital Studios, a video game company run by former Call of Duty and Tony Hawk developer Danny Hammett. As Vice News noted in July, the game is similar to FarmVille, with a few exceptions: You can interact with Facebook, you can make your own avatar, and you can grow weed – but only weed.

Offered as a freemium app (it’s free but includes in-app purchases), Hemp Inc lets players grow and sell up to 20 different strains, buy stores and other property, and build a local marijuana franchise. Celebrities show up frequently, including Snoop, Khalifa, Willie, Cheech, and Tommy Chong. And there are notable references to NORML, High Times Magazine, and other aspects of weed culture.

The potential for the game is huge. Millions of aspiring ganjapreneurs – not to mention stoners who simply want to grow their own supply at home – have little access to credible information on how to get started. Even cultivating a single cannabis plant can take several tries for inexperienced gardeners.

Over a million downloads

So it’s somewhat surprising Hemp Inc hasn’t exploded yet. It’s been downloaded more than a million times, but marketing has been minimal. Hammett says that’s because he and his colleagues wanted to coordinate marketing efforts with the schedules of the featured stoner celebrities.

Larry Linietsky, COO at High Times, says product placement was a “natural fit” for the publication. The High Times logo appears as soon as the app starts, several characters hold the magazine throughout, and the company has a local office in the game’s fictional town.

“Many of the people who come to our events, read the magazine, [or] go to the website are gamers,” Linietsky says. “They expect, of course, that if there’s going to be a game that is in this space, that those same brands would be in it.”

The arrangement with celebrities also makes sense, Hammett says. It cost a lot to hire them, but they will also promote the app so it reaches a wider audience. At the same time, the celebs will have access to a younger demographic that spends more of its time staring at iPhones than watching TV or listening to satellite radio.

There will probably be some push-back once Hemp Inc’s audience starts to grow, with opponents accusing the game of glamorizing cannabis use. But Brian Kelly says it’s too late for that to matter much.

“There’s a movement in this country toward the legalization of marijuana,” says Kelly, vice president of First Harvest Financial, an equity firm that specializes in legal pot. “People who haven’t played the game will think we’re glamorizing it. But I think we’re kind of past that point. Most people out there believe that cannabis shouldn’t be illegal. That mood, that tone, has shifted.”

Let us know: Would you play Hemp Inc? Do you think it could help you start a legal weed business? Leave a comment below.