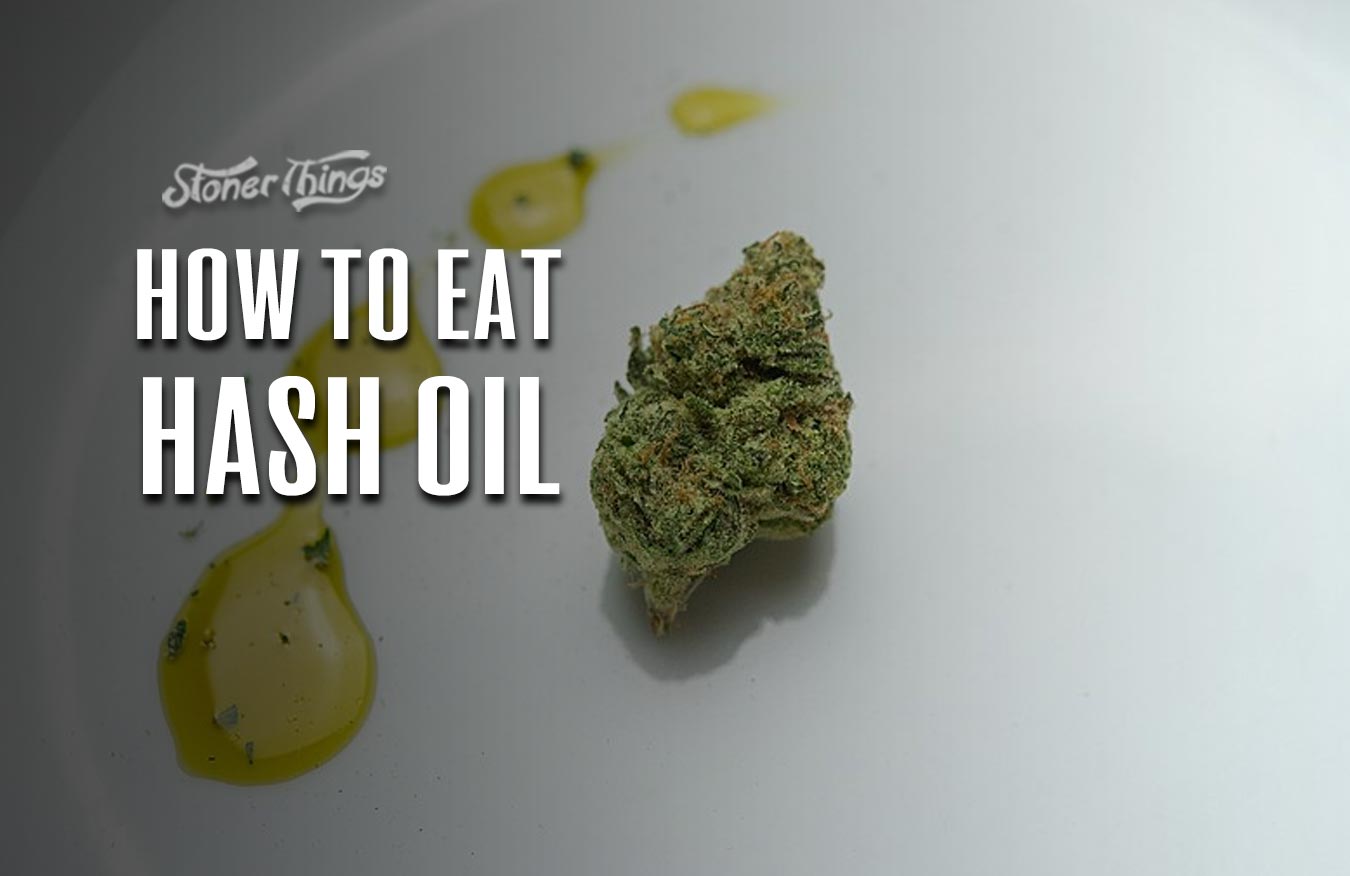 Are you the kind of person who gets right to the point? Do you love to mix pot and food? Could you stand to be higher? If so, here’s a way to eat hash oil that packs a wallop. The high is long, strong and unparalleled, and if you can stomach a spoonful of butter, it goes down smooth.

Hash oil is basically just concentrated marijuana. You can buy it at a dispensary or make it with high-quality bud.

Can you eat hash oil?

If you’ve got some leftover hash oil but no way to smoke it, you may be wondering whether you can eat it. Fortunately, you’re in luck. You can use your extracts to make cannabutter as you would with flower. However, in this guide, we’re going into detail on a much faster method.

How to eat hash oil

We’re going to assume you’ve already purchased or made your concentrates. Read below for instructions on how to make your own.

1. Melt the butter in a large spoon

Get a deep spoon – a measuring spoon is ideal – and fill it with butter, preferably soft. Stick the spoon in the microwave for about 10-15 seconds so it’s melted.

2. Infuse your concentrate with the butter

Now get a dab of oil out of the vial and drop it into the melted butter. Hold the spoon over an open flame – a lighter, candle or stovetop – and stir the oil into the butter. Let it continue to melt over the flame for about 30 seconds. Don’t overdo it.

Eat the butter directly or add it with a snack.

Melted hash oil butter is cheap, it’s easy, and no, no one will ever mistake it for cuisine. But if you happen to have some oil and you’re chronically lazy (aren’t we all?), this is a fast, foolproof way to eat high-potency pot.

If you’re health conscious, olive oil works in place of butter. But avoid margarine or other low-fat butter substitutes. THC is soluble in fat, and the more there is, the better it works.

Give yourself some time with this stuff; it’s a lot stronger than ordinary edible weed. You definitely shouldn’t use a car for a while. Most important, keep a list of 24-hour delivery joints handy. The high you’ll get from eating hash oil lasts a long time, it makes you crazy hungry, and it leaves you cemented to your couch.

How to make hash oil

There are several ways to make hash oil, but the most popular is butane hash oil extraction (BHO). This process uses compressed butane, which is highly explosive, so you probably shouldn’t do it yourself. If you do, make sure you take it outdoors, in open air away from buildings and cars.

The idea is the same either way: alcohol or butane is used as a solvent to strip THC resin from raw marijuana. Once you have the resin, you boil off the solvent using either a double boiler or a hot water bath.

To make iso, start by putting at least a quarter of finely ground pot in a Mason jar. Pour enough isopropyl alcohol into the jar so the weed is completely submerged. Close the lid and shake for about a minute.

Now strain the mixture through a coffee filter or cheesecloth into a second jar. Repeat the process once or twice, and then pour all the strained liquid into the bottom of a Pyrex dish or the top pan in a double boiler.

If you have an electric range, you can use the double boiler or simply balance the Pyrex container on top of a boiling pot of water. If you have a gas stove, use a hot water bath instead. Isopropyl alcohol is highly flammable, and you don’t want to get it near an open flame.

What remains should be a layer of thin brown goo on the bottom of the Pyrex container. Remove this with a razor blade and place the goop in a small vial. It may help to wear latex gloves, as hash oil is very sticky.

Now you have your hash oil. Let it dry before you try to cook with it. You can put it in the freezer for a couple minutes until it’s hard enough to work with.