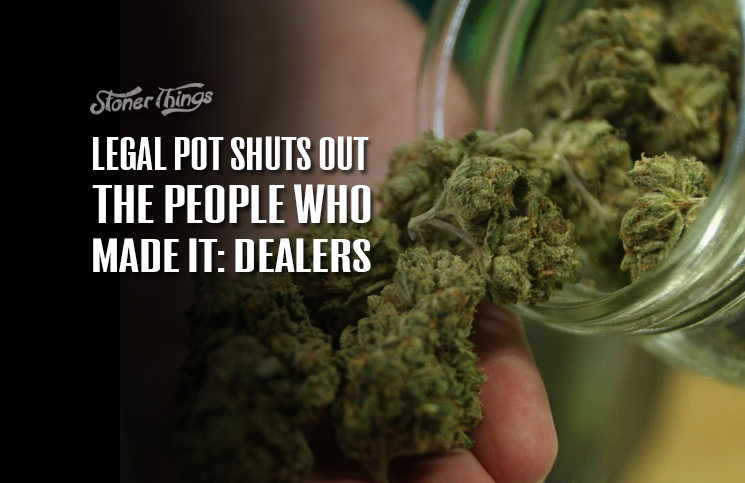 If one group did more than any other to create the legal marijuana industry, it was without a doubt the people behind the black market that came before it: ordinary, everyday drug dealers. But now, many of these people say, they’re being shut out of a business that wouldn’t exist without them.

In an interview with The Guardian newspaper, 33-year-old San Francisco native Joshua Weitz said he went from dealing weed at 14 to planning his own legal delivery shop in his early 20s. He applied for a California license under the name Mirage Medicinal.

“You get this sense of a real supreme accomplishment,” Weitz said. “It felt so good to build something.”

He might have made it happen, too, but he was pulled over in 2014 during a road trip through Texas and convicted of felony cannabis possession. Just before Mirage Medicinal was set to open its doors, Weitz was slapped with a criminal record that prevents him from owning a marijuana business in California.

His sister, Nina Parks, ran Mirage while he served time in prison, and he still consults for her on the business. But it’s unclear whether he’ll ever be allowed to run the company, which he created to serve a legal market.

And Weitz isn’t alone. Marijuana reform advocates are increasingly pointing to the fact that the industry and the lawmakers who regulate it routinely exclude former drug dealers and illicit pot farmers – the very people who built the industry and are best-suited to run it. Victims of the drug war themselves, they are barred from taking advantage of the reforms inspired by the injustices they endured.

“The irony for me is that we’re going to keep out everybody who has been convicted of transporting or selling narcotics from the business of transporting and selling narcotics, which is essentially what you call colonialism,” Weitz said. “We’re going to land on your land, use all of your resources, and you can’t be involved in profiting from it. It’s totally insane.”

This state of affairs is true in every state where cannabis is legal for recreational use, but there is a growing movement to lift barriers that prevent ex-dealers from working in the legal marijuana trade. Some advocates are pushing further, actively encouraging former dealers to open pot shops.

The result of laws that bar people like Weitz from growing or selling cannabis is that small-scale mom and pop operators are shut out while wealthy businesses – usually owned and operated by white men – dominate the market and vacuum up profits. It is people of color, already targeted by the drug war, who bear the brunt of the consequences.

This could change if activists can successfully reform laws that strip convicted felons of their civil rights, including the right to work in the legal marijuana market. A national campaign to do that is already underway, but it will likely be a long time before entrepreneurs like Weitz can claim a rightful share of the industry they built.