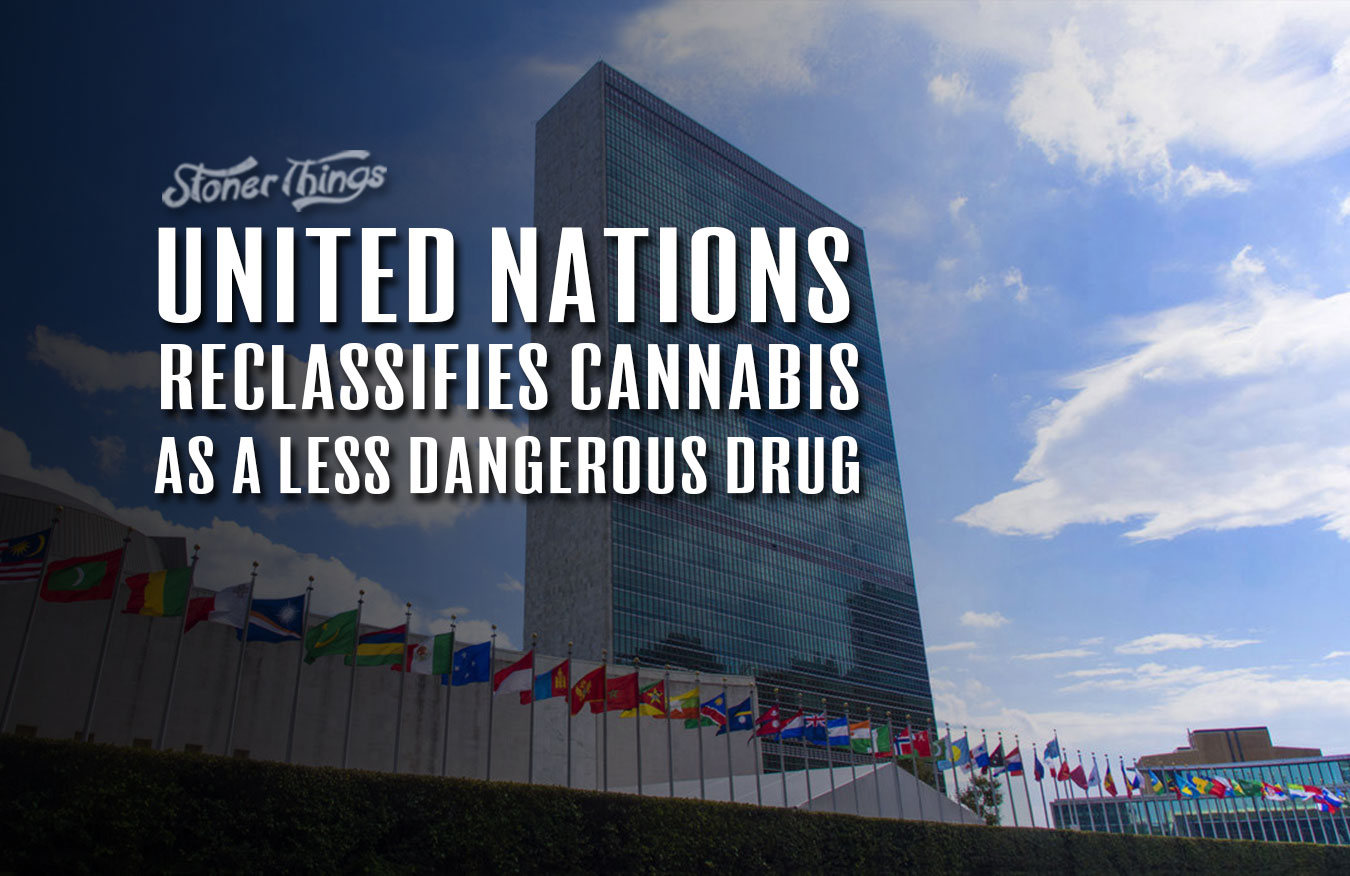 There’s a growing global momentum around decriminalizing pot. The infamous U.S. Drug War influenced not only America, but the entire world, as the United Nations took a dim view of marijuana early on in its existence. A UN document from the early 1960’s reads like a classic episode of Dragnet, describing a few places around India and Pakistan where cannabis was used both medicinally and recreationally. Of course, today we know a lot more about cannabis and its medical benefits, and we know it is not the “gateway drug” it was claimed to be long ago. Thus, it’s about time the United Nations is reclassifying cannabis as a “less dangerous” drug — 59 years after it was classified as having no benefit to humans.

If this sounds familiar, remember that the UN has always been dominated by world superpowers, and the U.S. in particular. When the country set out to crack down on drugs — a policy that was replete with self-interests and dangerous misinformation — it spurred a global crackdown as well. These policies reached a fever pitch in the 1980’s and 90’s as draconian policing techniques wound up incarcerating Americans in record numbers. Globally, a similar crackdown caused marijuana dealers to join forces by necessity with ever more powerful cartels. The escalating drug wars have cost countless lives, however, and left practically no country without scars. The UN was wise to adapt to modern science and react to our own global history. It can be difficult to reverse course in such a political body, after all.

Some countries used the vote (which was 27 for and 25 against) to make statements as well. According to the UN, Ecuador advocated for a regulated cannabis market for production and sale. Chile, however, clung on to the notion that smoking pot has numerous detrimental effects. Japan said that while medical use might be OK, recreational use was too risky for society. The United States stuck to its official domestic policy that while pot might have some benefit as a raw material, it had to be strictly controlled because that raw material couldn’t safely be wielded by ordinary humans. In essence, only products derived from pot are safe — products made by big pharmaceutical firms, mostly.

The history of global cannabis prohibition is interesting, but in 1961 the UN effectively set global policy, limiting the use of cannabis to science and medicine. But the UN isn’t really an enforcement agency — nations are still sovereign and ruled internally, after all. The Dutch famously disagreed with the UN’s ruling and became a haven not just for hippies looking to try pot, but for serious cultivators who pioneered modern growing techniques we use to this day. The seeds of prohibition had been sown earlier, however, in the 1800’s and even earlier, as Napoleon wouldn’t allow his soldiers to partake when he invaded Egypt in 1798.

Ultimately marijuana prohibition has mostly led to more crime, worse health outcomes, and more problems than it’s worth. While the UN has limited power in making a change of policy, the ramifications for grants, assistance, political advising and many more aspects of our global network could be huge. At the very least, it indicates that the world is beginning to think a little differently about pot after generations of misunderstanding.