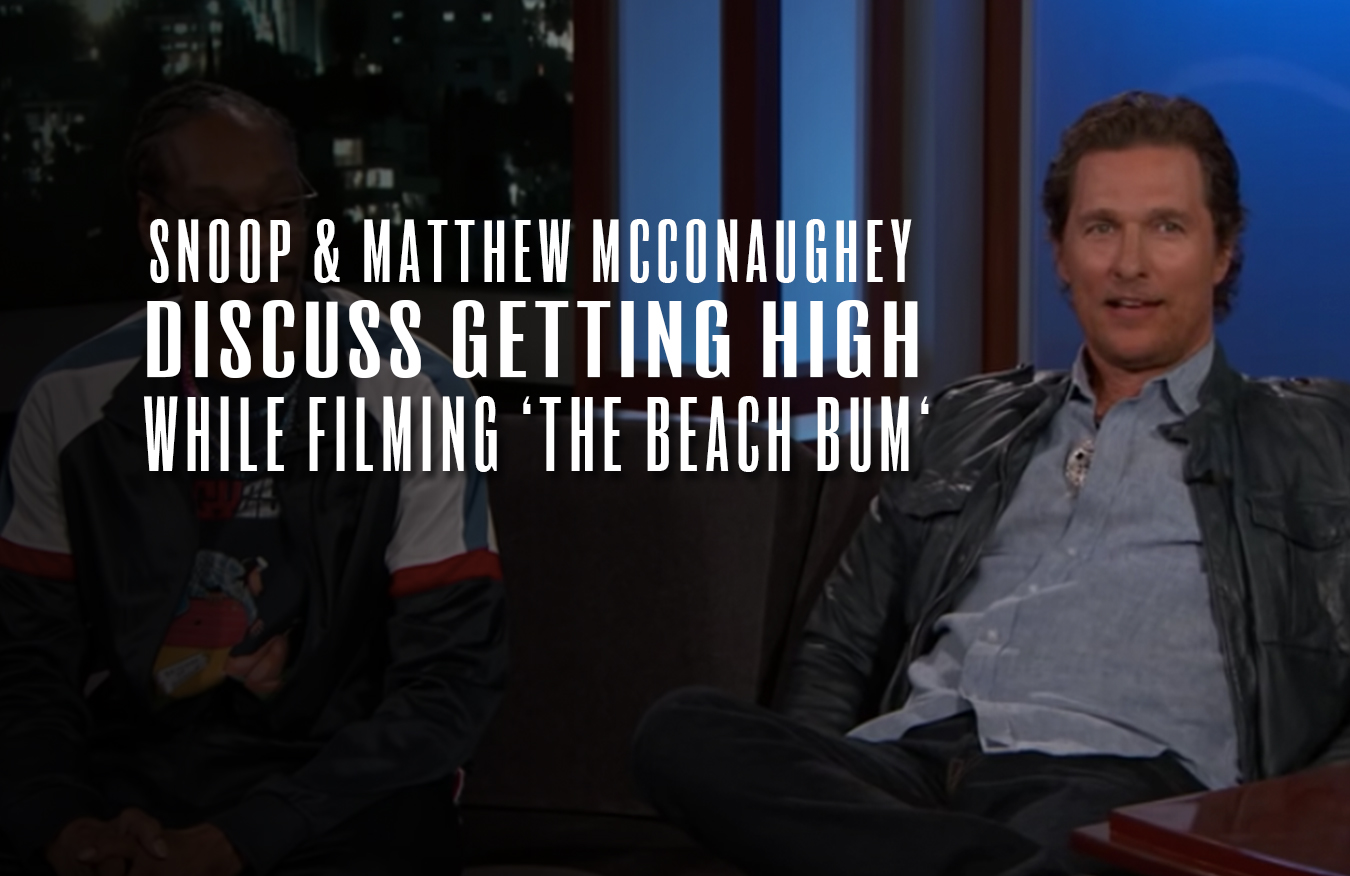 Once upon a time movies featuring characters getting high were relegated to “novelty acts” like Cheech and Chong or were presented as cautionary tales, like the infamous Reefer Madness. As prohibition has started to melt away, so have taboos and stereotypes. It’s unsurprising to see smarter characterizations of marijuana use in film these days, as cannabis culture remains a reflection of the times. So it is with a new movie from director Harmony Korine, called The Beach Bum. Korine made a splash in the 1990’s with his cinema verite masterpiece, Kids, which launched Chloe Sevigny’s career as well. The Beach Bum features Snoop Dogg and Matthew McConaughey, who are both high-profile marijuana advocates and enthusiasts. They’ve been working the promo circuit to promote the film, and had a few laughs over their shared interest in cannabis.

In this hilarious interview on Jimmy Kimmel, the two are clearly friends for life and not just because of their love of cannabis. Turns out Snoop was already a big fan of McConaughey, and wanted to work with him. He agreed to do the film provided he could change the name of his character — Korine basically wanted him to just play himself — and make a few script notes. The two performers seem so at ease with each other, it’s hard to believe they haven’t filmed one of those wacky “buddy cop” films previously. The one small clip from the movie looks better than any such film, however, as Snoop, who plays “Ray” as in “Lingerie,” describes a mystical strain of cannabis he says only grows in a certain special part of Jamaica. In the clip, Ray has created an entire purple room dedicated to this magical plant. As McConaughey tells Kimmel, “be ready to laugh.”

Back in 1999, McConaughey was arrested after playing bongos nude while high. Well, technically he was arrested for “disturbing the peace” when a Texas neighbor didn’t like him playing bongos and dancing in the nude. This incident is what led Kimmel to quip, “it’s like bongs and bongos came together.” Still, just because McConaughey is no stranger to cannabis doesn’t mean he planned on working while high. Although that’s something pretty familiar for Snoop.

In fact, the Dazed and Confused star tells a story of the first scene shot with he and Snoop, which was supposed to use “stunt weed” that’s just oregano rolled into a blunt. The scene lasts several minutes, and the blunt is passed between the two with copious amounts of smoke being inhaled all the while. McConaughey says he asked specifically for the oregano, but when he mentions feeling a little different Snoop tells him, “that’s not prop weed, that’s Snoop weed.” As you might imagine, Snoop’s a fan of high potency smoke. Snoop says McConaughey “rapped” for 13 hours after that scene!

It sounds like Beach Bum is a lighthearted departure for Harmony Korine, with pitch-perfect casting. Jimmy Buffett, the chart-topping sailor/singer who used to tour around the same places and times as The Grateful Dead, also makes a brief appearance in the film. While Buffett isn’t as outspoken as Snoop about cannabis, his fans have been known to be drinkers and smokers, and the cannabis culture is definitely a part of Buffett’s songwriting in subtle ways at times. Snoop says he truly enjoyed working with Buffett, although it’s clear that he and McConaughey made a lasting connection. Who knows, maybe we’ll see that buddy cop film some day after all — just probably not involving cracking down on weed smokers.