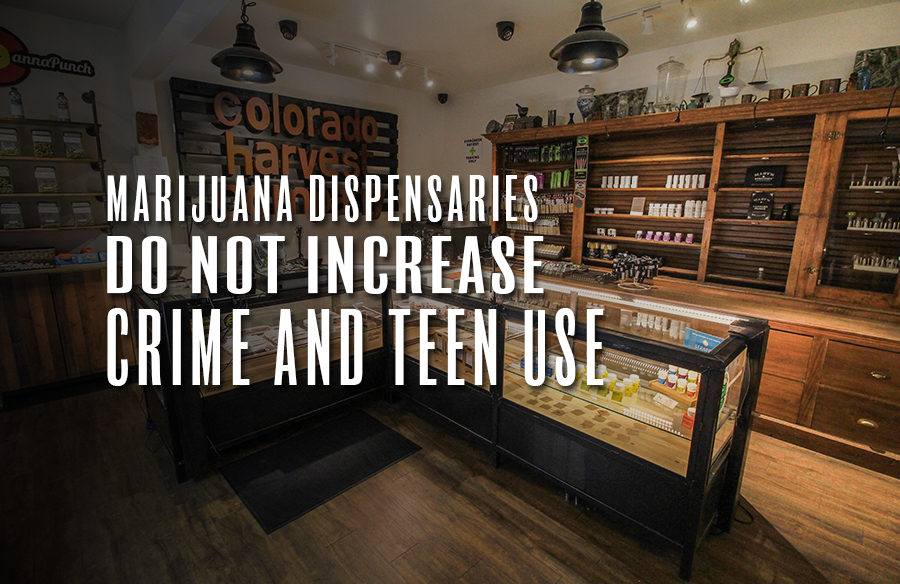 Humans are pattern-making machines, which is why change can be scary. It’s why things like cognitive biases are so hard to shake. And it’s why fears around legalization of cannabis dredged up the usual fear tactics. Some worried aloud that opening dispensaries would lead to more teen use and increased crime rates. Of course, alcohol prohibition promised to stamp out all sorts of societal ills, and we see how that well that worked out. As more states legalize cannabis, there’s an increasing body of evidence as to what the change in policy actually means, and the practical effects it has on society. In other words, now we have receipts.

After a few years of legal weed in states like Colorado and California, it’s now possible to debunk some dispensary myths. Although first, it’s important to note that just because cannabis is legal on the state level doesn’t mean a dispensary can be opened anywhere in one of the states that have allowed it to be sold — medically or recreationally. In many cases local municipalities are allowed to restrict or even prohibit dispensaries from opening. The theory is they’ll “cause crime rates to go up” and all the other criticisms mentioned above. What this has done is allowed data to accumulate on areas with and without dispensaries, and see which areas showed a rise in crime versus those that don’t. It’s actually a bit more complicated than that, but the point is you have a classic researcher’s dream: Two datasets to compare against one another.

So what did researchers find? NORML has a nice roundup of data from a number of sources on the Societal Impacts of Cannabis Dispensaries, but a recent detailed study conducted by Leafly really puts an end to many of the myths surrounding areas where cannabis has been legalized. Astoundingly, nearly two thirds of California has prohibited dispensaries, and in Colorado that number is around 65%. Why? It’s the usual fear tactics, which advocates are hoping to combat with facts and logic.

First, crime doesn’t go up. The Leafly study says, “An overwhelming majority of the studies available found no increase in crime related to the location of dispensaries or stores.” Data state-to-state is somewhat variable, but in some cases there was a rise in crime around liquor and tobacco stores but not cannabis dispensaries. In fact, in some cases the heightened security at dispensaries seemed to slightly lower crime in places via what’s called “guardianship” or making it really difficult for criminals to steal their cash. No one would ever think putting a bank in a neighborhood would increase robberies, would they?

Second, teen use doesn’t go up. Here researchers had to rely on state and federal-level numbers, but those numbers show through dozens of studies, that use is actually trending downwards for many teens. Keep in mind that dispensaries and even their websites are strict about legal age limits. While you might get away with sneaking a beer at a bar at age 20, that’s extremely unlikely to happen at a dispensary. But the data shows pretty clearly that across the nation, and in states that have fully legalized, teen use rates are going down since the early 2000’s. So much for that myth!

Finally, property rates don’t go down when a dispensary opens up in a neighborhood. Sometimes the opposite happens, really. There have been cases of property rates going up more than 8% when a dispensary opens. There are a number of reasons this might be true, but anyone who has spent time in a dispensary will know why. These are clean, well lit spaces that feature attractive signage and storefronts. Compared to liquor and tobacco stores, many cannabis dispensaries look like luxury car showrooms.

It’s pretty clear from the data that none of the bugaboos locals have about marijuana dispensaries are based in fact. Sadly, over 75 years of propaganda and drug war paranoia have ingrained these biases against the businesses that could actually improve the quality of life of the citizens in towns that have chosen to continue prohibition instead of following the state’s lead in legalizing. Here’s hoping future leaders in those towns will realize their fears are unfounded and come around to embracing this innovative new industry that’s only just beginning to realize its full potential.