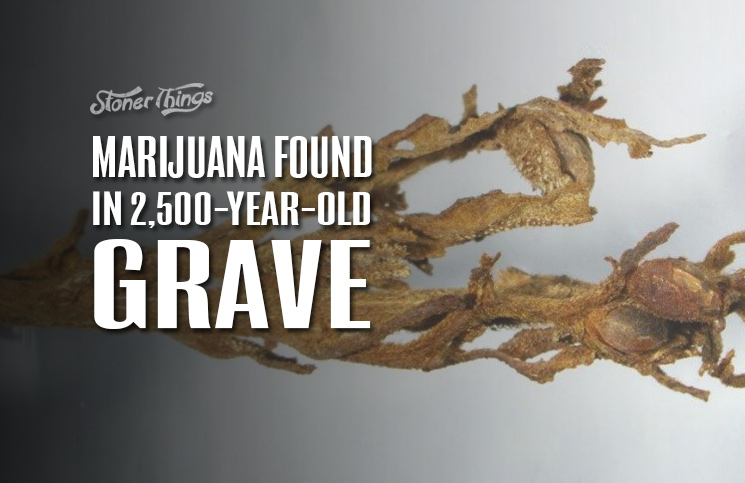 Archaeologists exploring an ancient burial site in China discovered a stash of 2,500-year-old marijuana plants, marking some of the oldest evidence of human pot consumption.

The team of scientists discovered 13 whole cannabis plants inside a tomb in northwest China. The plants were still mostly intact, preserved by the arid environment, though they were yellowed and dried.

The find adds new evidence to support the claim that humans have grown and used cannabis for thousands of years – not only as industrial hemp but as a psychoactive drug. And it supports the belief that many religious groups used marijuana in their sacred rites.

Hongen Jiang, an archaeologist who led the team from the University of the Chinese Academy of Sciences, reported the plants were used to cover a human body like a burial shroud. Jiang said this was the first such discovery of its kind in the world.

Marijuana has been found in other regions, including a famous site 400 miles away in Siberia. Jiang’s dig in the remote Turpan Basin also uncovered several other tombs with cannabis plants.

The team described its new find in October, saying the man in the cannabis shroud was in his mid-30s and was lying atop the roots of the plants. The tips, removed of their flowers, were wrapped around his face like a shroud, according to an article published by the archaeologists in the journal Economic Botany.

The tomb was found among 240 others in a dry, sparsely populated region between the Taklimakan and Gobi deserts, near the Mongolian border. Archaeologists believe the site was located along the Silk Road, an ancient trade route that linked Asia and Europe. A group of people known as the Subeixi lived and traded in the area, according to National Geographic.

Jiang’s team found three other tombs in the Turpan Basin cemetery that contained fruit, leaves, and stems from whole cannabis plants. They don’t know whether the pot grew wild, was harvested locally, or was imported via the Silk Road, but the fact that the plants were intact points to local cultivation.

The discovery is the latest in a string of digs that have uncovered cannabis leavings in ancient graves. The practice was apparently common for thousands of years in the mountainous areas of Central and East Asia, especially the border region between China, Mongolia, Kazakhstan, and Siberia.

In 2006, researchers in Russia determined that a 2,500-year-old mummy was buried in the Altai Mountains with cannabis pollen. They concluded the woman, known as the Ukok Princess, was a spiritual shaman who likely died of breast cancer and used marijuana to treat the pain.

That, along with other findings, suggests some ancient peoples used cannabis specifically to get high. Older discoveries in Northern China, dating back as far as 7,000 years, included hemp products but no evidence the plant was used as a drug.

Meanwhile, more recent burials in the region, dating back no further than 2,000 years, show no evidence of hemp products. That has led scientists to speculate that people who lived there 2,500 years ago sniffed or smoked marijuana as an intoxicant rather than using the plant for its hemp fibers.

Leave a comment and tell us: Do you think ancient people used marijuana as a drug?