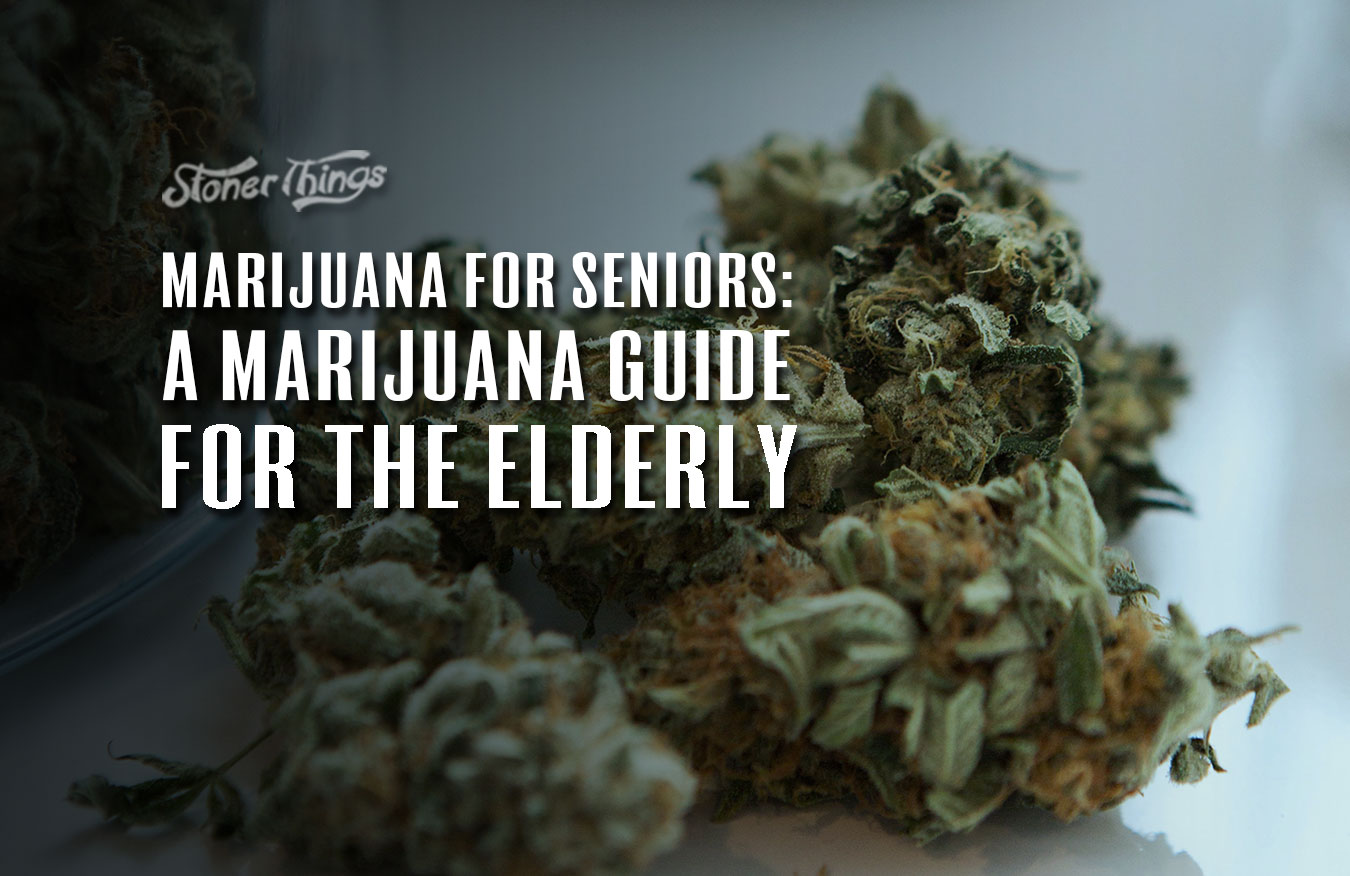 Older folks, aka “seniors” over 65, are using cannabis in increasing numbers. In fact, cannabis consumption by this demographic has doubled since 2015. What accounts for this? Are there health impacts? Are they good or bad? Why are seniors turning to the devil’s lettuce? Let’s dig a bit deeper into the trends and more general cannabis information for seniors — including potential health repercussions, the rationale for use, safety considerations, consumption methods, and the benefits.

First off, let’s cover the basics. Marijuana and hemp are the same plant, i.e., cannabis. Marijuana was a term coined during the black market days when cannabis was considered a street drug. We’ve learned a lot since then. They’re the same plant . . . but different. Let’s explore that some more.

The difference between “marijuana” and “hemp” is in the varying levels of various cannabinoids and terpenes, both of which are found in cannabis. However, cannabis in “marijuana” form has psychoactive effects, and that’s due to the higher concentration of THC. But marijuana also contains CBD and minor cannabinoids. On the flip side, we have hemp: same plant, different ratios of cannabinoids and terpenes. Hemp is the government’s name for cannabis that has low THC levels (per the feds, no more than 0.3%) and contains higher levels of CBD and minor cannabinoids than the version of the plant we call marijuana. Both produce cannabinoids. Both produce terpenes. It’s the varying percentage of cannabinoids that separates what we might call pot vs. hemp. No matter the percentage of cannabinoids, they’re both technically cannabis.

How many elderly people use cannabis?

In a recently released scholarly paper, co-authors Joseph Palmer, associate professor of population health at NYU Grossman School of Medicine, and Dr. Benjamin Han, assistant professor of geriatric medicine and palliative care (also at NYU Grossman School of Medicine) analyzed data from the National Survey on Drug Use and Health. This nationally representative survey included 15,000 people, not in residential facilities.

Within those results, it’s worth mentioning some notable trends among use of cannabis for seniors. Cannabis use among women over the age of 65 is increasing. There is an uptick for those with higher income levels and those with pre-existing mental health problems. More racial and ethnic minorities are consuming, too. Interestingly, cannabis use among older adults with diabetes is up. However, there is no medical correlation per se between cannabis use and diabetes management. While marijuana is considered medicine for serious health issues by many advocates, with this demographic, however, the increase in cannabis use tends to be by those that do not have chronic medical conditions.

One notable trend is that older adults that use alcohol are also consuming cannabis simultaneously. In fact, the International Journal of Drug Policy published a 2019 Washington state study of trends involving combined alcohol and cannabis use that showed a marked increase in adults 50 years and older.

What’s the reason for these trends? On the one hand, the stigma attached to marijuana use is getting lower by the minute as more states legalize pot. On the other hand, the increase in legalization means more interest from a medical perspective in consuming marijuana. In fact, a recent poll revealed that 94% of Americans support legal access to medical marijuana. Correspondingly, most states have some variation of legal access to cannabis. Even the 38-million member strong AARP (American Association of Retired Persons) has publicly supported medical marijuana use for older adults.

Is cannabis use safe for elderly people?

First and foremost, is it safe for older adults to consume cannabis? Yes.

Granted, cannabis with THC above 0.3% is still a Schedule 1 drug per the feds. But make no mistake; you can consume cannabis without the heady effects. Cannabis high in CBD (i.e., hemp) may provide physical and mental relief from various ailments. But if you want to get lifted with some THC, you can go that route too.

Generally speaking, there are some concerns about whether or not cannabis use in older folks is safe. Specifically:

How can elderly people benefit from cannabis use?

Are there benefits for older adults to use cannabis? The answer is yes, and there’s data to back that up. Seniors may benefit the most (when compared to other age groups) by using cannabis. How? Cannabis may positively affect common aging issues like inflammation, pain, disrupted sleep cycles, and more. Some older adults explored cannabis use after determining the hefty side effects from their prescribed medications were reducing their quality of life.

Medical marijuana for seniors may be helpful for those seeking relief from neuropathic pain, arthritis, sleep issues, and run-of-the-mill aches and pains from old injuries. The added plus? Minimal side effects (if any), sweet relief from chronic ailments, and a newfound sense of well-being.

On October 7, 2020, University of California San Diego School of Medicine researchers published an online study in the Journal of the American Geriatrics Society. The research showed that older adults use cannabis for medical purposes, primarily to seek relief from common health issues that include pain, sleeping problems, anxiety, and depression. 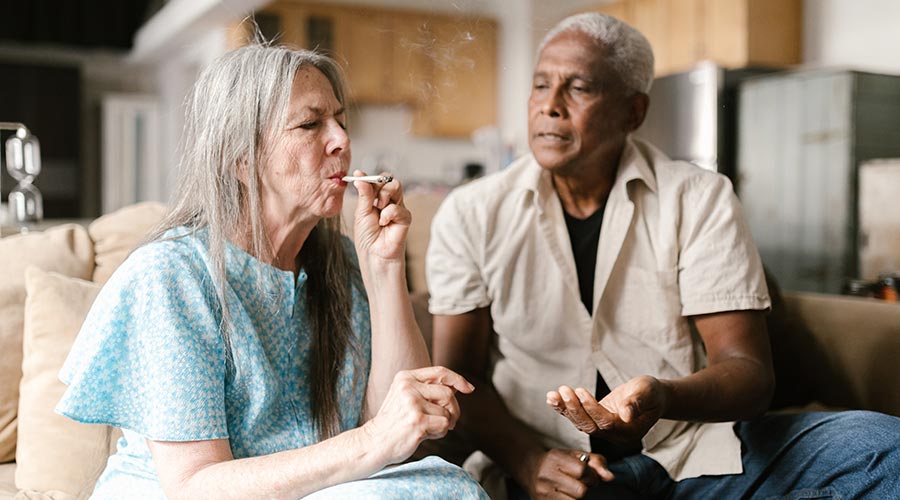 Another benefit? Reduction in opioid use and/or dosage. In the Israel study mentioned earlier, the surveyed medical cannabis patients (18.1%) reported declines in their opioid use or dose. That’s pretty notable. In essence, cannabis use may improve existing, chronic health conditions that may negatively impact older adults’ quality of life. This extends to regular prescribed medication use, which may have adverse effects on a patient’s gut, liver, kidneys, and more.

Researchers need more evidence-based research to fully understand and compare cannabis to the current medications in use related to various health conditions. Research topics would include how different cannabis formulations and dosages can treat the common health conditions in older adults and maximize the overall health benefit while minimizing ill effects. In the end, researchers hope to answer the question, is cannabis a safer alternative to current pharmaceutical treatments? Could cannabis use reduce the need for multiple medications? What conditions is cannabis most effective in treating?

Which are the best cannabis consumption methods for seniors?

Before we talk about the best consumption methods of cannabis for seniors, let’s backtrack a little bit. In a 10-week study by the Medicine for Seniors Clinic at UC San Diego Health, researchers found that over half (61%) of participating patients started using cannabis after age 60. That means that despite stereotypes that baby boomers were all pot-smoking hippies in the ’60s, this is a unique group new to cannabis use. That distinction is interesting because, in the UC San Diego Health study, the patients used cannabis via topical application rather than smoking or ingesting it.

There are pros and cons to each cannabis consumption method. It’s a matter of personal preference, the type of relief sought, and more. Let’s check out the most popular ways to use cannabis and why.

With the increased popularity and availability of cannabis products, more older adults will likely start using cannabis or cannabis-based products regularly. Considering the growing number of studies that highlight the role cannabis can play in reducing or eliminating the need for prescribed pharmaceutical drugs, older adults may find more benefits than ever from cannabis use.