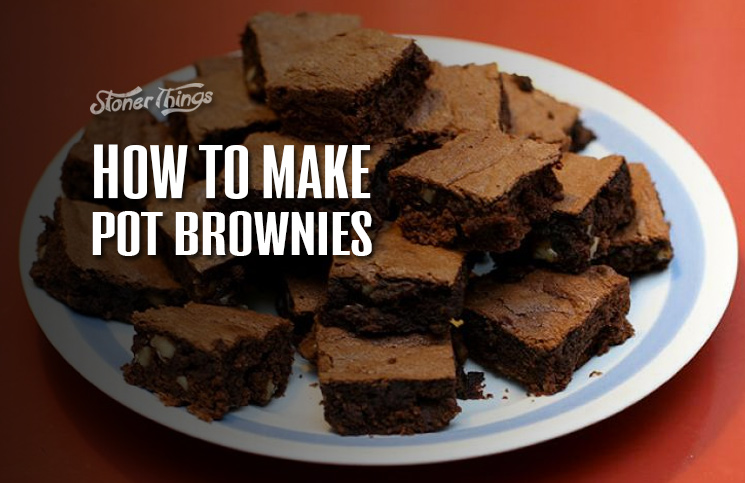 You can’t really call yourself a stoner if you’ve never baked – or at least eaten – pot brownies. Sure, marijuana cookies, THC chocolate bars, and CBD gummy bears are great, but there’s never anything quite as good as the original.

But how does one make pot brownies, exactly? Here’s a step-by-step guide to your first batch.

If you’ve never tried making weed brownies before, cut yourself a break and use prepackaged brownie mix. You can always start from scratch if you want, but novices may want to stay simple.

The most important part of learning how to make weed brownies is to make cannabutter. Cannabutter is butter that has been infused with marijuana and its constituent chemicals, especially THC or CBD. Once your cannabutter is prepared, you use it to make the brownies, adding it where the recipe calls for regular butter or oil.

1. Bring about a quart of water to a boil in a saucepan. You can give or take a bit of water, but make sure there’s enough to fully soak the cannabis when you add it.

2. Grind the weed you want to cook into the brownies. Again, if you plan to use an ounce, have at least four sticks of butter handy; if you’re keeping it small at a quarter ounce, you’ll only need one stick.

3. Once the water is boiling, place the butter gently into the water and wait until it has melted completely.

4. When the butter is melted, add the marijuana – simply drop the ground plant matter into the hot water. Then turn the range to low heat so the boil drops to a simmer. Let the mix simmer for about three hours or until the surface of the water turns thick and glossy.

5. Prepare a heat-proof bowl by using a rubber band to secure two layers of cheesecloth over the top. Next, pour the liquid mixture into the bowl through the cheesecloth. Now take the cloth by all four corners, wrap it around the remaining material, and squeeze into the bowl. The bowl should now contain all the filtered butter.

7. Finish by lifting the hardened cannabutter out of the bowl. Cut around the edges with a knife, lift the butter mass out, turn it upside down onto a plate, and scrape off any remaining drops of water. The butter is now ready to use.

Finally, follow the directions on the ready-mix box for the final steps on how to make weed brownies, substituting cannabutter for regular butter. It’s that simple. Chow down – and get baked!