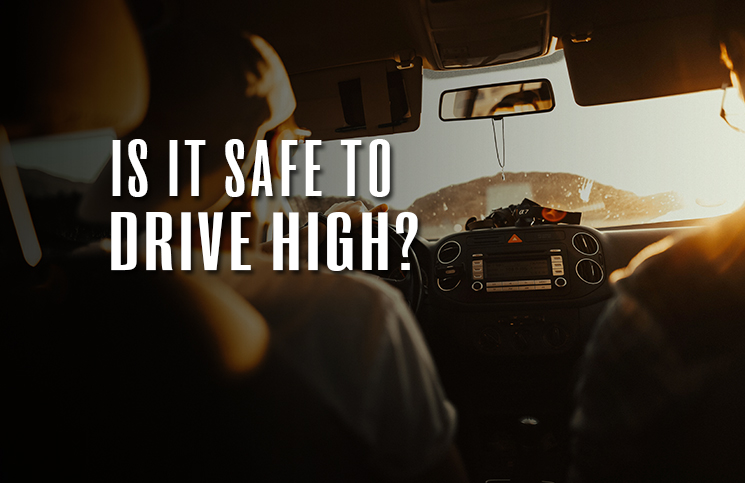 Is it safe to drive while high? Apparently nearly half of those who use marijuana think driving while stoned is OK. But is it, really? And how does it compare to drinking and driving? In the same survey, over two thirds of Americans don’t think it’s OK. Now that cannabis has been legalized in many states, we have some numbers to inform us of what’s real and what’s opinion. Let’s take a look.

First of all, when it comes to alcohol and pot there’s really no comparison. Alcohol’s systemic effects on the body are well-documented, direct, and measurable. Also, alcohol concentrations are easily understood when it comes to impairment because the “effect” on the body is the same in every person. After all, a breathalyzer can detect specific concentrations of booze in your bloodstream, hence legally defined limits on BAC (blood alcohol content). We know that drinking slows reaction times, impairs judgement, and reduces our ability to multitask. But wait, doesn’t marijuana do the same thing?

In fact, a health study from 2010 points to similar impairments in marijuana users versus drinkers. What’s interesting is that those taking marijuana were able to compensate in several ways, either by driving closer to the speed limit or just being more careful overall. The only real trouble with this study is that what constitutes alcohol is pretty similar but what constitutes “pot” can be highly variable and have different effects on different people. Alcohol is a simple substance, but the various strains and methods of ingesting cannabis make it more difficult to broadly apply some of these findings.

That’s definitely not to say smoking before you drive means you’re putting yourself at extreme risk, as would be more likely with drinking. This more recent article from The Verge points to a study done in states that had legalized. They found some conflicting data, but what was interesting was that, in the end, car fatalities remained stable. Rates rose slightly at first, which some theorize might have been due to less experienced users, but that’s really just a guess. Simple car crashes did increase, however. This Highway Loss Data Institute study found that collision claims did go up in states that had legalized fully.

The real wild card in all of this involves higher THC concentrations. As this Guardian article points out, the effects of a strain on one person can have different effects on another. Knowing exactly how much THC is going into your body with each puff has yet to be fully studied, especially as it pertains to driving. Also, the article notes that in some cases increased crash reporting could be from increased policing.

Clearly more research is needed. For now, driving high is questionable depending on how high you actually are. In most states the distinction isn’t whether you’ve been drinking, but whether you’re impaired. If for no other reason, that’s probably a good reason to not hop behind the wheel if you’re partaking copious amounts. If you’re not feeling particularly impaired, studies have shown that cannabis doesn’t seem to have the same level of impairment that alcohol does. As the saying goes, “your mileage may vary.”