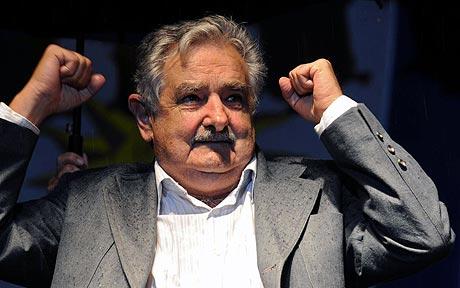 It’s official. The small Latin American country of Uruguay has legalized pot, making it the first nation to do so in recorded history.

Uruguay’s president signed legislation in December that makes marijuana legal in the country of 3.3 million people and subjects it to state regulation. The bill previously cleared both houses of the country’s congress, so it now becomes law.

Though weed is now fully legal in Uruguay, don’t pencil it into your pot tours just yet. Possession and consumption are legal only for Uruguayans, and their purchases will be tracked in a national database.

Residents will be allowed to buy up to 40 grams of weed from pharmacies each month and will be able to grow up to 480 grams, a little more than a pound, from six plants per family per year. Cannabis collectives will also be allowed. The drug will sell on the market for about $1.40 a gram, about a tenth of the going rate in most parts of the United States.

Uruguayan President José Mujica signed the legalization bill Dec. 23, following a vote by the lower house of congress in July and the Senate earlier in December. The law takes effect immediately, though officials have until April 9 to draft the regulations that will govern the program.

Uruguay wasn’t the first country to relax restrictions on marijuana. Places such as the Netherlands, Switzerland and Jamaica already have relatively lax rules regarding possession and consumption. Amsterdam and Jamaica are famous hotspots for weed tourism.

In 2012, voters in two American states, Colorado and Washington, legalized the sale and consumption of state-regulated marijuana. Retail sales begin Jan. 1 in Colorado and in the spring in Washington. Together, the two states dwarf Uruguay in size and population. But pot remains illegal at the federal level in the United States.

That means Uruguay is the first nation on the planet to both legalize and regulate the sale of cannabis to the public for recreational use. A driving force behind the reform was a desire to deprive drug cartels of control over the pot trade.

Uruguay has never been seen as the most likely laboratory for drug policy experiments. The people largely oppose legalization, though they’ve been tolerant of reforms, and the international community has pressured the South American country, unsuccessfully, to reverse course.

But Uruguay is led by a leftist political coalition, and the population is considered the most secular in the Western Hemisphere, with nearly 45 percent of the population self-identifying as atheist, agnostic or unaffiliated with a church. That combination has made it easier for the government to pass other controversial reforms legalizing abortion and gay marriage without losing public support.