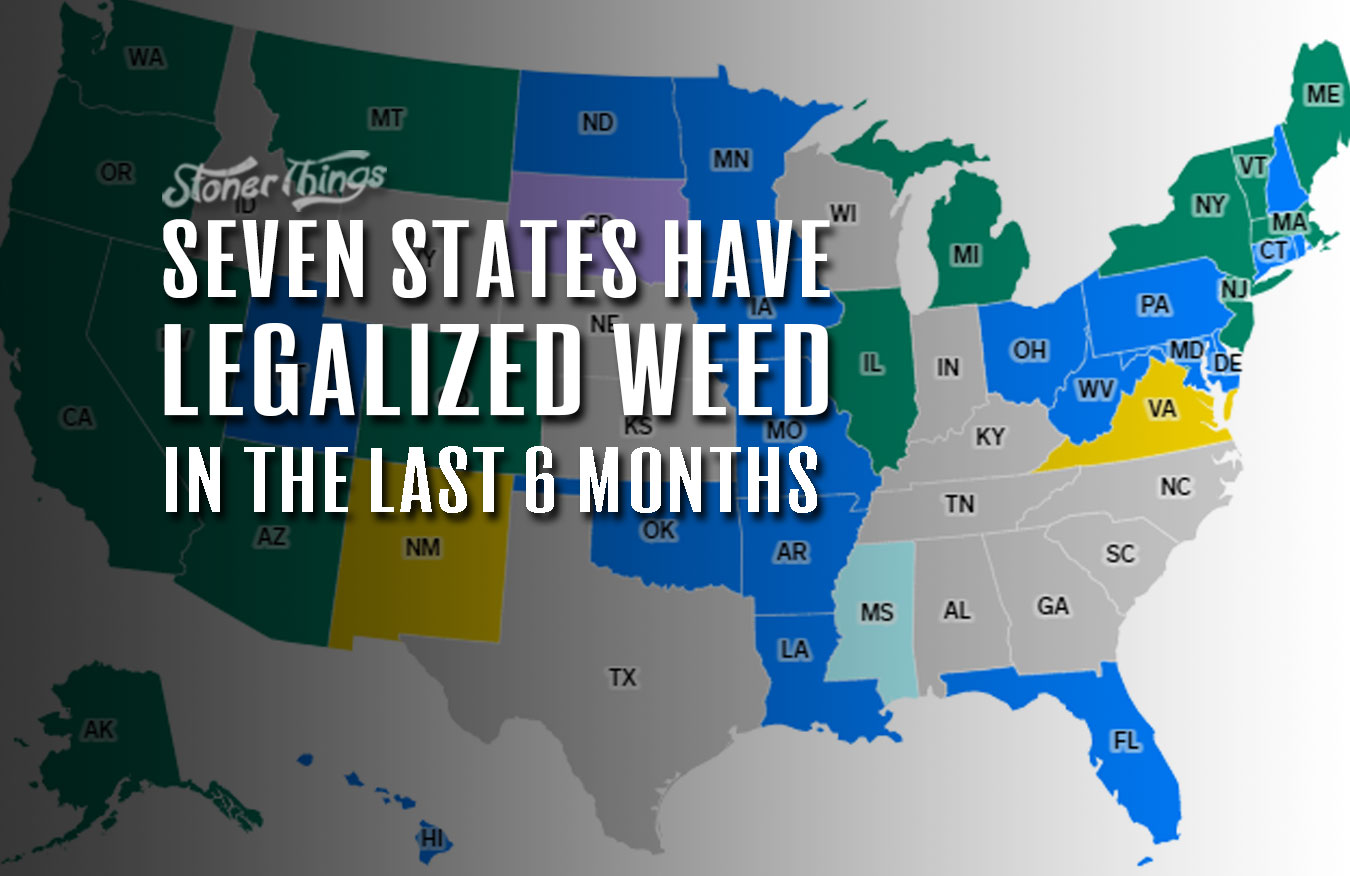 In the past six months, marijuana legalization in the US has gone into overdrive. Since the 2020 elections, seven states have joined the legal recreational pot club, meaning 17 states plus Washington, DC, are now on board. Put another way, 43 percent of Americans now live in a state where smoking weed for whatever reason is perfectly legal. If there’s a tipping point for federal cannabis legalization, we’re fast approaching it.

Let’s take a look at the newest members to do away with pot prohibition.

Arizona wasted no time in implementing the will of its voters after Proposition 207 passed on Election Day 2020, with 60 percent in favor of the measure. Less than three months after the vote, legal recreational pot sales began, thus giving Arizona the enviable title of the quickest state to put a voter-approved ballot measure into effect. How did they do it? A robust medical marijuana program, launched in 2010, boasting around 300,000 qualifying patients and 20,000 employees certainly helped, but meeting demand in the first few weeks of legal weed was still a challenge with many retailers forced to turn away business.

Things didn’t go quite as smoothly in Montana after residents approved their own weed legalization ballot measure with 57 percent of the vote. While the state Supreme Court threw out a last-minute attempt to quash the proposal just days before the election, some Montana lawmakers attempted to introduce legislation that would either restrict or delay the roll-out of legal recreational weed. But after a frantic few weeks of back and forth amendments in Congress and a defeat on the House floor, Montana lawmakers finally agreed upon a marijuana legalization bill that would see legal sales start from January next year. The legislation is now on its way to the governor’s desk for his signature.

South Dakota voters not only approved a recreational pot proposal on Election Day 2020 but another to legalize medical marijuana as well. But while the state’s medical cannabis program is set to launch on July 1, 2021, the adult-use measure has been subject to heavy-handed challenges by Gov. Kristi Noem. Her administration partly funded a legal challenge brought against the ballot measure by top South Dakota law enforcement officials. And the Circuit Court judge sided with the plaintiffs and ruled to overturn the voter-approved constitutional amendment. That ruling has been appealed, with South Dakota’s Supreme Court set to hear the arguments from both sides starting this week.

It looked like marijuana legalization would be a straightforward slam dunk in New Jersey. An ardent advocate for weed reform as governor, largely supportive lawmakers and polls which showed overwhelming support for the measure ahead of the Election Day vote. And while New Jersey voters did indeed vote in favor by a huge margin, getting a recreational pot legalization bill over the line in the legislature with Gov. Phil Murphy’s blessing proved rather complicated. In the meantime, thousands of NJ residents were arrested for low-level marijuana possession offenses. Eventually though, four months after the vote, New Jersey’s government settled its difference on issues like possession penalties for minors and social equity provisions before passing a cannabis legalization bill and signing it into law. Disappointingly, home grows will continue to be prohibited while municipalities are allowed to opt out of allowing pot retailers, even in towns where residents voted in favor of legal weed.

After two years of undelivered promises to legalize pot, Gov. Andrew Cuomo finally got the measure passed this year. But not in the way he would have liked. The governor had insisted on pushing legalization through his annual state budget, but many New York lawmakers disagreed with his plan to allocate marijuana tax revenues to the state’s general fund, as well as his initial insistence that he appoint the members of the state’s cannabis industry regulator. What a difference a year makes though. With the coronavirus outbreak derailing last year’s legalization efforts, Cuomo later found himself embroiled in allegations of sexual impropriety and mishandling of care home deaths during the early months of the pandemic. With his depleted political capital, the legislature, boasting a stronger Democratic and progressive majority after the elections, was able to legalize cannabis through a standalone bill with significant social equity measures in place.

Not long after, New Mexico passed its own measure to legalize recreational weed. Gov. Michelle Lujan Grisham had made marijuana legalization a priority from the outset of her administration but her calls for the measure intensified in response to the coronavirus outbreak. With New Mexico’s economy hit hard by the downturn, Grisham said legal sales of pot were essential for the state to create new jobs and income revenues. When talks over a cannabis legalization bill faltered in the legislature at the end of the regular session earlier this year, she convened a special session for the sole purpose of getting the bill over the line. With that done, New Mexico’s governor signed a bill to legalize possession and sales of weed into law.

Proving that all good things do indeed come in threes, Virginia soon followed New Mexico’s governor in signing a marijuana legalization bill into law and, in so doing, ensured the state is the first in the South to allow recreational pot possession. Initially, the bill passed by the General Assembly had slated a start date of January 1, 2024, for the measure to take effect, but Gov. Ralph Northam decided to send it back with a series of revisions including one to bring the start date forward to July this year. After accepting most of Northam’s proposed amendments, the governor signed the bill into law, though it’s expected that legal sales of pot will take longer than this summer to get off the ground.