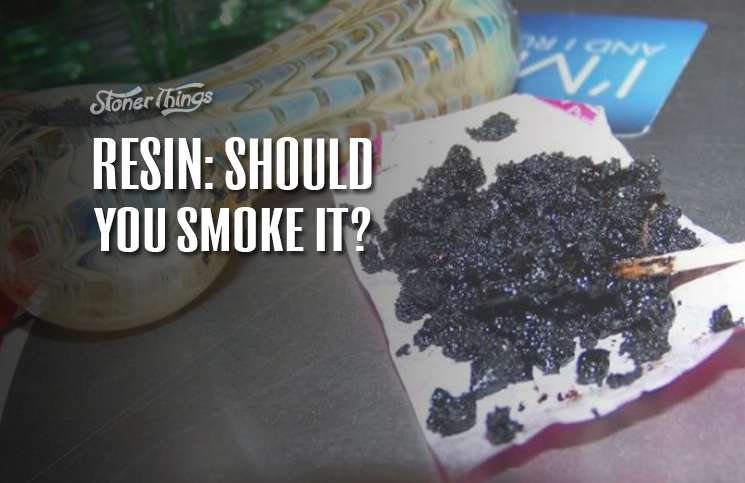 It’s the gunk that drives stoners nuts: marijuana resin. If you’ve ever finished off a bowl, a bong, or a bubbler, you’re familiar with the thick black oil your burnt-up dope leaves behind.

But what is weed resin? Can it get you high? And what’s the best way to smoke resin?

First off, marijuana resin is simply a combination of black ash and the sticky leavings of marijuana oil. It’s similar to hash oil, a product made by stripping THC from cannabis bud, but also very different.

Because resin has already been smoked, it contains less THC than dried bud and much less than concentrated hash oil. So while resin may remind you of real hash oil, smoking resin won’t give you anything like the same effect.

Smoking resin is a personal choice, but there are a few facts you should know before you do it.

1. Resin won’t get you very high

Less THC isn’t the same thing as no THC, so while marijuana resin is weak, it can still get you high – if you smoke enough of it. But it takes an awful lot, sort of like getting drunk off 3.2% beer. And if you’ve ever cleaned a pipe, you know weed resin is not the most pleasant substance in the world.

There are reasons people generally don’t smoke cannabis resin. Among other problems, it tastes like shit. Gone are all the aromatic subtleties of your favorite strains. All that’s left is a black mush that tastes like ash and tar – which is exactly what it is.

You certainly shouldn’t smoke marijuana resin on a regular basis. Most of what goes in your lungs will be tar and other noxious chemicals. And it’s not just that you’re inhaling these substances; you’re not inhaling much of anything else (besides a bit of THC). That means oxygen is pushed out of your lungs. This low-grade asphyxiation may even be the cause of most of your buzz.

So what’s the best way to smoke resin? First you need to collect the stuff. Use a nail file, razor blade – anything that works to scrape your cannabis resin off of the glass, ceramic, or other pipe material where it collects. But be careful: Weed resin is roughly as sticky as actual tar, so handle carefully.

Roll the resin into a ball, place it inside a bowl, and toke away. Don’t bother rolling the stuff in a joint or blunt, and avoid vaporizers. The best method may be a bong, as the water should filter out some of the harshest chemicals before they reach your lungs.

5. Resin can get you through a pinch

For all the reasons not to smoke weed resin, it may be just the thing in a tight spot. There’s nothing worse than running out of pot and money on the same day, and a decent supply of resin could get you through at least a few hours. Then again, if you’ve built up tolerance, it may not do anything for you at all.

Either way, the choice is yours. Cannabis resin is definitely gross, but let’s be honest: We’ve all been there once or twice.

Tell us: Have you ever had to resort to smoking resin? How did it go? Leave a comment below.