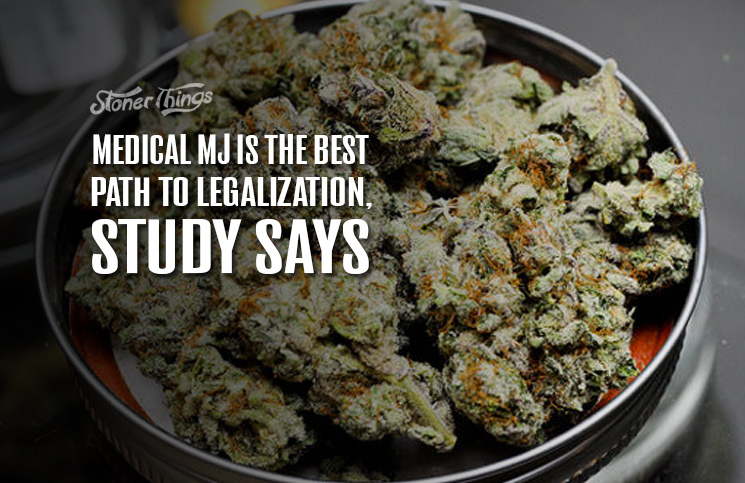 A new study suggests marijuana advocates are more likely to win the fight for legalization at the federal level if they pursue medical cannabis reforms first.

Efforts are underway to reschedule marijuana under the Controlled Substances Act so the drug can be legalized nationwide. Pot is already legal for recreation in four states, yet it remains illegal for any use under federal law.

More than two dozen other states allow medical marijuana, and the study says that’s the best way to achieve recreational legalization. Published by Hebrew University of Israel, the survey evaluated how patients respond the medicinal cannabis.

Conducted over six months, the study included 176 patients with chronic pain who didn’t respond to opiate painkillers. They were evaluated after treating their pain with marijuana and asked how they responded to the drug.

The results were telling: Roughly two thirds of patients reported improvement in their pain scores, which dropped from an average of 83.3 to 75. Most of them reported significant improvements in quality of life.

What’s more, the study found that regular cannabis use led to a 44 percent decrease in opiate consumption during the same time frame. Many patients were able to leave addictive opiates behind entirely.

Earlier studies likewise found that states with medical marijuana laws experience a lower average annual rate of opiate overdose deaths. And there are many other effective medicinal uses for the drug.

Among other reasons, this is why medical marijuana is so popular with the public, with more than 80 percent supporting it. And that suggests MMJ may be the best way to achieve full legalization.

Support for full legalization is strong, but not nearly as strong, hovering somewhere between 50 percent and 60 percent. That fact may have convinced many politicians the political risks of legalization are too great, even with majority support.

The study suggests the popularity of medical marijuana makes it the best path to legalization for recreation. Public opposition is almost nonexistent, making it much easier for political leaders to act.

Still, this approach faces major obstacles. Despite the widespread support, Congress and President Barack Obama have repeatedly refused to act. It is highly unlikely any progress will happen before the November presidential election.

But legalization could become much more likely after the election. If Democrats take the presidency and the Senate, they could move quickly to reform federal drug laws.

However, they’re much more likely to tackle MMJ than full legalization. Opposition could remain fierce even after November, preventing any radical move forward. And even the most progressive members of Congress may view medical cannabis as a big step toward making marijuana legal.