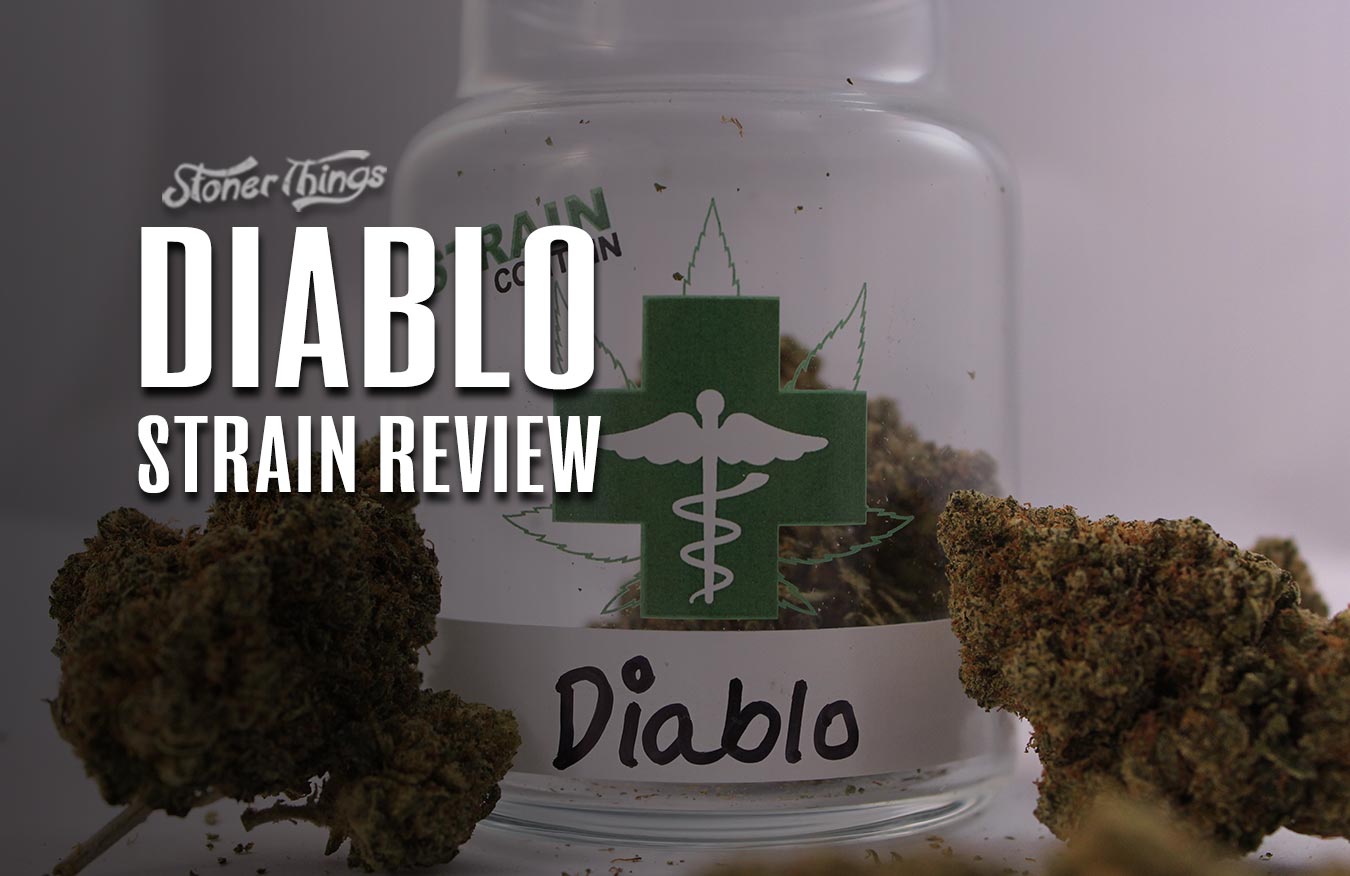 Diablo is another one of those strains that has been around for a super long time. But don’t let the name fool you — even though it has a spooky namesake, it’s actually pretty sweet and mellow once you get to know it. That is, until you over-indulge yourself. Even with its grandpa genes, it packs a wallop at 20-25% THC and tons of those classic terps that make you feel that first-time-ever-getting-high feeling. Below we’re diving deeper into all things Diablo in our all-encompassing Diablo strain review, including its scent, flavor, effects, medical uses, lineage, appearance and potency levels.

The Diablo weed strain is a hybrid with hybrid effects. It was first bred by Next Generation when they crossed Blueberry, Grapefruit, and South African Sativa. It got its start in British Columbia, where it took home second place at the 2002 BC Harvest Cup in the outdoor category. Even with its aggressive name, Diablo feels more like a warm hug than a fiery inferno. It has very mellow mental effects that can be more energizing or relaxing and soothing depending on how you’re feeling before you smoke it. It also comes with a tingly body buzz that might make you feel more relaxed and snackish. It checks in around 20-25% THC, which when you think about it, is insanely high for a strain that’s been around since the 90s. Alongside that potency comes a high terpene content, rich in terps like Myrcene, b-caryophyllene, and Limonene that give the strain its spicy and herbal flavor profile.

Diablo weed is also very pretty to look at. Its thick, spade-shaped buds look like a lot of classic cannabis, though the genetics have held on strongly. The flowers are all quite uniform and range in shades of light green to golden yellow with dark sage-colored highlights throughout. It’s sandy colored pistils give it a colorful appearance, especially under a flashlight where you can catch a glimpse of the thick blanket of crystalline trichomes they’re coated in. But appearances aside, you can smell this strain before you can see it. A bag of this stuff stinks up an entire room in the best way possible.

Diablo cannabis smells insanely unique, which makes a lot of sense since it has lots of fruity genetics but also those strong landrace genetics that give it that herbal, OG feel. That’s part of the reason that it’s lasted so long. Strains come and go all the time and people move onto the next big thing whenever they see something new, but Diablo is one of those cuts you just can’t get enough of. Seriously, if you ever get to step inside a garden growing Diablo, it’s impressive and you won’t want to miss it. As the flowers bloom, they take on a very herbal aroma with spicy, musky undertones. Towards the end of flowering, they smell dank and earthy with a splash of a patchouli-like sweetness. Dried flowers are no joke, either. Grinding up one of those nugs releases some intensely citrus-forward notes alongside a pungent herbal funk.

The flavor is where Diablo marijuana really shines, though. That first inhale is sharp and hot, which might indicate how it ended up getting its name in the first place. Your first impression is that of a warm spiciness alongside a pungent earthy herbaceousness. The smoke itself on the other hand is both spicy and sweet, so it tingles in the lungs a little bit. Even the tiniest puff of this stuff is sure to make you cough. But that’s okay, because the aftertaste is supremely refreshing. A lot of that herbal funk goes away, and the lasting impression that you’re left with is that of sweet summer berries and a sharp, sour citrus that might remind you of the weed-equivalent of grapefruit.

The effects start gripping you strongly the second you push out your first exhale. Diablo starts heavily in the mind, giving you a potent sense of deep, euphoric bliss. It may make you feel upbeat, happy and giggly. However, it might also just make you feel mellowed out and relaxed. It really depends on what you feel like doing with this one. If you need to get chores done, the effects won’t slow you down. The same can be said for if you just need to chill out — they won’t speed you up. However, Diablo is a bit of a creeper. A few minutes after your mental effects kick in, you’ll start to feel it in your body. It starts off pretty tingly, offering a whole-body buzz that can help you find some relief or power through your day. With that said, it can really be used at any time of day or night.

Medicinal Uses of the Diablo Strain

Because of the Diablo strain’s mellow, hybrid effects, it’s a great addition to your medicine cabinet. Not to mention, it’s extremely potent and rich in terpenes that help amplify its effects. From a mental standpoint, many medical marijuana patients love it for its upbeat effects that can help chase away sour moods and the rough effects of depression, stress, and anxiety. However, that creeping body buzz is fantastic against minor aches and pains, fatigue, PMS, and nausea. It’s also sure to cause a case of the munchies, so if you’re struggling with an appetite you might be in luck.

All in all, Diablo is a great strain for physical and mental relief at any time of day, or for just feeling your best while you go about your business. If you’re looking for potency, unmatched flavors, and happiness-amplifying effects, you’re going to want to check it out the next time you hit up your favorite dispensary.