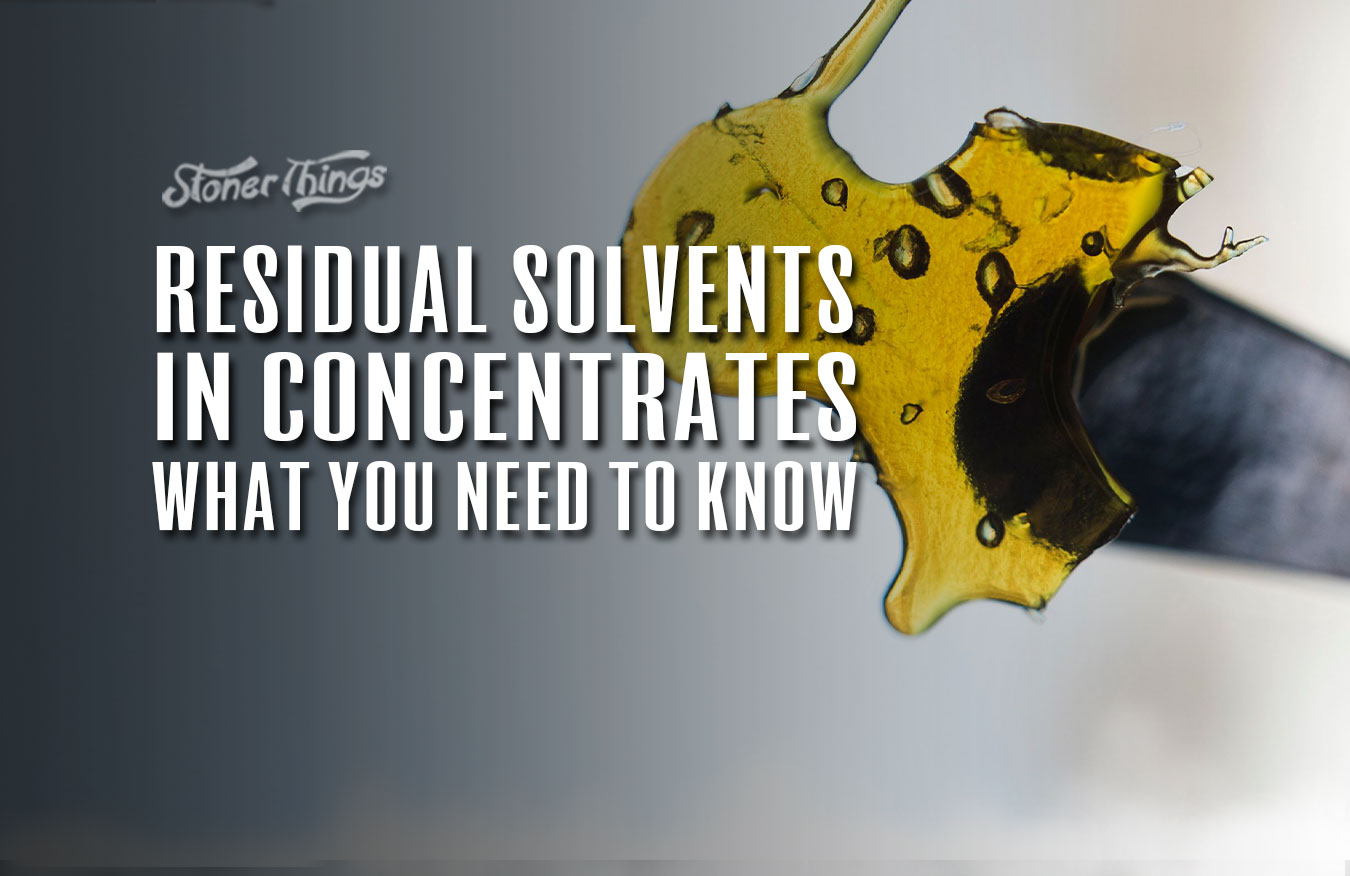 Last year, there was a huge scare over the adverse side effects on people caused by leftover solvents found in cannabis extracts — specifically, vape cartridges. Commonly referred to as the vape crisis, hundreds of people got sick with a respiratory illness caused by the leftover solvents and vitamin E acetate found in illicit and illegitimate cannabis vape cartridges. This scare has left many people wondering just how safe cannabis extracts are when they’re manufactured using chemical solvents like butane, propane, and ethanol.

While there are several other ways for extract specialists to isolate cannabinoids and terpenes from plant materials, there’s still a pretty huge variety of concentrates available that are manufactured using solvents and hydrocarbons to extract the THC, CBD, terpenes, and flavonoids from the cannabis plant. While extractors do their best to produce a pure product, there’s a good chance that they’ll still contain trace amounts of these chemical solvents. When consumed at high levels, solvents can pose serious health risks, many of which we don’t fully understand.

In regulated markets, like recreational and medical cannabis markets, there are laws in place to ensure that products can only be sold if they contain levels of solvents that are below the legal limits. These products are deemed safe for consumption by the government and backed by scientists. However, illegal and illicit markets are unregulated. It can be impossible to tell how much solvent is left in black-market products, which is why it’s so important to only buy cannabis extracts from legitimate businesses. Below, we’ll dive deeper into the rules and regulations surrounding cannabis extracts and residual solvents so that you can know the risks involved with consuming these products. Here’s everything you need to know about leftover solvents in concentrates:

What are the rules for leftover solvents in cannabis extracts?

Since it’s basically impossible to remove all residual solvents from an extract, the authorities have set a few legal limits that are acceptable in the final product based on the type of solvent. These figures are based in scientific evaluation on the side effects of these solvents on our bodies, which we’ll touch on in the next section. With that in mind, only a very small amount of solvents are permitted to be in the final product if they are to be sold.

Solvents are classified by the potential of toxicity. There are 3 divisions – Class 1, Class 2, and Class 3. Solvents with low toxic potential are class 3 solvents and are the only ones recommended for making cannabis concentrates and extracts safely. However, class 1 and 2 solvents can also make their way into the final product since they are usually impurities, by-products, or contaminants found in the class 3 solvent. An example would be benzene, which is a dangerous hydrocarbon labeled as a class 1 solvent. It’s found in natural gasses like butane and propane when the gas is heated and is a pretty harmful carcinogenic  substance, so legal requirements state that a product can contain no more than two parts of benzene per million.

While each state has different regulations for cannabis products, we’ll cover Colorado as an example since their testing and residual solvent laws are pretty rigid. As one of the older markets, many states model their laws for residual solvents on Colorado’s. For each gram of concentrates, there is a list of acceptable levels

What are the long-term health implications of inhaling leftover solvents?

There are several health implications involved with ingesting chemical solvents found in cannabis extracts. The main ones are CO2 (carbon dioxide), ethanol, and butane. When you vape or dab a concentrate or eat an edible made with distillate you might find residual solvents.

Residual CO2 isn’t usually a concern since it’s a natural byproduct of our own respiration, but butane and ethanol along with Hexane, Benzene, and Xylenes can make you sick. Here’s a rundown on each of the solvents and their health risks. Keep in mind that most of the tests run on these solvents to gauge their effect on animals and humans contain a much higher concentration of the solvent than you’ll find in a gram that’s been tested and purchased from a regulated dispensary.

Butane: Many extracts are extracted with butane, including shatter. There is a bit of controversy on what a safe amount of butane to ingest is. Since we don’t know the full gravity of long-term effects on the body, we can’t say that it’s 100% safe at any level. However, the authorities disagree and allow extracts to contain up to 5000 ppm of residual butane in the final product. Black-market products could contain even more. According to a handful of studies, butane inhalation (in high doses) can cause organ failure and cardiac damage.

Ethanol: Ethanol is usually used to make distillate that finds its way into vape cartridges. Ethanol has been used safely for many years, so it’s deemed pretty safe for long-term exposure. In small concentrations, it is unlikely to cause harm. However, a study in 2018 found that ethanol in high doses could be addictive, leading to cravings, tolerance, and dependence.

Benzene: Benzene is a known carcinogen that causes birth defects and affects your bone marrow. It’s only allowed up to two parts per million, which is deemed a safe level. It’s a by-product of burning butane.

Hexane: Hexane is a class 2 solvent that can be found in cleaning products. They typically make their way into concentrates when the equipment is cleaned after each batch. It has a negative effect on the nervous system and can cause headaches, nausea, dizziness and vomiting when inhaled at higher levels. No more than 290 parts per million is allowed in a safe gram of cannabis concentrates.

Xylenes: Xylenes are a byproduct of burning fuel or gas. Like hexane, they also depress the central nervous system. Depending on the level of exposure, Xylenes can cause nausea and vomiting, headaches and dizziness, and other symptoms. Xylenes are considered a dangerous carcinogen, so a gram of finished product must contain less than one part per million to be legally sold.

Is there a way to make sure your cannabis products are safe?

All in all, if you’re purchasing cannabis products from reputable, regulated sources, your extracts are deemed to be safe by public health officials and other authorities. Purchasing from a regulated market is truly the only real way to make sure your products are safe. Regulated extract companies use the highest-quality solvents to help mitigate the risk of contamination by benzene or xylenes and use the industry best practices to ensure that solvents are fully removed after processing. In Colorado and some other states, it’s also a law for these products to be rigorously tested to ensure they meet the standards set by the authorities or else the products must be destroyed.

However, if you want to truly avoid the risks associated with residual solvents, try switching to hash that isn’t extracted using solvents. Solventless extracts include rosin, bubble or ice hash, kief, budder, and freeze-dried hash oil. You can also check the packages on your extracts to get a better understanding of how many cannabinoids and residual solvents the product might contain.