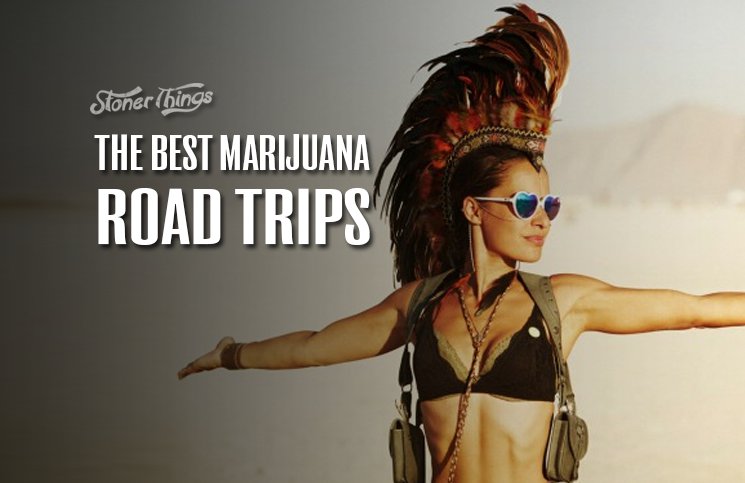 Let’s be clear about one thing: We don’t want you driving high. You could damage your car, you could hurt someone, or you could get busted. Driving stoned is safer than driving drunk, but it’s still dangerous enough.

That said, as long as you’re safe, there’s nothing better than a road trip looking for good weed, or good places to use it. There’s something almost magical about the mix of pot and pavement (though, again, not at the same time).

So here are a few of the best stoner road trip destinations for leaning back, lighting up, and enjoying the view.

The scenery is beyond breathtaking, whether viewed from Canada or the United States. Nature doesn’t get more spectacular than the sight of 6 million cubic feet of water per minute pouring over a rock wall 150 feet tall and more than 2,000 feet from end to end.

The Canadian side of the border has turned into a kitschy tourist trap, while the U.S. side is headed in that direction. But that just makes the experience more fun for a stoner.

Sneak into the bushes and smoke a J before crossing the bridge to Canada. But use up everything you have: You’ll be passing through customs, and you never know. Smuggling even small amounts of weed across international borders is dicey.

There may be no better backdrop on the planet against which to smoke something fat. No artificial entertainment necessary, the Grand Canyon will blow your mind, guaranteed, especially if you’re high.

There’s one big drawback, though: The place is hard to get to. That’s in part because it’s located in the Arizona desert and partly because it’s just so damn big. Unless you have a few extra days to spare, trying to see both the North Rim and the South Rim in one trip is a lost cause.

The Grand Canyon National Park is located about six hours drive time from Las Vegas. If you can stretch your trip out a day or two, the park is about 10.5 hours from Los Angeles – a doable one-day drive, but a long one.

Bring a sativa with you, dangle your feet, and toke at the edge of glory. You’ll want to be awake and alert for every beautiful color, every magnificent rock formation, and the distant glimmer of the Colorado River a mile below.

Why not mix marijuana and mountains? Glenwood Springs, nestled in the Rockies west of Denver, may just be the prettiest place on Earth that has a recreational pot shop.

It’s also considered one of the most fun towns in America. That, at least, is what USA Today and the Rand McNally Co. called Glenwood Springs in 2011.

Go into the mountains, find a nice spot high up, away from people, and smoke a bowl in the midst of pure nature. Be careful not to get caught toking in public, though. It’s illegal, and they do write tickets.

Glenwood Springs is located less than three hours from Denver and nine hours from Las Vegas. Albuquerque, N.M., is less than eight hours away.

Weed is legal in Portland, and residents can use and carry the drug now without threat of criminal or even civil sanction.

Plus, Portland is just a great little city. Founded in 1786 after more than 150 years of continuous settlement, the city is centered on the Old Port, once a major shipping hub for New England merchants.

Take a trip in summer and soak in Portland’s rustic cobblestone streets, its historic architecture, and its absolute charm. Not to mention the fact that you can smoke weed in freedom.

Portland is less than two hours from Boston and less than three from Providence, R.I. New York City is a little bit more than five hours away.

If you have a few days free before Labor Day, and you’re looking for a place to chill with your fellow potheads, there’s no better place than the Black Rock Desert of northern Nevada.

Every year, this desolate landscape is home to Burning Man, a week-long festival that attracts more than 50,000 participants. A literal city rises out of the desert from scratch, then disappears with little trace.

Burning Man is about individual expression, the existential experience of life, and spiritual exploration. It’s based in libertarian ideals, and pot is a big part of the picture. If you can’t find fellow tokers here, well, you just aren’t looking.

Black Rock City is located in the desert about three hours north of Reno, Nev. Las Vegas is a little more than nine hours away.