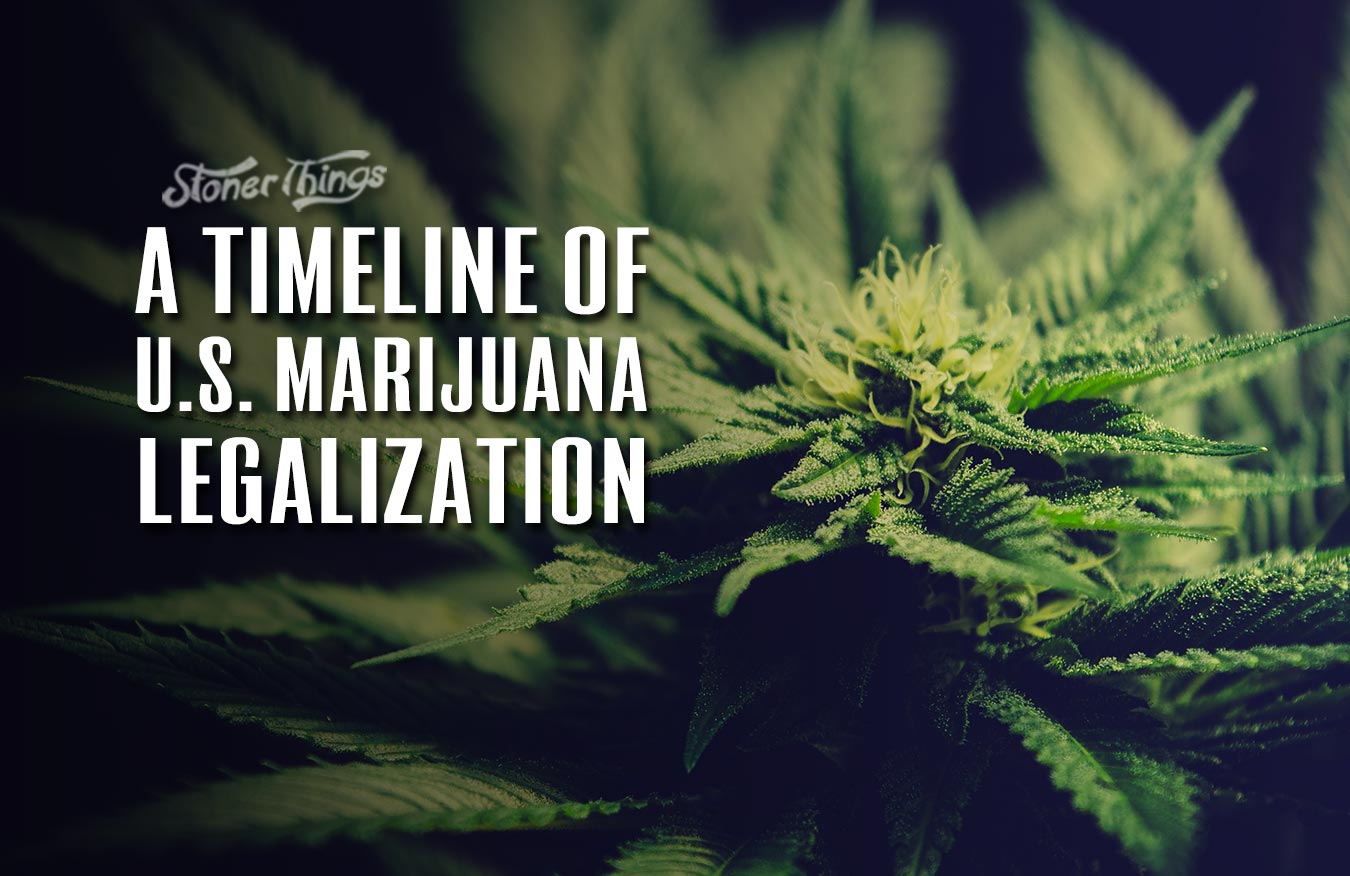 Following decades of cannabis prohibition in the US, it’s easy to forget how far marijuana legalization has come in a relatively short space of time.

It’s not so long ago that the idea of walking into a local shop to buy some bud would have been little more than a fantasy.

So we don’t have to wait to bore the grandkids with “back in my day” tales about buying weed down dingy alleyways. We can already make the next generation’s eyes roll at our past pot-buying challenges.

Of course, legal recreational weed isn’t a reality across the US yet, but we’re getting there.

Indeed, the speed of cannabis reform means it’s challenging to keep track of which states have legalized adult-use pot and when.

Luckily, we’re on hand to break it all down, so you can get your facts straight when educating the young whippersnapper stoners of tomorrow.

2012 is Year Zero for marijuana legalization in the US, as far as legal sales go.

While many states had already legalized pot use on private property or for medical purposes, 2012 is the year that Colorado and Washington became the first states to legalize recreational cannabis sales thanks to voter-approved ballot initiatives on Election Day.

Home cultivation of up to six plants, three of which can be flowering, at a maximum of 12 per household, was also now permitted in Colorado but remains prohibited in Washington.

Alaska, Oregon and the District of Columbia were the next states to join the pot party through voter-approved ballot initiatives.

In Alaska, it became legal to possess up to one ounce of flower and seven grams of concentrates, and to grow up to six plants at home, three of which can be flowering, at a maximum of 12 per household.

After the successful vote, Oregon lawmakers passed enabling legislation which took effect in 2015 to legalize possession of up to eight ounces of flower and home cultivation of up to four plants.

In Washington, D.C., it became legal to possess up to two ounces of flower and grow up to six plants at home, but the voter-approved ballot measure did not provide for commercial cultivation or legal adult-use sales.

The first recreational pot shops in the US open their doors

The first legal adult-use weed dispensaries in the US opened for business in Colorado on New Year’s Day 2014, with Washington State following suit several months later.

Marijuana legalization kicked up a gear again in 2016, with four more states voting to legalize adult-use pot on Election Day.

In California, possession of up to one ounce of flower, eight grams of concentrates and cultivation of up to six plants was legalized for adults.

Following the voter-approved measure in Maine, lawmakers eventually passed slightly watered-down enabling legislation, which took effect in 2018 and allows adults to possess up to two ounces of flower and grow up to three plants for personal use.

In Massachusetts, it became legal for adults to possess up to one ounce of flower and five grams of concentrates in public, ten ounces of flower and its equivalent in concentrates at home, and to grow up to six plants at home with a maximum of 12 per household.

In Nevada, possession of up to one ounce of flower and 3.5 grams of concentrates by adults became legal on January 1, 2017, but only those living more than 25 miles away from a recreational dispensary would be permitted to grow cannabis at home.

This is the year that Vermont became the first state in the US to legalize adult-use pot through the legislature, rather than a ballot initiative.

While the legalization bill didn’t allow for the creation of a regulated adult-use cannabis market, possession of up to one ounce of weed and cultivation of up to six plants at home became legal for adults.

Michigan is another state to legalize adult-use marijuana through a ballot measure, with the resulting enabling legislation allowing adults to possess up to 2.5 ounces of flower, 15 grams of concentrates and to grow up to 12 plants at home for personal use.

Illinois became the second state to legalize adult-use pot through the legislature, with the approved legislation taking effect on January 1, 2020.

On that day, it became legal for Illinois residents to purchase and possess up to 30 grams of flower and five grams of concentrates, with out-of-state visitors permitted half these amounts. Home cultivation, however, is only allowed for registered medical marijuana patients.

2020 was another bumper year at the ballot box for marijuana reform with four states approving adult-use cannabis on Election Day. Unfortunately, the result in South Dakota was later overturned by the state Supreme Court.

Arizona wasted no time in putting its voter-approved measure into effect though. Possession of up to one ounce of flower and five grams of concentrates, and home cultivation of up to six plants at a maximum of 12 per household was immediately legalized. Retail adult-use cannabis sales soon followed in January, 2021.

After lawmakers passed slightly watered-down enabling legislation in Montana, it became legal to possess up to one ounce of flower and eight grams of concentrates, and to grow up to two plants for personal use at a maximum of four per household.

In New Jersey, lawmakers eventually passed enabling legislation to allow adults to possess up to six ounces of flower and 17 grams of concentrates, but home cultivation remains prohibited.

2021 was another pivotal year for marijuana legalization in the US, with four state legislatures moving to approve the reform.

In New Mexico, it became legal for adults to possess up to two ounces of flower and 16 grams of concentrates in public, with no set possession limits for private residences. Home cultivation of up to 12 plants for personal use is also permitted, and adults can apply for a permit to grow more if they wish to.

New York lawmakers finally came to an agreement on marijuana legalization in the state. The resulting legislation took immediate effect, with possession of up to three ounces of flower and 24 grams of concentrates now legal as well as home cultivation of up six plants at a maximum of 12 per household.

Virginia became the first state with legal recreational cannabis in the South. It’s now legal for adults to possess up to one ounce of flower and cultivate up to four plants at home.