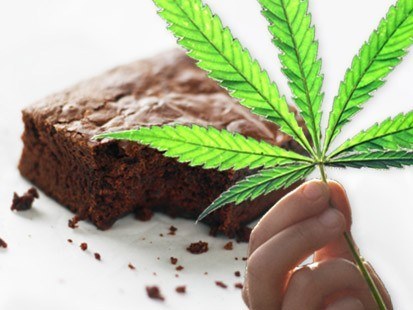 After the joint, and perhaps the bong, weed brownies are probably the most common way to ingest cannabis. A good brownie is indeed a wonderful thing, but be forewarned: it is easy to get carried away and put too much weed into the mix or to eat one too many pieces. Keep in mind that marijuana ingested orally can be a significantly more potent experience than smoking a joint or a pipe bowl, and the results can be much longer lasting. A bit of judiciousness therefore goes a long way when talking about pot brownies.

As with all marijuana-laden edibles, it is important to learn about the basic principle of decarboxylation before proceeding. Decarboxylation essentially involves heating the marijuana to about 300° F before mixing it with your other ingredients. This process will cause the THCA cannabinoids in marijuana – which are in acidic form – to lose a carbon dioxide molecule. This essentially converts it into THC that the body can use. Without this crucial step, the weed that you include in your pot brownies will not have as potent as effect as it could have, and a lot of it will simply end up wasted.

Most recipes for brownies will include steps that essentially decarboxylate the cannabis, sparing you the trouble of having to do it in it’s own step. In this particular recipe, butter is used to activate and extract the THC from the plant matter.

Turn on the heat but keep it on low until the water in the larger pot starts to simmer. After the butter has melted thoroughly, add the ground marijuana to the pot, ensuring that it is all covered with butter. You can then turn the heat down slightly while keeping the simmering going. Because no heat is applied directly onto the weed-butter mixture, there is no chance that it will burn and produce a bitter flavor.

Leave the butter mixture simmering for a good long time (some experts recommend simmering the mixture for as long as two to three hours!). After it is done, the marijuana can be filtered out of the butter and the resulting product can be used in virtually any recipe… including pot brownies!

Particularly for marijuana brownies, simply spread the butter throughout the bottom of a baking pan, pour the brownie mixture over the top and pop it into the oven at 350° F for 30 minutes to one hour. Your pot brownies will then be ready to enjoy!

Remember: don’t take too much! It might be best to start off with one and then to take more as you get used to the strong effects.