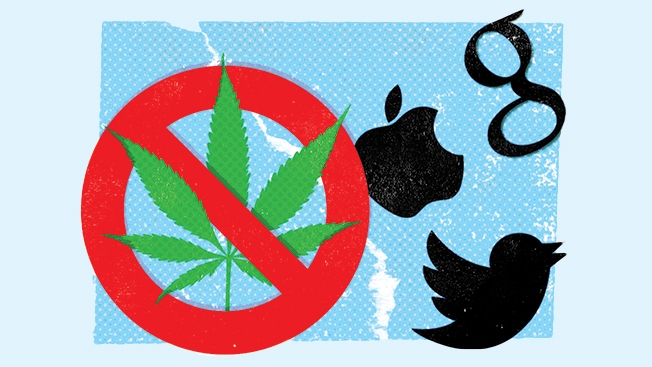 Marijuana may be legal in some parts of the country, with more to come, but don’t expect to see ads for your local pot shops splashed across your favorite Web platforms anytime soon.

Facebook and Google confirmed in January that they won’t let weed providers advertise on their sites, not even to target surfers in states such as Colorado and Washington where recreational pot is legal.

Spokespeople for both companies said they wouldn’t change their existing policies, which bar ads promoting drugs. They’re not planning to make any exceptions for marijuana, regardless of changing law.

Both Google and Facebook offer services that allow advertisers to target their messages only to people in certain locations. But both companies said they weren’t likely to let weed providers use those services in the near future.

The risk of allowing ads “promoting the drug in certain states or countries where it is legal is too high (no pun intended) for us to consider at this time,” said Facebook spokesman Tim Rathschmidt. Google likewise bans ads for “substances that can alter the function of the brain to induce unnatural euphoria, or alter reality.”

That position is more than a little hypocritical, however, since Google, like Facebook, allows ads for alcohol products. Alcohol is, by definition, a substance that alters brain function “to induce unnatural euphoria, or alter reality.”

“If Google and Facebook can target alcohol ads to adults, they should be able to target ads to adults about a less harmful substance like marijuana in states where it is legal,” said Mason Tvert, spokesman for the Marijuana Policy Project. “Such an arbitrary and hypocritical decision is not going to sit well with a lot of people who utilize these websites.”

Facebook’s policy is slightly less two-faced than Google’s: it says advertisements “may not promote or facilitate the sale or consumption of illegal or recreational drugs, tobacco products, or drug or tobacco paraphernalia.”

Facebook does allow ads that push legalization and marijuana advocacy, but not those that promote or facilitate the sale or use of the drug.

“The legality around the sale and use of marijuana greatly varies around the world, which is part of the reason why we strictly prohibit the promotion of the sale and use of the drug itself,” Rathschmidt said. “However, we work pretty hard to differentiate ads promoting the sale or use of the drug versus ads promoting advocacy or the legalization of the drug. The latter is the type of content we do not want to censor through ads, and is widely considered different than something promoting the actual drug itself.”