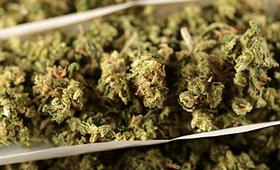 Marijuana users: They’re everywhere. But some have more power over society than others. That’s why the Marijuana Policy Project, the largest pro-weed group in the country, has released its annual list of the “Top 50 Most Influential Marijuana Users.”

The list ranks American pot users who have “achieved high levels of success or influence” – not just the most popular, but the most powerful. Number one on the list? President Barack Obama, enforcer in chief, responsible for more non-violent drug incarcerations than any of his predecessors.

“The goal here is to dispel the myth that marijuana users are losers who lack motivation and highlight the fact that they are typically productive and oftentimes quite successful,” said Mason Tvert, spokesman for the Marijuana Policy Group. “As this list demonstrates, many of our nation’s most successful citizens have used marijuana.”

The list includes many Americans who have spoken out in favor of saner marijuana law, but others have opposed reform despite their admitted use. The criteria for inclusion require that a person be a U.S. citizen or living in America and have used weed at least once. The selection is based on “power to influence cultural and social attitudes, political clout, individual wealth, and a person’s media profile.”

Following are some of the most prominent choices that made the group’s list this year:

No. 1. President Barack Obama. Obama’s administration has arrested and incarcerated more pot users and non-violent drug offenders than any other. Yet he continues to insist he considers weed a low priority. Obama long ago acknowledged that he “inhaled frequently” as a young man. “That was the point.”

No. 3 President Bill Clinton. His insistence that he tried pot “a time or two” but didn’t like it, “didn’t inhale and never tried it again” became a model of slippery political admission.

No. 4 Supreme Court Justice Clarence Thomas. Revelations that Thomas had smoked weed in college caused a road bump during his nomination in 1991.

No. 12 President George W. Bush. Bush refused to answer the marijuana question, but as with cocaine, it was an accepted fact.

No. 15 Sanjay Gupta. The neurosurgeon and CNN contributor acknowledged on air that he has smoked pot – and didn’t care for it. Gupta recently underwent a highly publicized conversion from medical weed opponent to supporter.

No. 22 Ted Turner. Also at CNN, Turner apparently likes to light up in his office.

No. 29 Martha Stewart. The queen of decor has admitted she “of course” knows how to roll a joint.

The actors and performers who populate the list – from Jennifer Aniston and Matt Damon to George Clooney and Snoop Lion – are too numerous to mention.