There’s a good reason to know the sex of marijuana plants. While growers may want to breed different strains, buds with seeds aren’t good smoke and the risk of pollination means getting male plants away from female ones before it occurs. Buds with seeds also means smaller buds overall, which is obviously not what you want if you’re growing for consuming. Home growers would want to propogate plants through clones or feminized seeds, unless they’re wanting to make a new strain or produce more seeds for growing. But how do you know which sex a plant is? Turns out it isn’t that hard to determine, but you might want to grab a magnifying glass.

One important consideration is the ability of cannabis to create hermaphrodite plants — that is, plants with both male and female organs. You’ll want to remove these plants if possible, as the development of a hermaphrodite plant means the plant is stressed. In fact, this process is called “herming out.” It means the plant is lacking nutrition, or is damaged, or environmental conditions are hurting it. Genetic strains prone to herming out are obviously not great either, unless you can give them the exact conditions needed to prevent it. The exception to this is if you’re deliberately trying to make feminized seeds, which is a rather specialized procedure that involves pollinating female plants with hermaphrodite pollen.

So back to determining gender, male sex organs on cannabis look like tiny bananas. Besides being adorable, they’re also bursting with pollen. Female organs look like what you find on most of the cannabis you consume: they have tendrils reaching out. Now, these are mature plants so by the time you see these easily the plants could be capable of germinating, or making seeds. What you want to do is find the male plants and isolate them away from the females before those “banana pods” open up. 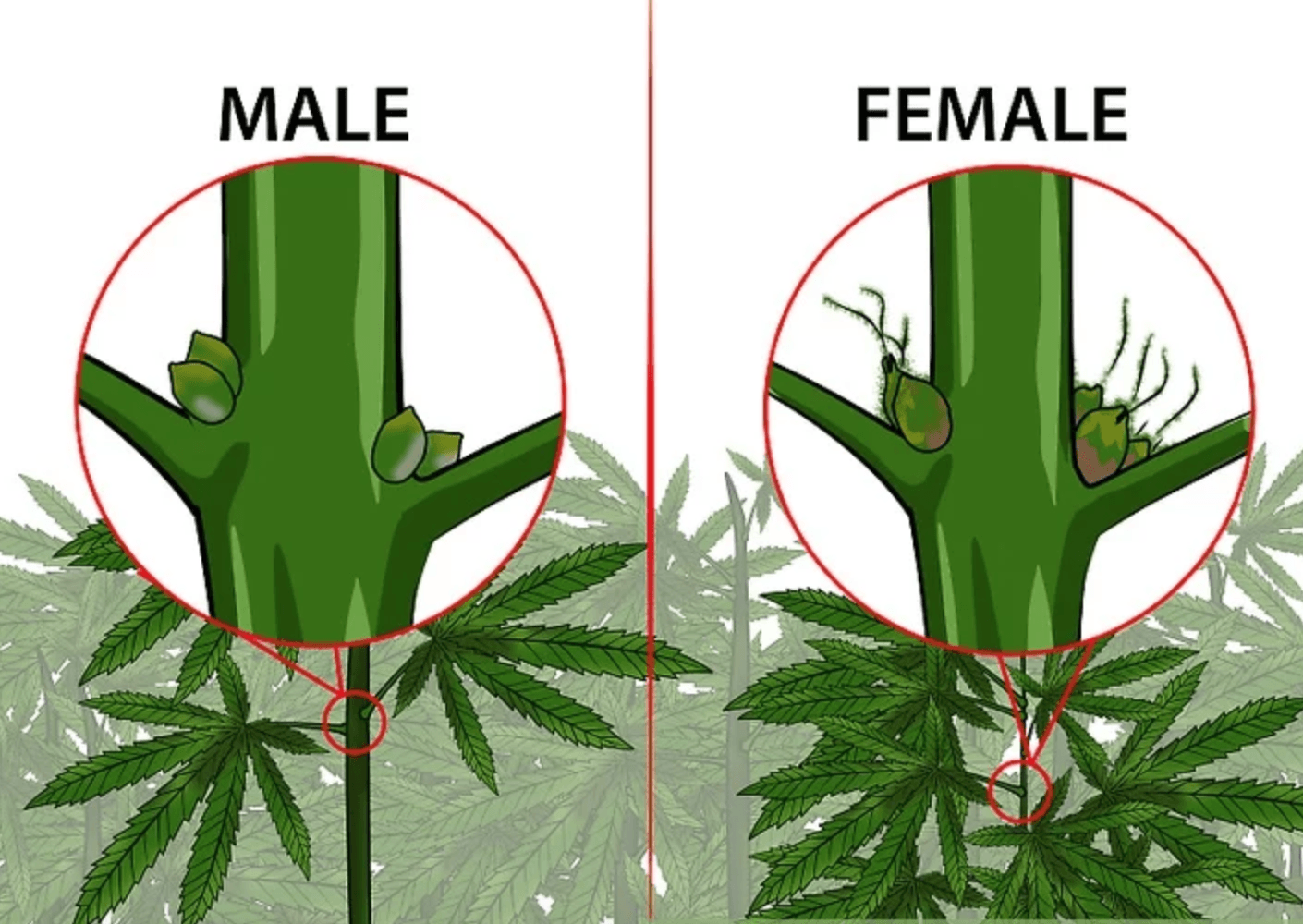 To figure out what gender the plant is, we’ll need to closely examine the young plants at what’s called the pre-flower formation. Logical, right? Well, this is where you’ll want a magnifying glass or even a jeweler’s loupe. The little area on the stem of a plant where more stems pop out is called a node. You’re going to look closely at these nodes to see if the tiny bumps growing there indicate male or female. Male plants will have little bumps that will become those pollen sacs. Females will have what’s called a stigma, basically a sticky little tendril that pops out to catch pollen. In the pre-flowering stage it’ll look a bit like a wisp of hair protruding from a very tiny wart at the node.

There are other ways of determining the sex of a cannabis plant, but this is the fastest and surest way. Female plants will have stigmas at the nodes, whereas males will just have a little bump that will become a pollen sac. The sooner you can spot these and separate any male plants, the better your yield will be, not to mention the quality of your smoke. Unless of course you’re just looking to propogate a new crop.