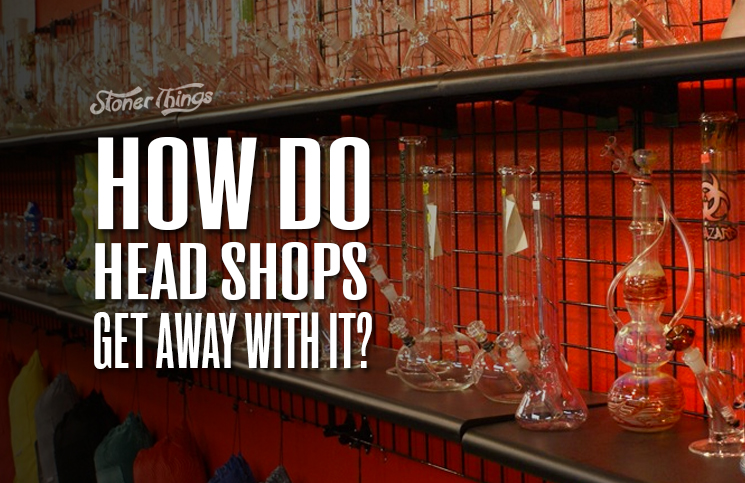 Weed is legal in a growing number of places, but in most of the country it’s still barred by federal and state law. So are the bongs, spoons, and bubblers that make up many a stoner’s collection.

How, then, do head shops get away with selling such paraphernalia? Surely the cops know about these shops, so why don’t they shut them down?

Well, sometimes they do. But mostly they don’t, and this has more to do with the practical realities of enforcing the law than it does with the law itself.

Almost every state that prohibits marijuana also prohibits paraphernalia. The federal government also bans marijuana accessories under the auspices of the “war on drugs.”

The state laws apply mostly to local head shops; the kind that can be found in most American metropolitan areas. These are the shops that sell bongs, rolling papers, hash oil kits and scales, among other items.

Some of this paraphernalia, such as water pipes, is user specific, meaning it’s designed to assist users. Other items are dealer specific, such as scales and plastic ‘baggies’.

Anti-paraphernalia statutes prohibit both types. Yet these accessories are commonly found in head shops that are rarely, if ever, raided. Why is this?

The answer is complicated, but the gist of it is that head shops will be left alone as long as they don’t promote the use of drugs. This is why almost every such shop in America has signs warning shoppers not to discuss illegal drugs.

The items are instead marketed as tobacco accessories. Of course, no one anywhere smokes tobacco through a bong, but the artifice is apparently enough to keep the police at bay.

That isn’t always the case. Although it’s relatively rare, cops have been known to raid head shops, even in states where cannabis is decriminalized. Police are usually more likely to go after actual drug crimes than paraphernalia crimes, though they’ll often charge people with both.

But the legal distinction between drug paraphernalia and tobacco accessories is so hazy that it wouldn’t seem to be very helpful. Yet the wink-wink, nudge-nudge arrangement seems to work in most places.

Police have more important things to do

The better explanation is that, in most cities, police have better things to do than raid head shops. That’s not to say it doesn’t happen – it does – but more that it’s a low priority.

Of course, once marijuana use is discussed in the open, all bets are off. That’s also the case when it comes to online paraphernalia sales.

Tommy Chong infamously went to jail over his web bong business. The feds, who have jurisdiction over interstate commerce, busted Chong after he personally advertised bongs for his son’s online head shop.

The lack of that kind of enforcement at the state level is only a good thing, but it leaves open the possibility that police anywhere could crack down on head shops if they so choose.

Whether that happens will largely depend on what the head shops do. The more explicit they become, the more they attract unwanted attention. So far, most shops walk the tight rope just fine. But that could change if marijuana opponents decide to play dirty.