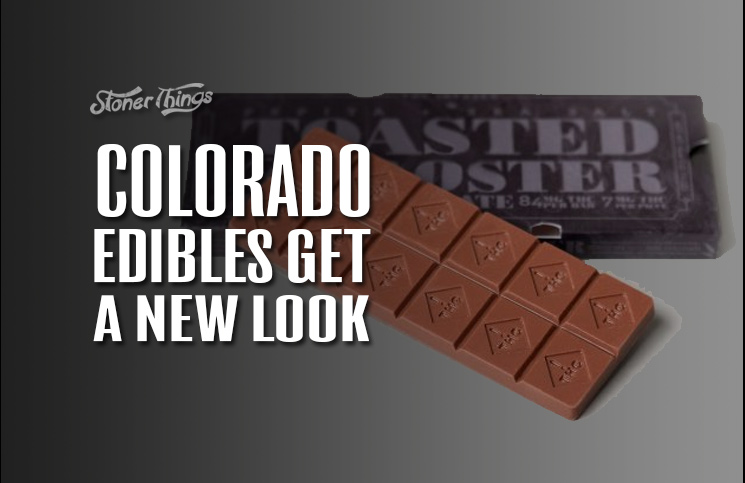 Confused Colorado stoners will have an easier time determining whether their chocolate bars, cookies, and iced coffee contain marijuana.

The new stamp required on all edible products sold in Colorado

State officials started enforcing a new rule in October that requires a stamp on all edible products to distinguish them from traditional food. All products must now contain a diamond-shaped stamp with the letters “THC” on both the packaging and the edibles themselves.

That means, for example, that a cannabis chocolate bar would come with multiple single-dose squares (usually 10 milligrams of THC per square), each with its own stamp. The rule took effect Oct. 1 and applies at every pot shop and medical marijuana dispensary across the state.

Lawmakers adopted the requirements in response to reports children were unwittingly eating marijuana-laced food they mistook for real treats. Parents complained there was no way to distinguish the two.

Colorado is the first state to impose such a regulation. Marijuana is also legal for any use in Washington, Alaska, Oregon, and the District of Columbia.

The new stamps are designed to make it easier for parents to know if their children are using cannabis, intentionally or otherwise. Edibles must include the stamp not only on each product, but on each dose of each product. That should make it harder for students to sneak even small amounts.

It should also make it easier for parents to identify THC-laced food without tasting or smelling it. The rule only affects legal sales, so children may still be able to get their hands on unstamped edibles, but the new regulation makes that less likely.

The requirement drew little opposition when lawmakers adopted it in 2015. Even the legal cannabis industry supported the legislation, with many business owners saying tighter protections for children would improve their reputation and make their shops more appealing to adult customers.

The stamp requirement took effect along with several other major regulations, including labeling and packaging rules such as childproof containers and warnings to keep the products away from kids. Users are also warned not to drive after eating marijuana and not to use it while pregnant or nursing.

“We want to ensure that people genuinely know the difference between a Duncan Hines brownie and a marijuana brownie, just by looking at it,” said state Rep. Jonathan Singer, who sponsored the legislation.

Accidental consumption of cannabis edibles remains rare, even in Colorado. A recent study of pediatric admissions at a Denver-area hospital in the years since legalization found more children have been hospitalized after eating cannabis, but it is one of the least common types of poisoning. Far more children are treated in emergency rooms after ingesting household cleaning products.

The most common reason for unintentional marijuana overdoses, the study found, was “poor child supervision or product storage.” But lawmakers hope the new packaging and labeling rules will cut down on the problem.

Leave a comment below: Do you think edible stamps like this are necessary to protect children? Is it worth the extra cost to consumers?