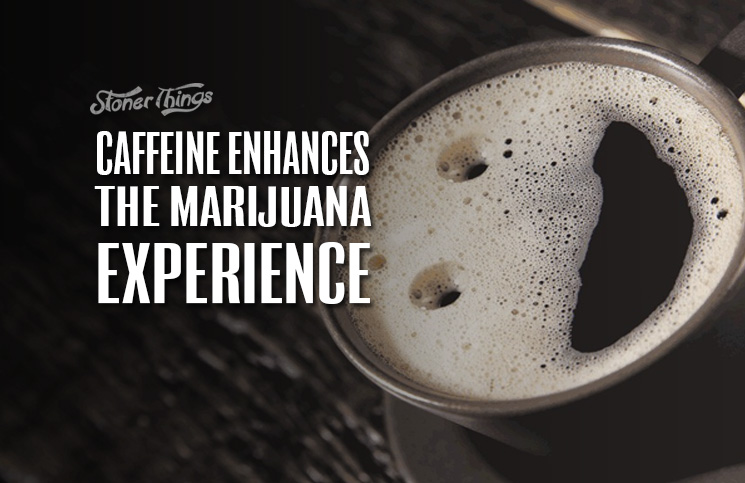 Apart from its well-known and extensively documented primary effects, marijuana is also known to interact with other substances, producing a range of combined effects that may differ considerably from those experienced by users who take marijuana alone. A few examples of these substances are alcohol and many pharmaceutical substances, which are especially known to produce a range of remarkable effects – some of them unpredictable – when combined with marijuana.

One substance that has recently come to the attention of scientists for its interesting interaction with marijuana is much more readily available, and arguably safer than alcohol or most pharmaceuticals. In fact, you have probably had a dose or two already today. It is caffeine, and medical science is just now beginning to realize the nature of its interaction with cannabis and its implications.

Many longtime marijuana users are familiar with the pleasurable sensations that accompany a dose of caffeine with a dose of THC. Few things seem to go as well together as a good cup of coffee and a few puffs of a high-quality strain, and it is common breakfast fare for countless users around the country. Until now, however, there has been little information on why this is so.

All that changed with a study that sought to examine the complex interaction between cannabis and other drugs, especially with regard to the brain. In one such study, scientists discovered that caffeine actually enhances the effect of cannabis, making it even more enjoyable than it already is. The study involved the administration of THC to squirrel monkeys, which have long been used for cannabis-related research. In this particular study, the monkeys had access to intravenous doses of THC, which were self-administered by the monkeys via a lever-equipped dispenser.

After the monkeys had become accustomed to dosing themselves with THC, they were then given varying amounts of MSX-3, which is chemically identical to caffeine in composition and effect. The researchers found that increasing the dosage of MSX-3 given to the monkeys resulted in reduced use of the THC administering lever. This would seem to suggest that caffeine somehow enhances the effects of THC, which means that the monkeys needed less of it.

Based on these studies, scientists theorized that caffeine and other A2A antagonist drugs reinforce the effects of THC, allowing users to experience the same effects even with lower doses of marijuana. However, the researchers also suggest that caffeine used in this manner may result in increased reliance on marijuana and/or caffeine. On the other hand, small doses of caffeine may actually have the opposite effect, and actually help wean people off marijuana.

At present, more research will need to be done in order to determine the full implications of caffeine’s effects with regard to cannabis interaction. With cannabis legalization rapidly spreading throughout the United States and increasing public tolerance, it might not be that long before cannabis and coffee becomes as ubiquitous a breakfast combination as bacon and eggs or cereal and milk.