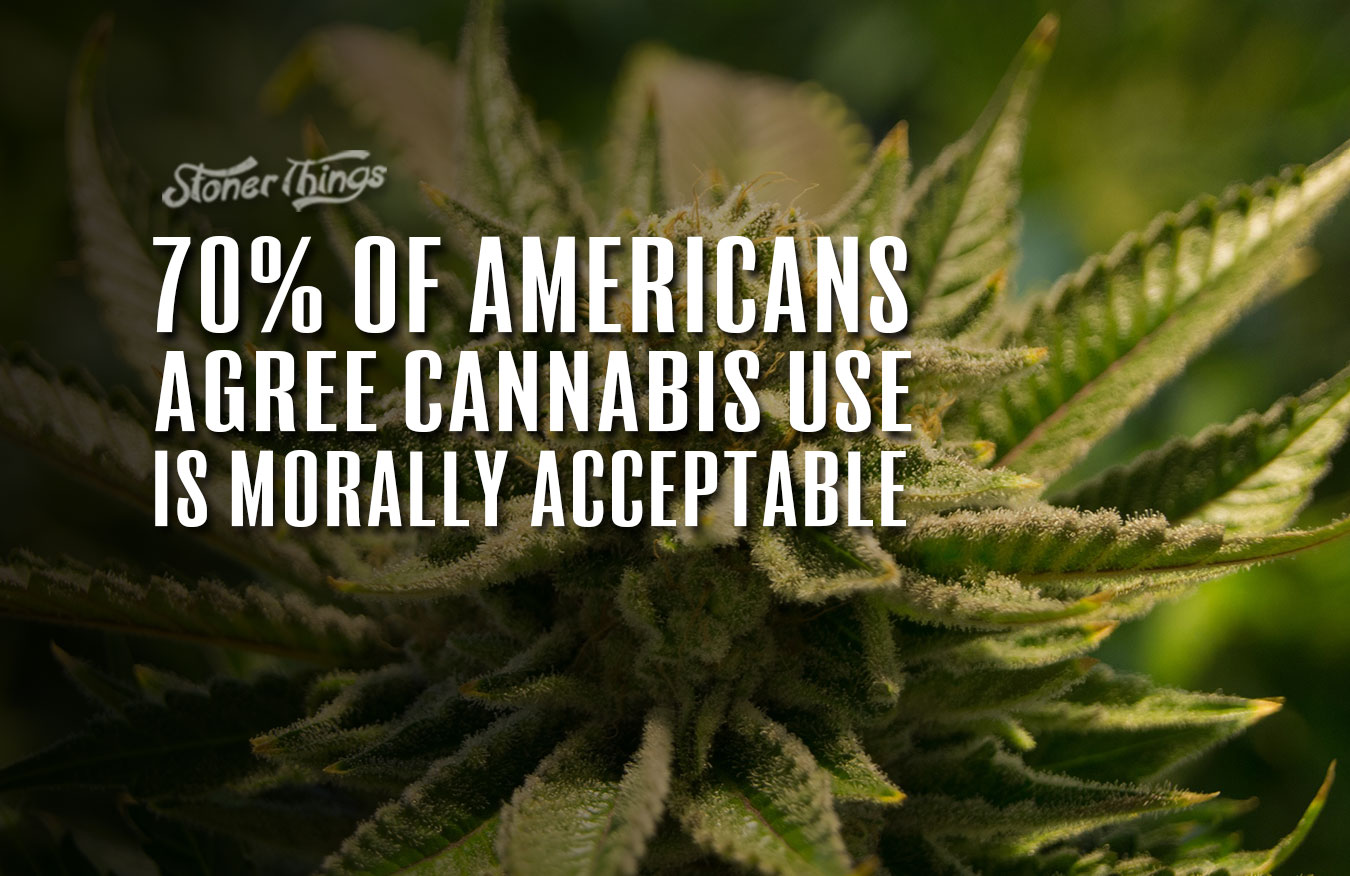 It seems that a few decades can really make a difference in public opinion. In the dawn of the 20th century, the powers that be created a racially-tinged campaign in the USA to demonize cannabis with the intent of making the plant illegal for any reason whatsoever. This was at a time when opium was freely available at pharmacies, too! Even so, decades of misinformation had its toll on the American psyche, leading to decades of harmful prohibition that still exists in a number of states thanks to Federal criminalization of marijuana. Although the 2018 Farm Bill made hemp legal, there hasn’t been a re-classification of marijuana for reasons that are still a bit mysterious. So it’s good to hear that public sentiment has changed a lot since the 1990’s, when the feeling around marijuana legalization was a non-starter for most Americans.

Now, a new Gallup poll shows a whopping 70% of Americans believe that cannabis use is morally acceptable. Gallup is one of the premiere survey-takers in the country, and arguably the gold standard when it comes to gauging public sentiment. The group has been using this survey to take the pulse of American sentiment on a range of social issues since 2001, and it includes stats on how people feel about the death penalty, gambling, and other things.

Curiously, 2% had no opinion or said it wasn’t a moral issue at all. The fact that something that should be established as a medical or scientific issue has become a moral one shows how the issue itself was politicized back in the early 1900’s. The fact that people tie morality to the use of cannabis further indicates the odd connections Americans make to policy decisions and morality. The rest of the world routinely looks askance at some behaviors in the USA as aberrant, only because policy has been influenced less by data and research but more by the fervor of the populace, and that includes “religiosity” that demonized substance use through the years. 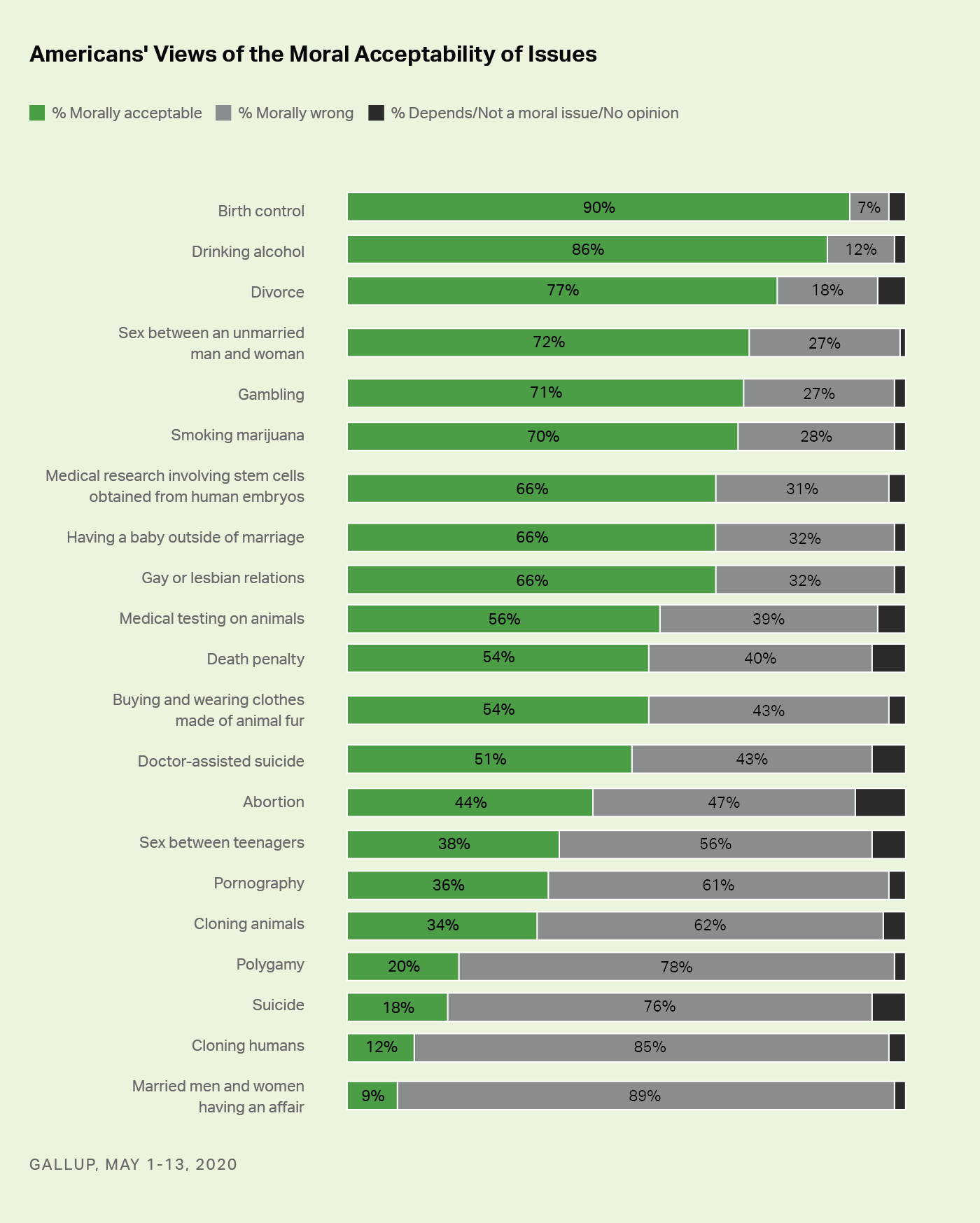 Luckily that tide is turning when it comes to marijuana, although there is still an ideological divide. The poll also included data for those who are “liberal” or “conservative”, and found that while smoking pot is acceptable with 84% of liberals, only 55% of conservatives see it thusly. Political affiliations may shift over time — just look up Southern Strategy and Dixiecrats for example — but the liberal/conservative polar opposites have largely remained constant over time. It’s a difference in viewpoint regarding morality as well, with some taking a dim view of behaviors they believe are amoral at best, or immoral at worst. 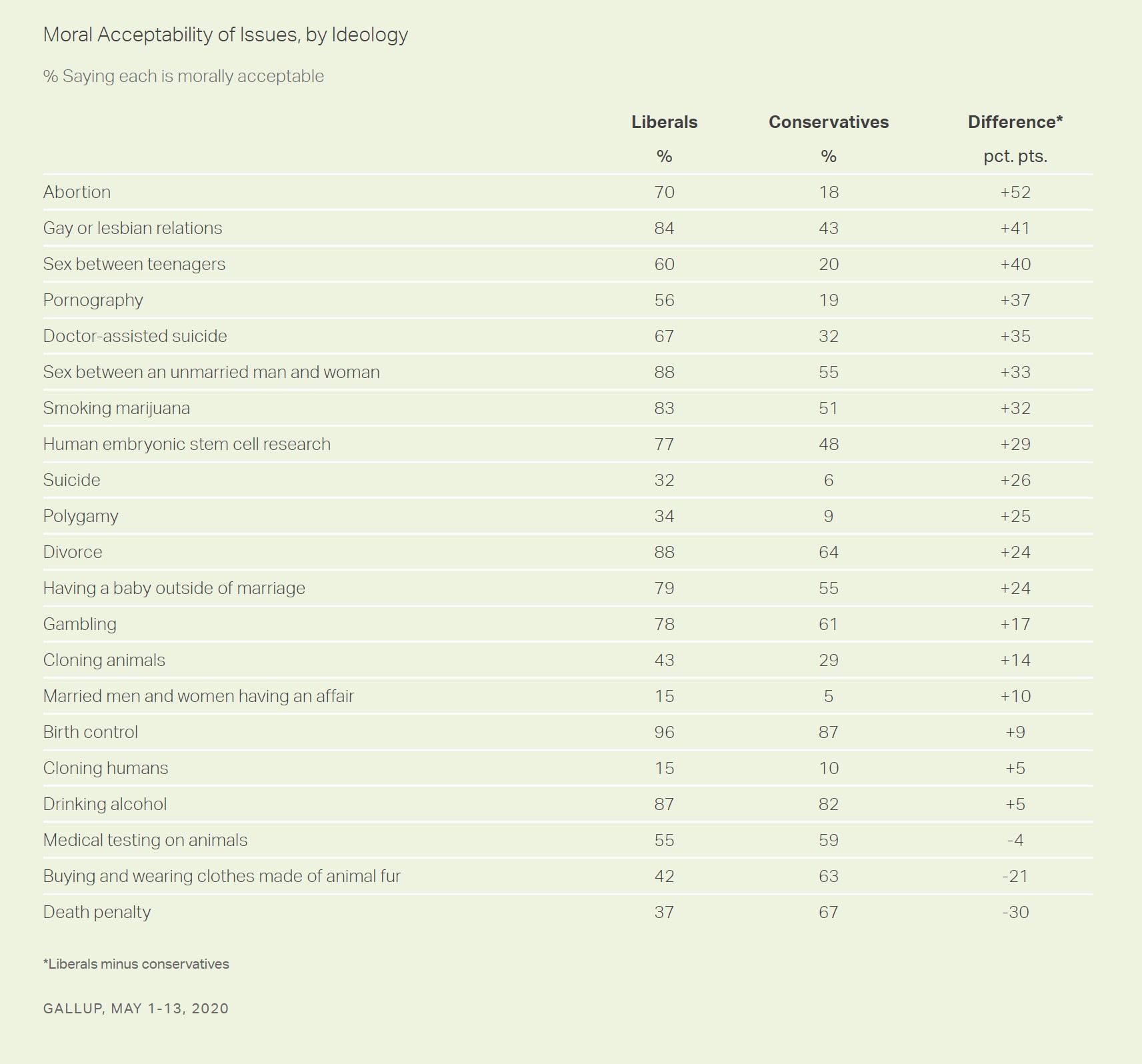 The study doesn’t dive into the rationale behind the sentiment, however, but it is telling in today’s acrimonious political arena that even among conservatives the morality of cannabis use is becoming more acceptable. It’s possible that with more states showing tax revenues, lower crime, and better health outcomes, more might be swayed by morals than prejudices that are mostly inherited. Luckily, the pleas of reason have not fallen on deaf ears in over two dozen states.