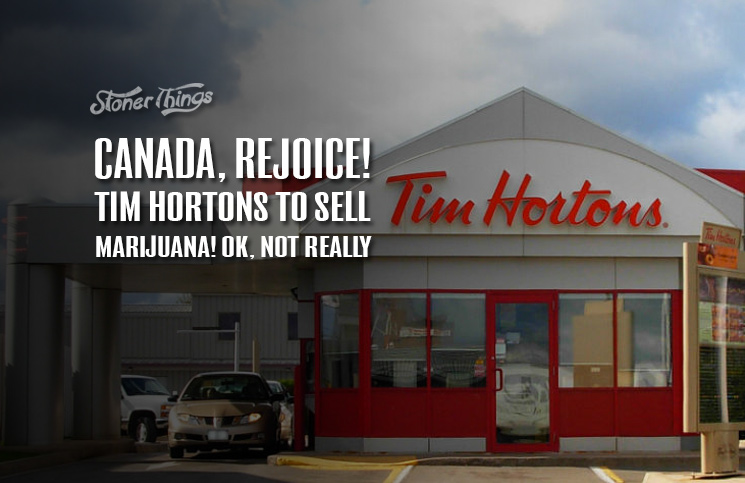 It’s yet another item in a never-ending parade of stories in which gullible potheads fall for hoax news articles claiming their favorite drug is on its way to their favorite fast-food restaurant.

McDonald’s. Burger King. Taco Bell. All these North American staples have had to shoot down rumors, usually coming from people with little grasp of irony, that they plan to introduce weed to their menus.

Now it’s Tim Hortons, the beloved Canadian chain of fast-food joints best known for their donuts and coffee to go. A recent article on a “news” website titled The Global Sun reported the restaurant chain would launch a cannabis menu item in 2017.

The article was published July 1 by the Sun, a parody site that runs mostly satirical pieces skewering mainstream media – a la The Onion. As often happens with these stories, some readers failed to pick up on the sarcasm and started spreading the claim as gospel. Pot is coming to Tim Hortons!

Even a lot of Americans could sympathize with the appeal of that idea. It would be something like allowing customers to spark up inside a Waffle House or IHOP while enjoying a double-double and a chocolate glazed.

“Canada’s most popular fast food restaurant franchise, ‘Tim Hortons,’ will now be selling marijuana upon its legalization in Canada,” the website claimed, referring to plans by Prime Minister Justin Trudeau to legalize the drug in 2017.

If only. These stories aren’t entirely implausible; Taco Bell and McDonald’s already serve alcohol at limited locations in the United States. Why not weed?

Public use of cannabis is prohibited

Well, for one thing, even in places where cannabis is legal for any adult use, there are few if any places open to the public where users can legally partake. Public consumption has been banned in every jurisdiction with legal marijuana, and there is little chance that trend will change soon.

If Trudeau follows through on his pledge to legalize, cannabis could be available in retail stores across Canada within a couple years. It’s already relatively easy to get in the form of legal medicine, though the government long fought to abolish that program.

Trudeau and his triumphant Liberal Party, which swept back into power last year after a decade in the minority, made legalization one of their key campaign issues. Trudeau announced plans to carry out the promised reforms shortly after taking office.

Canada to legalize marijuana in 2017

Liberal members of the Canadian Parliament plan to introduce legislation next spring that would make marijuana legal for recreational use by adults over 21. Farmers would be allowed to grow the drug for commercial distribution, and retail stores would be permitted to sell it.

Sadly, Tim Hortons has been silent on the recent rumor, a sure sign the company has no plans to start serving Sour Diesel with jelly donuts anytime soon. The Global Sun, like The Onion, is strictly a humor magazine, so readers should assume anything published there is false – especially if it involves cannabis and fast food.

Tell us what you think: Will restaurants like Tim Hortons ever really sell marijuana on-menu? When? Drop a comment below.