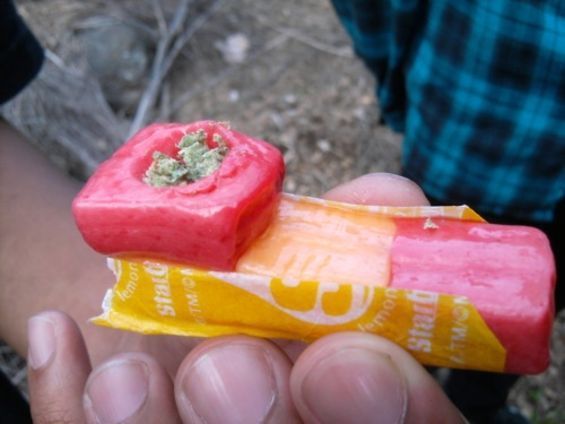 Whether it’s a bong, a bowl, or a bubbler, every stoner has a favorite pipe, a piece to return to when the others aren’t doing the job.

Good cannabis pipes can run into the thousands of dollars. And cheap pipes often don’t work very well, forcing repeated trips to the head shop. But if all else fails, and you’re stuck in the field without a pipe, fear not! Creativity will always save the day.

MacGyver never made a bong (on TV, anyway), but he’s a constant inspiration to dirt-broke tokers and artists with too much time on their hands. Here are the five best handy homemade marijuana pipes, in no particular order. 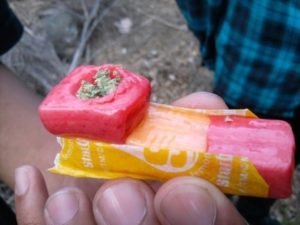 Sticky icky indeed. The Starburst pipe is a tasty way to ingest cannabis, and you can eat it when you’re done. But you should probably rinse it out first, unless you want a mouthful of residue.

It’s an easy pipe to make. Just take three Starburst chews, lay them flat, and squish them together. Use a skewer to burrow a tunnel through all three squares (but don’t push all the way through on the other end).

Now, take a fourth chew and place it on top of the last of the three bottom squares (the one that isn’t skewered all the way through). Carve a bowl in the top square and connect it to the long tunnel – and voilá, you have a weed pipe!

If you want, you can add a carb. Just skewer a second hole on the right or left side of the chew beneath the bowl. This contraption is really only good for a hit or two, but it’s great in a fix and easy as it comes. 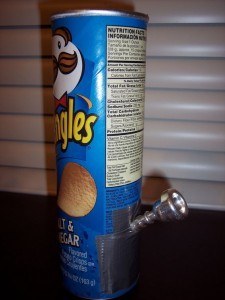 This is a classic, and like the Starburst, it’s ridiculously simple. First, take a can of Pringles. Second, eat the Pringles (or put them in a bag or something). Third, make a stem for your bong – the shell of a pen works well.

Fourth, cut a small hole through the cardboard on the side of the can, a couple inches from the bottom. Cut the hole wide enough for the stem to fit through snuggly. The less air that gets out, the better the smoke. Seal the hole with duct tape or chewing gum, and that’s it. 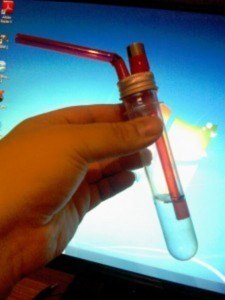 Finally, fill the test tube part way with water, insert the straws, and you have a bubbler! You also have a handy way to toke in secret if you work (or live) at a lab. 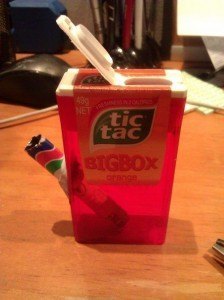 Stick a hole in the side of a Tic Tac container, insert a stem with a bowl (preferably metal or wood, though foil will do in a pinch), open the cap, pour a touch of water in, and light up.

You can also tape a couple containers together, end-to-end, to make a bigger chamber and a real “bong.” Either way, you’ll have a pocket size pipe you can take with you anywhere. 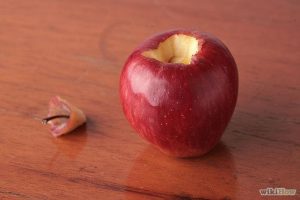 If you haven’t tried to carve at least one apple (or melon or pineapple, etc.) into a pipe, you can’t really call yourself a stoner. They don’t last long, but there’s usually an apple nearby, the job takes a couple of minutes, and the only other thing you’ll need is a pen.

Make sure you use a ripe, crisp apple. A mushy apple could fall apart when you poke holes in it. Use a pen with a removable ink well so you don’t get ink all over the fruit.

Remove the stem. Get the whole thing; if it breaks, dig it out with your fingers. Next, bore a hole through the top of the apple with the pen. Push the pen about halfway into the apple. Remove the tip from the pen and push the tube into the apple to expand the the hole.