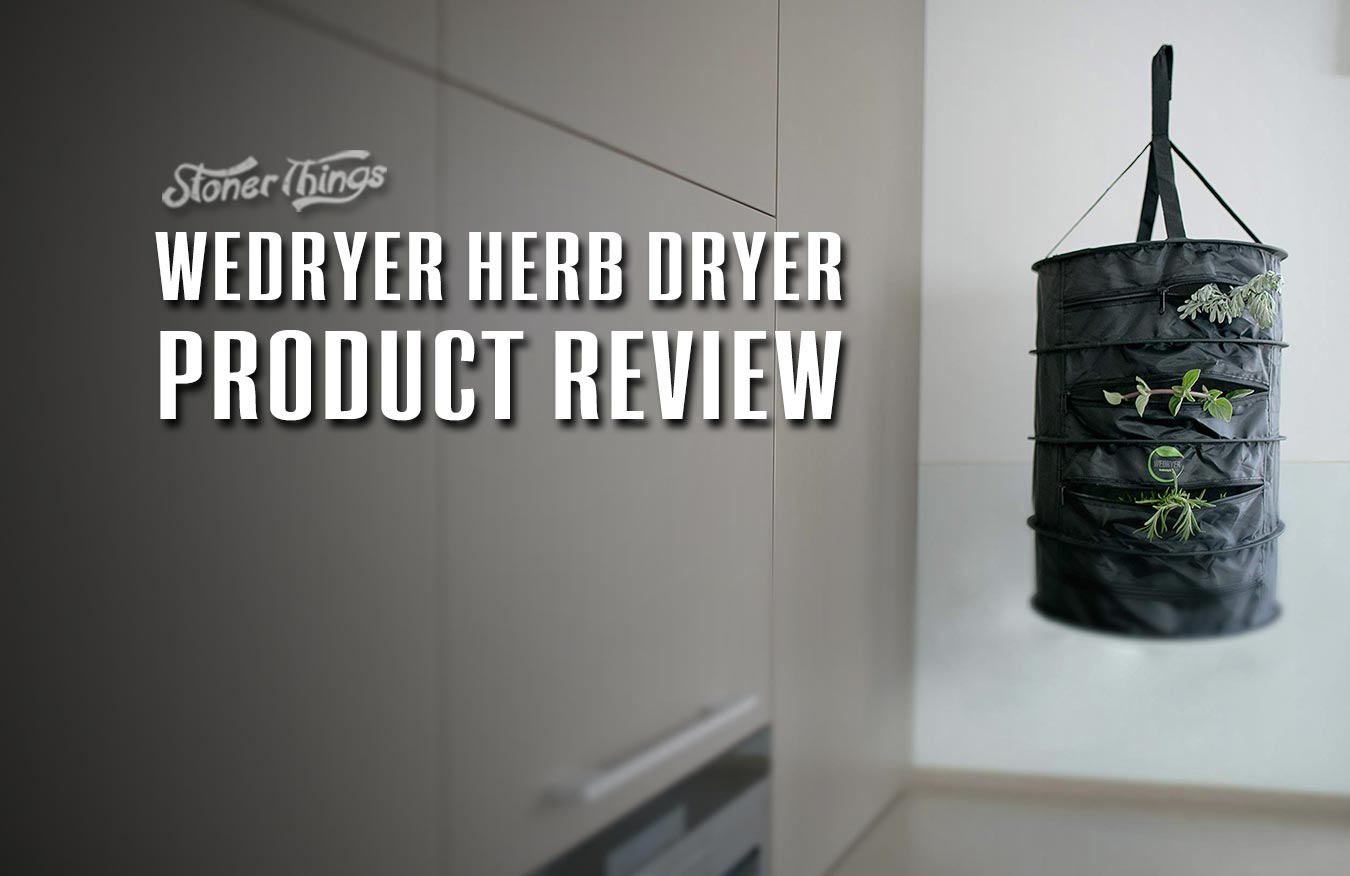 I needed to make a change. It just took some time (and a broken box fan) to move me in the right direction. The WeDryer Herb Dryer was my solution.  In this WeDryer review, I’m going to share my personal experience and let you know how much this product has changed my life.

First off, nothing screams, ‘I just harvested weed’ louder than:

I’ll be honest: I’m sort of cheap, and I’m also stuck in the ‘way we do it’ era of marijuana growing and processing. I have the fans and dehumidifier and netting, so I do it the way I’ve always done it, year after year. Harvest the plant, hang the sticks, throw the random buds into the drying rack and turn on the fan and dehu…

But this year, I was getting sick of devoting half of my living space to drying. Then the fan took a crap, and I decided that this was a sign from the canna-gods. So after checking out some herb dryer reviews, I settled on the WeDryer, and now my only regret is not changing my drying game sooner.

My mood always soured during harvest. Untangle the trellis netting, hang it from the ceiling, get tangled in trellis netting, get pissed off . . . then weave a dowel or broom handle through the bottom of the trellis netting and start hanging sticks. Continue to get tangled in trellis netting. Remain irritated. Realize that there are a bunch of lovely fat little buds that can’t hang on the netting. Dig through the garage and locate the stinky old herb rack. Throw fat buds into stinky herb rack. Plug in the bulky, crappy box fan. Plug in the bulky, crappy dehumidifier. Remember to empty the dehumidifier. Check the buds for mold. Rotate the buds. Move the fan. Empty the dehumidifier. Repeat. Get pissed. Repeat. Smoke some of last year’s weed for anxiety-reducing purposes. Wish that your new crop is ready for consumption.

I finally changed my drying game after my fan kicked the bucket. I was already sick of the vast footprint that my drying process took up. I was over worrying about moisture levels and airflow. I was just done with random visitors giving me ‘the look’ when hit with the stank of fresh weed. It’s not like I was trying to hide anything; after all, marijuana (both rec and medical) is legal where I live — but I also don’t want to go around and advertise that I have a bunch of weed drying in my house. So I finally knew that I needed a different approach.

I did a quick internet search and found the WeDryer. I was sold on the price first. You had your pick of two sizes, and both were under a hundred bucks. So I bought the larger one and decided to see if it lived up to the product claims.

It did. I was sold on the product within the first day and bought a second unit within a week. You see, I manicure harvest my plants, and this means I have a steady supply of fresh cannabis to dry in stages. I used one WeDryer for my Jaeger and bought the second WeDryer for my Blue Widow nugs. I’m sort of pissed I didn’t update my drying method sooner, but I’m stoked with what I’m working with now.

Let’s talk about space. As in space-saving. First, the WeDryer can hang in a corner from one hook. This is in stark contrast to the twelve hooks I have lodged in my ceiling to hold trellis netting. With the WeDryer, I hung it up, put a bunch of lovely little buds in it, and plugged in the fan. It was whisper-quiet, and a significant improvement over the constant dull roar of my previous fan. And smell? What smell? The filter meant that the stanky factor was out. Done. Gone. I used one filter for the entire season. No more ‘I know what you’re doing’ looks from the mail lady.

And stress about mold? Nope! What stress? Thanks to the fan’s constant airflow, I wasn’t poking around, paranoid about mold. I wasn’t dumping a dehumidifier. I wasn’t hearing phantom fan noises when I was out and about. The unit did its job and did it well. My anxiety level plummeted.

The entire process was simple. Stress-free. The end of the drying process was smooth, and cleaning up was a breeze. I put my dried buds in jars, removed the fan and filter, shook out the collapsible WeDryer, and put everything into the carrying case. It fit in a little nook in my garage, ready to go for the next harvest. I’ll leave the angst of trellis netting to someone else. From now on, I’m hooked on my WeDryer for drying.

Watch the unboxing video courtesy of WeDryer below.